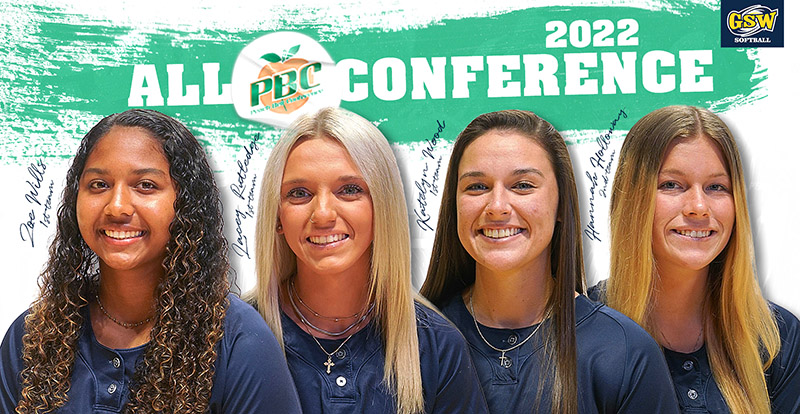 Katelyn Wood had an incredible final season at GSW, batting .382 with 12 home runs and leading the league in RBIs by a wide margin. Wood was also tied for fourth in RBIs in the NCAA Division II rankings. In addition to those accomplishments, Wood was also second in hits, third in doubles, fifth in home runs, fifth in slugging percentage and sixth in batting average this season in the PBC. The junior from Crawfordville, FL. had four or more RBIs in seven different contests, including seven on March 20 against Georgia College.

Lacey Rutledge‘s first season at GSW was a massive success. The Georgia Highlands College transfer hit .358 with three home runs and 26 RBIs. In her first year in the conference, Rutledge led the league in triples and was third on the team in batting average, hits, and doubles. Rutledge had her best series against Columbus State, hitting .400 with one home run and four RBIs.

Hannah Holloway was the ace for the Hurricanes this season, starting in 19 games and finishing the regular season with 15 wins. Holloway pitched 127 innings for GSW and had 97 strikeouts this season. The 15 wins are second most in the conference, while also being ranked fifth in ERA, seventh in strikeouts and eighth in opposing batting average. Holloway has thrown 10 complete games this season, with two of them coming in wins against second-ranked Valdosta State and regionally-ranked Lander University.

Zoe Willis became the first GSW softball player to be named PBC Player of the Year. The sophomore from Pine Mountain, GA. hit .433 with 16 home runs and 46 RBIs. She led the PBC in four different hitting statistical categories and was ranked second in two others. Her best game came against Young Harris College on March 5, when she went 3 for 4 at the plate, hitting two home runs and six RBIs. During her series against Augusta University, Willis had a slugging percentage of 2.200. Willis is a Triple Crown threat in 2022 and leads the league with a .950 slugging percentage, which is ranked third in NCAA Division II. Willis is also ranked 10th nationally in home runs. Named the PBC Player of the Week on April 25, she has five multi-homer games this season and four games with three or more RBIs.

The four selections are the most in program history and they come after the team set the record for most wins. The 2022 GSW Lady Hurricanes are the first GSW softball team to reach 30 wins in a season.

The Lady Hurricanes and their four PBC All-Conference Team selections will continue their historic season on Friday, May 6 against Young Harris College in the Peach Belt Conference tournament.