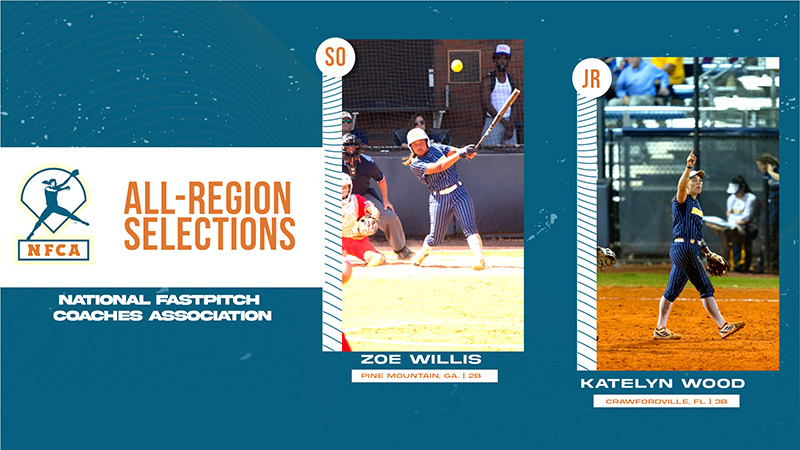 LOUISVILLE, KY – The Georgia Southwestern softball team had two players named All-Region by the National Fastpitch Coaches Association (NFCA). Katelyn Wood and Zoe Willis become the first pair of teammates to be honored All-Region in the same season, both players were recently selected for first-team All-Conference and Zoe Willis was selected as the Player of the Year in the Peach Belt Conference.

Katelyn Wood had an incredible final season at GSW batting .382 with 12 home runs and leading the league in RBIs by a wide margin and was tied for fourth in RBIs in the NCAA. Wood was also second in hits, third in doubles, fifth in home runs, fifth in slugging percentage, and sixth in batting average this season in the Peach Belt. The junior from Crawfordville, Fla. had four or more RBIs in seven different contests including seven on March 20th against Georgia College.

Zoe Willis, a sophomore from Pine Mountain, Ga. hit .433 with 16 home runs and 46 RBIs, she led the Peach Belt in four different hitting statistical categories and was ranked second in two others. Her best game came against Young Harris on March 5th, when she went 3-4 from the plate hitting two home runs and six RBIs. During her series against Augusta Willis had an unheard of slugging percentage of 2.200. Willis is a triple crown threat in 2022. She leads the league with a .950 slugging percentage, which is ranked third in NCAA Division II. She is also ranked 10th nationally in home runs. Named the PBC Player of the Week on April 25, she has five multi-homer games this season and four games with three or more RBIs.

The awards honor softball student-athletes from the Association’s eight regions with first and second-team selections. NFCA member head coaches from each respective region nominated their student-athletes and voted on the teams. All the honorees are now eligible for selection to the 2022 NFCA Division II All-America squads.

Conference players and pitchers of the year from member institutions (must be nominated by member head coach and receive votes) are added to the second team if they were not already voted to an All-Region squad. Additionally, in some instances, limited regional nominations prevented a position from being filled.

The 2022 NFCA Division II All-America teams will be announced on Wednesday, May 25. The rest of the Southeast All-Region Selections can be found below.