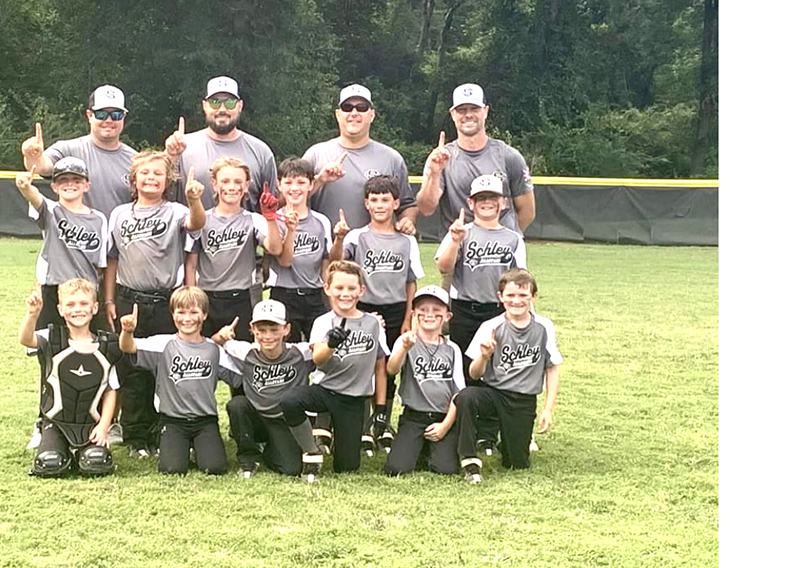 ELLAVILLE – The Schley County Wildcats 8U All-Star team went to Crawford County this past weekend to participate in the Division 2 District Tournament with a chance to go to the State Tournament on the line. They started the tournament off playing the Dooly County All-Stars. The Wildcat offense was firing on all cylinders, being led by Jake Lightner, Braxton Gordon, and Gage McCorkle who all had three hits in the game. Rome Gable, Charlie Calhoun, Cavan Jacobs, Kamden Hughes, and Flint Melton also posted multi-hit games as well. Braxton Gordon led the team in RBIs with 4 and runs with 3. He also had an inside-the-park homerun along with Flint Melton. The Wildcat defense was also stellar as they shutout Dooly County with a final score of 19-0 in two and a half innings.

Schley moved on to a match-up with the All-Stars from Lamar County who came into the game with a 2-0 record in the tournament. The offensive and defensive dominance continued as Braxton Gordon posted another three-hit game and Rome Gable, Eli Elliott, and Charlie Calhoun had multi-hit games as well. Eli Elliott led the team in RBIs with three while Charlie Calhoun led the team in runs reaching home plate three times in the game. The Schley County defense continued to lock down the base pass to finish out Day 1 of the tournament with a 12-1 win in five innings moving to 2-0 in the tournament.

On Sunday, the Wildcat All-Stars opened up the day with a game against Crawford County with Crawford County on the verge of elimination coming in with a 2-1 record in the tournament. The boys from Schley picked up where they left off on Saturday on offense with Jake Lightner, Charlie Calhoun, and Flint Melton having three-hit games and Jase Rogers, Cavan Jacobs and Braxton Gordon having multi-hit games. Flint Melton and Rome Gable both hit inside-the-park homeruns while Flint also led the team in RBIs with 3 and runs with 4 in the rout of the Crawford County All-Stars 19-4 in 6 innings.