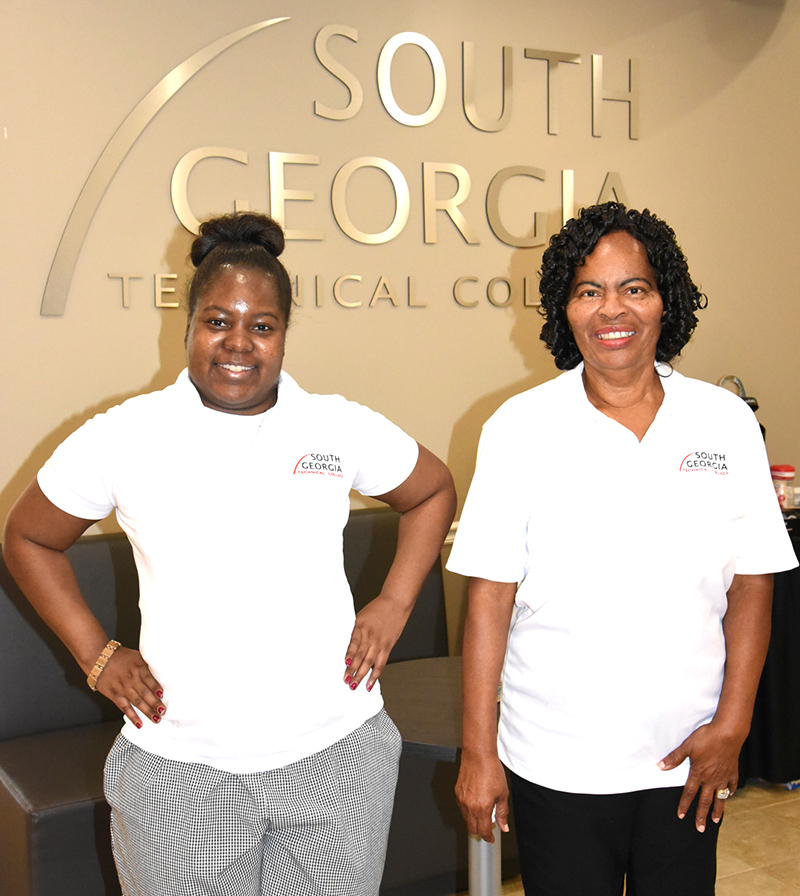 Janelle Dodson (left) and her grandmother, Alice Bridges (right), are both enrolled in the SGTC Culinary Arts program this summer. Photo by SGTC

AMERICUS – Nearly 45 years of life experiences separate Alice Bridges and her granddaughter, Janelle Dodson, but because of a love of cooking and a desire to own and operate their own restaurant, the two have both enrolled in the South Georgia Technical College Culinary Arts program this summer.

“This has been a lifelong dream of mine to get an education,” said Alice Bridges, when she was asked why she decided to enroll in the South Georgia Technical College Culinary Arts program.  “I attended technical school in the late 70’s or early 80’s, but had to drop out because I had young children and was working.  After my granddaughter signed up and I saw what she was doing, I decided I was going to take advantage of the opportunity and come back.”

Her granddaughter, Janelle Dodson, is a 2016 graduate of Americus High School and enrolled at South Georgia Tech after high school.  She visited the college on a tour with her classmates.  She started in Culinary Arts and then switched to Cosmetology.  She decided to return this past Spring and switched back to Culinary Arts where her grandmother joined her for summer semester.

Both Janelle and her grandmother, Alice, said they like to cook and have wanted to start their own business.  Graduating from the Culinary Arts program at South Georgia Technical College would help that dream become a reality.

In addition to taking classes together, the two are also neighbors.  They commute to class together and also help each other with their assignments.

“We are here for each other,” said Alice Bridges.  “I was worried that I might not be able to do the work, but I am really enjoying it.”  In fact, Janelle said that her grandmother might just be the better student.  “We have fun and Chef Ricky is a great instructor,” said Bridges.  “Opening up my own business has been a lifelong dream and together with my daughter, Antionette Hayes, and my granddaughter, we just might be able to make that a reality.”

Even though she is 70 years old, Alice Bridges said, “I have things I want to do with my life.  I am not ready to retire.  And I think I might be setting a good example for my daughter and granddaughter and others by coming back and getting my education.”

Both Bridges and Dodson bragged on “Chef Ricky” Watzlowick and his teaching style.  “He is a cool teacher and I think he is awesome,” said Dodson.  Her grandmother agreed, “I like the fact that a lot of his program is hands on.  I feel like I learn better when I get to work with my hands and my mind,” said Bridges.

South Georgia Technical College is currently enrolling students for Fall Semester.  Classes begin August 18th.  Registration and orientation for Fall Semester will be held on Tuesday, July 19th on both the Americus and Crisp County campuses.  In-person orientation sessions will be held at 9:30 a.m., 1:30 p.m. and 5 p.m. in the Pope Center on the Americus Campus and at 9:30 a.m. and 5 p.m. on the Crisp County campus.

To apply for Fall semester, contact Admissions Director Candie Walters at cwalters@southgatech.edu or the admissions office at 229-931-2394 in Americus or 229-271-4040 in Crisp County.  Students can also apply online at www.southgatech.edu.