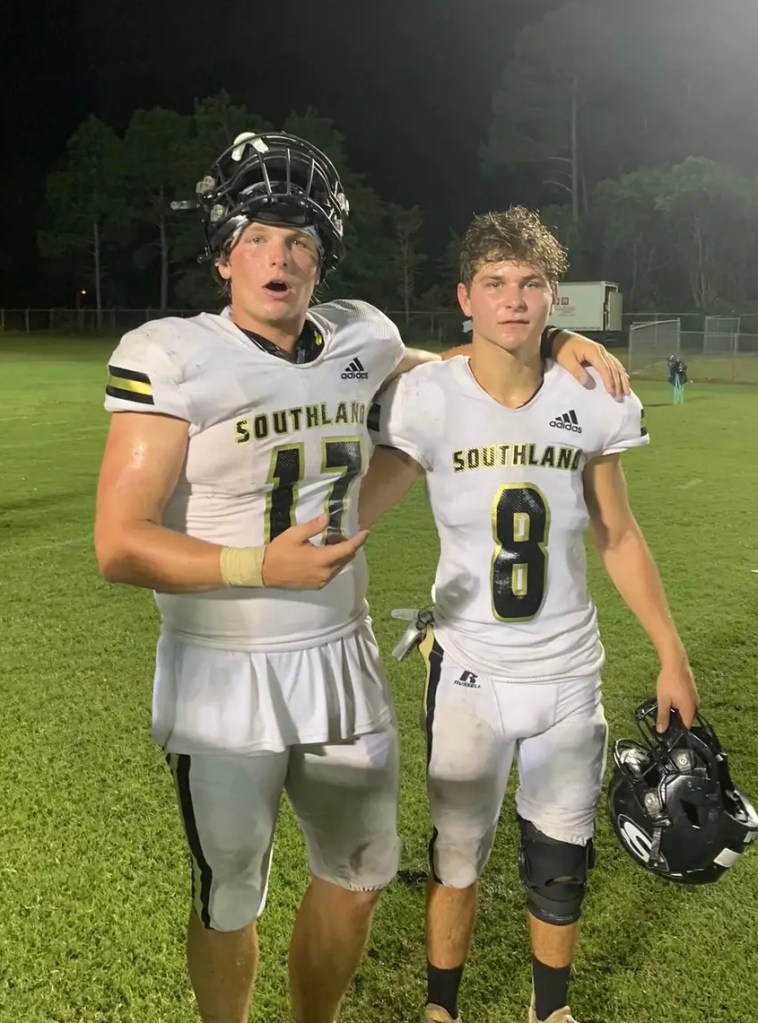 SAR quarterback Chase Ledger (17) poses with his teammate, running back Keaton Griffin, for a picture after the Raiders’ 21-20 victory at Taylor County. Photo by Jollie Ledger

BUTLER, GA – For possibly the first time ever, Southland Academy, a member of the Georgia Independent Athletic Association (GIAA), the athletic arm of the Georgia Independent School Association (GISA), took on a Georgia High School Association (GHSA) team to open its football season. The Raiders made the trip up U.S. Highway 19 to Butler, GA with the hope of toppling their GHSA Class A-Public opponents, the Vikings of Taylor County (TC). Thanks to the play of SAR senior quarterback Chase Ledger and his teammates, as well as a missed extra point by the Vikings, the Raiders were able to come away with a 21-20 victory over TC to open the 2022 season.

“Our kids never gave up. They found a way to win the game. Our kids responded to adversity very well and stayed together,” SAR Head Coach Rod Murray said. “Taylor County was a great host and well coached. They were very physical and played the game the right way. Our position Coaches and players found a way for positive things to happen during adverse situations. It was just a joy to watch these guys stay calm and work,” Murray continued.

TC took the lead first when running back Cam Lawhorn scored from four yards out. The extra point by Cody Moncrief was good and SAR trailed 7-0.

However, Ledger and company had a quick response. The senior quarterback was able to connect with Cedric Smith for a 33-yard touchdown pass. The extra point by Henry Johnson was good and the game was tied at 7-7.

The Vikings countered with another touchdown by Lawhorn, this one from eight yards out. However, Moncrief missed the extra point and that proved to be the most crucial play of the game.

The Raiders responded by mounting a drive that resulted in a 40-yard field goal by Johnson to cut their deficit to 13-10, but the Vikings responded again as running back D.J. Jenkins scampered 40 yards for a touchdown. Moncrief’s extra point was good and the Raiders trailed 20-10.

SAR responded with a 31-yard field goal by Johnson, but the Raider defense was able to hold the Vikings on offense so that the Raider offense would be able to pull off the game-winning drive. That drive ended with a 44-yard touchdown pass from Ledger to Perry Usher. However, instead of kicking the extra point to tie the game, Coach Murray decided to go for the win with a two-point conversion. The Raiders were able to convert the two-point try as Ledger found Trey Sellars in the end zone for what ended up being the game-winning play, giving the Raiders the 21-20 victory.

Ledger was solid on the night for SAR. He completed 13 of 22 passes for 187 yards and two touchdowns. Ledger also ran the ball well for the Raiders as he gained 44 yards on 16 carries. Backup quarterback Banks Simmons had a brief appearance in the game and completed two of four passes for 21 yards.

SAR will try to improve to 2-0 when they host another GHSA Class A-Public team, the Eagles of Marion County, on Friday, August 26 at 7:30 p.m.