Turnovers, penalties and poor tackling lead to Southland’s loss at home to Westfield 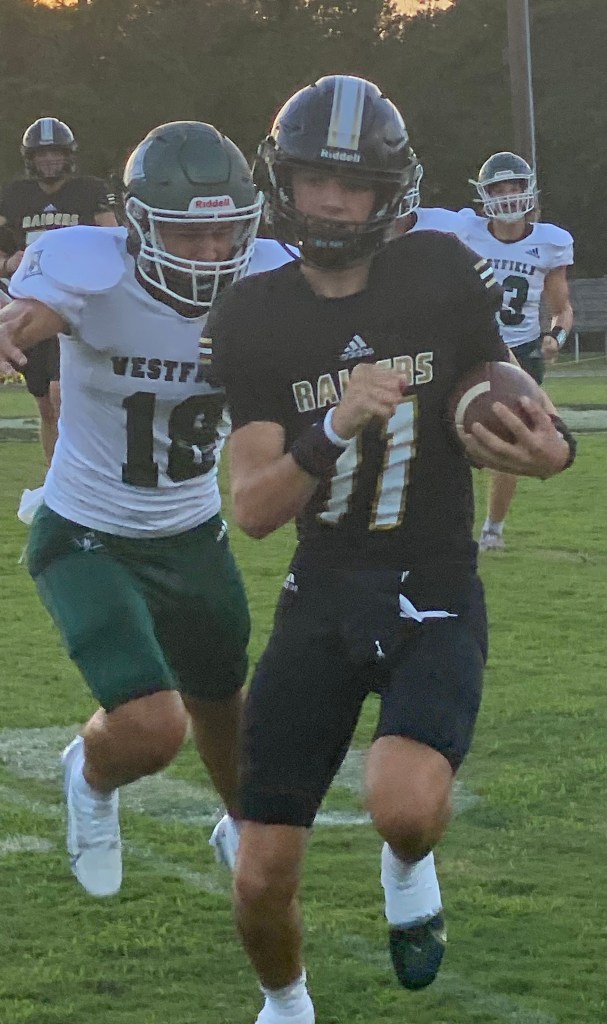 Southland Academy quarterback Banks Simmons uses his legs to gain yardage. Simmons came into the game for starter Chase Ledger, who had to leave the game for a play due to his helmet coming off. Photo by Ken Gustafson

AMERICUS – After having defeated two GHSA schools to begin their season, the Southland Academy Raiders (SAR) came into Friday night’s tilt at Harvey Simpson Stadium against a struggling 0-2 Westfield squad (WS) hoping to earn a victory over the Hornets and stay undefeated at 3-0. However, WS did not look like an 0-2 team and had a 21-14 lead over the Raiders at the half. Unfortunately for SAR, things did not get better as the game went on. Turnovers, penalties, an inability to sustain drives on offense and an inability to make tackles on defense plagued the Raiders throughout the contest and it led to their 48-14 defeat at the hands of the Hornets on Friday evening, September 2.

The Raiders won the coin toss, but elected to defer till the second half. This gave the Hornets the chance to score on their first possession. Henry Johnson’s kickoff went out of bounds, which allowed WS to have the ball at its own 35-yard line. The Hornets took advantage of the field position as quarterback Hunter Kirkley threw a short pass to Ryan Powers. Powers then broke free and ran the ball down the sidelines for a 65-yard touchdown. The extra point was good and SAR trailed 7-0 early in the first quarter. 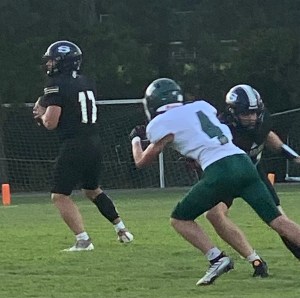 Southland Academy quarterback Chase Ledger is back to pass against Westfield. Ledger threw one touchdown pass and ran for another, but threw three interceptions on the night.
Photo by Ken Gustafson

The Raiders tried to answer on their first possession, but on second down and 16 from the SAR 48, quarterback Chase Ledger’s pass was intercepted by WS defensive back Jackson St. Clair. The Hornets took advantage of the turnover by mounting a drive that ended up at the SAR two-yard line before Kirkley finished the drive with a touchdown on a quarterback keeper. The extra point was good and the Raiders trailed the Hornets 14-0 with 5:05 to go in the first quarter.

On their next possession, the Hornets had the ball down on their own two-yard line. However, Kirkley managed to elude the rush in his own end zone and delivered a long pass to St. Clair that ended up near the SAR 20-yard line. Fortunately for the Raiders, a personal foul was called against WS and it nullified the play. The Hornets would eventually have to punt the ball away on fourth down. 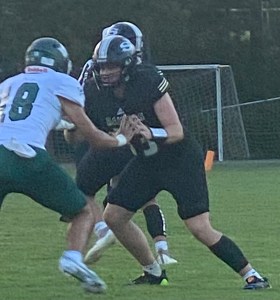 On the Raiders’ first play from scrimmage from the SAR 47, Ledger threw a short pass to Henry Johnson that gained six yards. Then Ledger completed a pass to Perry Usher for a 20-yard gain at the WS 27-yard line. Trailing 14-0 with a little more than 10 minutes before the half, the Raiders were finally on the move and into WS territory with eyes on the end zone.

The drive took a setback when SAR was flagged for a block in the back, making it third and 15 from the WS 35. As a result, the Raiders had to settle for a 43-yard field goal attempt by Johnson, but the kick was blocked and the Hornets took over at their own 27. A promising drive had gone by the boards for SAR, but on the Hornets’ first play from scrimmage, the Raiders forced a fumble and recovered the ball at the Hornets’ 37-yard line. SAR had new life and a golden opportunity to put points on the board before the half was over.

The Raiders were able to do exactly that on their next play from scrimmage. On second and one from the WS 27, Ledger threw a pass into the end zone to a wide-open Cedric Smith for a 27-yard touchdown. Johnson’s extra point was good and SAR was back in the game, trailing 14-7 with 7:48 to play before halftime.

On the Hornets’ next possession, the SAR defense was able to force a third and nine situation from the WS 35, but an offside penalty against the Raiders gave the Hornets life. The Hornets were able to move the ball down into SAR territory and were poised to put themselves back up by double digits. After a timeout was called for a measurement on third down, the Hornets had the ball third and inches at the SAR 30. Then on the next play from scrimmage, Kirkley ran a quarterback keeper towards the Southland sidelines, then cut back up through the middle, broke tackles and scored a 30-yard rushing touchdown. The extra point was good and WS had a 21-7 lead.

The Raiders were unable to mount a drive on their next possession and were forced to punt the ball back to the Hornets with a little over three minutes left before halftime. Fortunately for SAR, the defense was able to stifle the WS offense and SAR would get the ball back with a little over a minute left before halftime to cut into the Hornets’ lead.

On second down and six from the SAR 32, Cedric Smith was able to break through the WS defensive line and scampered all the way down to the Hornets’ 25. This gave the Raiders a golden opportunity to put more points on the board before halftime.

A few plays later, the Raiders had the ball third and eight at the WS the 23, but Ledger’s pass into the end zone was dropped by Smith. However, the Hornets were flagged for a roughing the passer penalty, which gave the Raiders a first down at the WS 10.

On the next play from scrimmage, Ledger threw a short pass to Smith, who was tackled at the two-yard line. Then on second and goal from the two, Ledger scored on a quarterback keeper. Johnson’s extra point was good and SAR was back to within seven, trailing 21-14.

With 15.4 seconds left, the Raiders tried an onside kick, but the ball was recovered by the Hornets at their own 47 with seven 13.7 seconds left before halftime. However, WS was not able to score on its possession and both teams went into the locker room at halftime with WS leading the Raiders 21-14.

The Raiders got the ball to start the second half, but were not able to mount a drive and were forced to punt the ball away to the Hornets. On the first WS possession of the second half, WS fullback Cameron Kalmbach ran the ball for a big gain and Kirkley ran the ball on a quarterback keeper down to the SAR 25-yardline. After Kalmback gained another 14 yards on a carry to the SAR 11, Kirkley scored another touchdown on a quarterback keeper. The extra point was good and just like that, the Raiders found themselves down by double digits again, trailing 28-14 with 8:39 to go in the third quarter.

The Hornets tried an onside kick, but the Raiders were able to recover the ball near their own 40-yardline. SAR tried to mount another drive for points, but the WS defense stifled the Raiders’ attack. Instead of punting the ball away, SAR tried to go for it on fourth and three from their own 49, but they were not able to gain the necessary yardage. To make matters worse, an unsportsmanlike conduct penalty was called against the Raiders, which meant that the Hornets would have the ball at the SAR 28 and another chance to add to their lead. The Hornets were flagged for a holding penalty, but they nearly scored another touchdown when Kirkley threw a pass into the end zone that was dropped by the intended receiver. WS was not able to cash in on the SAR unsportsmanlike penalty and punted the ball away on fourth and 15. 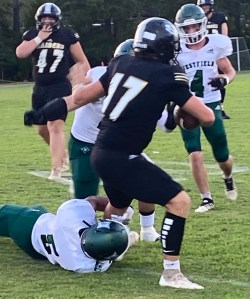 On the Raiders’ next possession, Ledger threw his second interception of the night as Brody McDaniel picked off the pass near midfield. Once again, the Hornets had excellent field position with a 28-14 lead. On third and one from the SAR 39, Kirkley ran the ball on a quarterback keeper down to the Raiders’ 12-yardline. A few plays later, Kirkley scored another touchdown on a quarterback keeper from four yards out. The extra point was good and WS owned a commanding 35-14 lead with 3:14 to go in the third quarter.

On the Raiders’ next possession, Ledger found Trey Sellers for a 23-yard reception at the SAR 43. A couple of plays later, Ledger threw another pass to Sellers, who was held by his defender. Defensive Pass Interference was called on the play and the Raiders had the ball inside WS territory with 2:35 to go in the third quarter.

After a timeout by SAR, Ledger found Cedric Smith for what would have been a big gain on the reception, but after Smith caught the pass, he fumbled the ball and it was recovered by the Hornets at their own 34-yardline.

The Hornets wasted no tine in taking advantage of the turnover, as Kirkley threw a short pass to Ryan Powers, who broke several tackles and scampered 68 yards for his second touchdown of the night. The extra point was good and the Hornets led 42-14 with 1:06 left in the third quarter.

With five minutes remaining in the game, the Raiders were able to move the ball into WS territory when the Hornets were flagged for pass interference on a pass from Ledger to Smith. However, the hope of the Raiders putting more points on the board was snuffed out when Ledger threw his third interception of the night and committed the Raiders’ fourth turnover of the game, as Trae Hardy intercepted the pass for WS. The Hornets took advantage once again as they moved the ball down to the SAR 12. Then on first and 10 from the 12, backup quarterback Connor Fitzpatrick ran the ball down near the goal line, but a holding penalty against the Hornets negated the play. Nevertheless, on second down and 21 from the SAR 25, Fitzpatrick scored on a quarterback keeper. The extra point was no good, but the Hornets had a 48-14 lead. 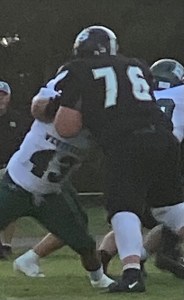 With about three minutes left in the game, the Raiders had the ball on offense, but were unable to mount a drive and turned the ball over on downs. On the Hornets’ final possession of the game, running back Nick Free ran the ball down inside the SAR 10-yardline before a referee standing near the end zone was injured on the play. The referee was taken to the hospital for further evaluation. At that point, the officials decided to stop the game right there and the Raiders suffered their first loss of the season; a 48-14 defeat at the hands of WS.

Ledger completed 11 of 24 passes for 92 yards and one touchdown pass along with three interceptions. He also ran for another touchdown on the night. Banks Simmons, who saw a brief amount of playing time at quarterback, completed both of his two passes for 13 yards.

Smith also had a strong performance for SAR as a wide receiver, catching six balls for 56 yards and hauling in one touchdown reception.