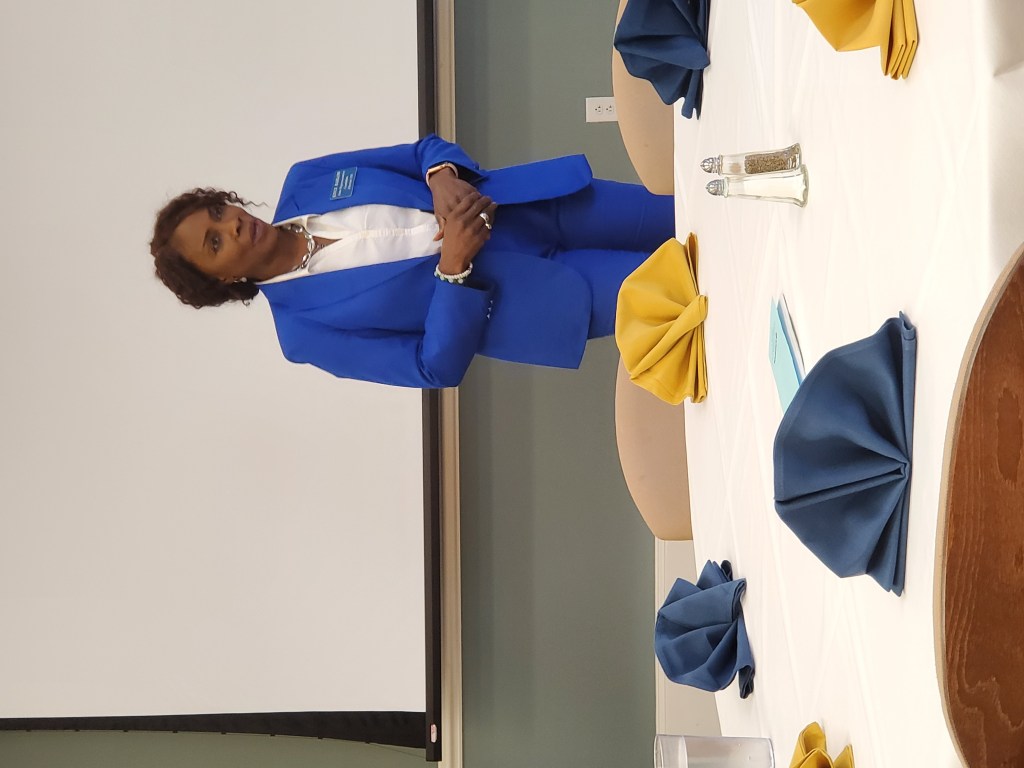 The Americus Kiwanis Club gathered together as they typically do on Friday, September 23, 2022, at Georgia Southwestern. The Kiwanis Club makes an effort to have public service candidates inform the club of their intentions and talents. Election day is November 8, 2022. Many a Sumter Countian will be casting a vote for their Georgia State House Representative. Part of the county is in a newly formed District 151. The District is composed of Chattahoochee, part of Doughtery, Marion, Schley, Stewart, part of Sumter, Terrell and Webster Counties. The districts were redrawn after the 2020 census was complete. Representative Mike Cheokas will face Joyce Barlow for the position.

Barlow and Cheokas were both invited to speak to the civic club. Rep. Cheokas had to regret the invitation due to other obligations but submitted a statement. Ms. Barlow was present and spoke to the crowd after lunch. On Barlow’s literature she highlights herself as a registered nurse, a small business owner and a community leader and advocate. Barlow lives in Albany, Georgia. In her words, “Our community deserves a leader who will stand up for quality health care, fully funded schools and public safety. Together we will strengthen our community and create a brighter, more prosperous future for all.”  She chose to speak on affordable housing, Medicaid expansion and education and her experience in these areas. She laid out the benefits of affordable housing to include the pride of home ownership. In regard to affordable housing, she mentioned “combining and connecting to those persons that can work and provide tax credits to help people who don’t have the money to afford to step out on their own. Its all about being able to give and share.”

As a healthcare worker, having received her vaccination, she went “neighbor to neighbor” to carry the message of immunization to those who were afraid. She reports being endorsed by “many, many entities.” She mentioned the “unions,” Georgia Educators association and Georgia Nursing Association. She reports, “I care about our educators” and reminded the club that we all “go through an educator at some point in our lives. We have to make sure our educators are taken care of.” Barlow has held a round table to hear from educators. She reports her take away from the meeting was educators wanted input into decisions being made. Barlow theorizes, “not having a voice,” and poor pay are some of the reasons educators are leaving the field. She offered a personal story of her third-grade teacher who figured out she needed glasses after her performance dropped when the questions were on the board. Her third-grade teacher not only identified the issue, but the teacher also paid for her appointment with the optometrist. “She opened up the whole world and told me I could do anything I want.” She also reports that the majority of the educators who she spoke with do not want to carry a weapon. “They want to make sure they are protected” and their school board is noticing their desires. She gives caution that as voters our community needs to be invested in who they elect to serve on the board of education. “If local citizens don’t hold the school board accountable for what you put them in office for, you are lacking in your responsibility.” She then made the tie between education and economic development. The school system is a primary force in either attracting or deflecting potential industry to our community. 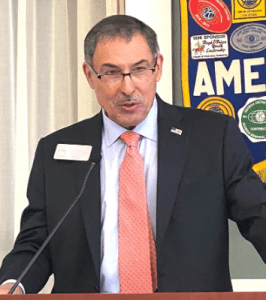 As a small business owner herself, she sees small business as the backbone of the community.  She reports Phoebe Putney decided to get into home health services because of her business success. She reports the trend in health care for those without insurance is having uninsured patients showing up at the emergency room when their health is “at critical levels.”  If a patient is unable to pay their bills, the cost will be shifted to the citizenry, and it may cost the hospital itself. She gave several examples of rural hospitals which have shut down over the years. She reports the state has six “hospital deserts.” She also linked the importance of having a robust offering of medical services as well as a hospital to our economic development. She reports that Medicaid expansion would help address some of these needs. She applauded Mercer University School of Medicine who incentivizes their graduates to work in rural areas. She also warned that if hospitals were closed, the tax base will decrease as hospital employees would move elsewhere.

Rep. Mike Cheokas submitted a statement for the club to consider. It was written by Sam Hunter, a past local bank president as well as campaign treasurer for Cheokas. Hunter is familiar with campaigns as he also served Jimmy Skipper and George Hooks in this role. Sam remarked on the distinction of their service to the State and recognized the same in Cheokas. He reminded the club that Cheokas has worked his way up to serve in leadership positions over the years. He is currently Chairman of the Small Business Committee, one of the largest committees in the House. House Leader Ralston also asked Cheokas to be the Chair of a study committee to determine what can be done to help in compensating local law enforcement officers. Cheokas has also served as an officer on the Higher Education Sub Committee of the House. Hunter remarked on the progress both Georgia Southwestern and South Georgia Technical College and collectively Sumter County have enjoyed as fruit of his work. Those projects alone represent $20 million, but Cheokas’ work is not limited to just those improvements. Hunter states, “Speaker Ralston trusts Mike Cheokas and will keep him in leadership positions. Regardless of political affiliation I am asking you to do what is best for all the people of House District 151. I am asking you to vote to keep Mike Cheokas as our voice in Atlanta.”

To speak with Rep. Mike Cheokas, you may contact him locally at 229.924.7823 or at his Atlanta office at 404.656.0298. To contact Joyce Barlow, please visit her website at joycebarlow.com. Election Day is November 8, 2022. Early voting is October 17, through November 4 at the Sumter County Fairgrounds located at 903 Adderton Street (HW 30) in Americus. Absentee Ballots will be received from October 7—November 8. For more information on Sumter County elections, please contact the Sumter County Elections Office at 229.928.4580 or visit the courthouse at 500 Lamar Street in Americus. Additional information can be found at sumtercountygaelections.us. To contact the Georgia Secretary of State directly, despite your county of residency, please visit mvp.sos.ga.gov. On this website you will be able to see a sample ballot, check your registration and polling location, request an absentee ballot or register to vote.