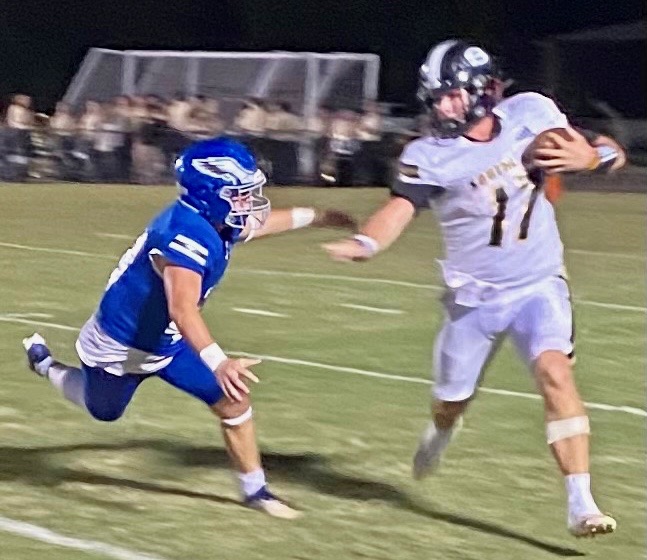 Southland Academy senior quarterback/defensive back Chase Ledger recovers the ball and runs back the other way after the Raiders blocked a TA field goal attempt just before halftime. Photo by Ken Gustafson

DAWSON, GA – Due to concerns over possible inclement weather from Hurricane Ian, the game between the Southland Academy Raiders (SAR) and the Terrell Academy Eagles (TA) was moved from Friday to Monday evening, October 3 for a rare high school version of “Monday Night Football”. However, this particular Monday evening will not be one that the Raiders will remember fondly, as the Eagles overwhelmed SAR on both sides of the ball. As a result, TA handed the Raiders a 42-6 loss and SAR was also dealt a devastating blow when Junior Defensive Lineman Derek Lane was severely injured while trying to make a touchdown-saving tackle in the third quarter.

“We’re banged up. We’re a bruised football team, but we’re going to go to work tomorrow and try to get better,” SAR Head Coach Rod Murray said. “That’s the nature of the business. We’ve got good football teams in our region and we’ve got to get better. That’s our responsibility.” 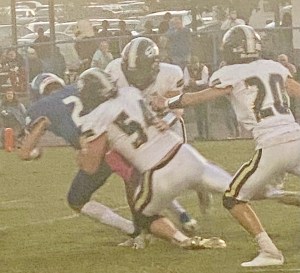 Southland Academy Junior Defensive Lineman Derrick Lane (#54) is seen here making a tackle. Lane suffered an injury in the second half while trying to make a touchdown-saving tackle.
Photo by Ken Gustafson

It was a difficult night for the Raiders on both sides of the ball. SAR Senior Quarterback Chase Ledger completed eight of 22 passes for 71 yards and threw two interceptions that were both taken back for touchdowns. On the ground, the Raiders rushed for a total of 117 yards on 23 carries, but were unable to mount any scoring drives until late in the game. SAR was also hurt by penalties. The Raiders committed nine penalties for 65 yards, while the Eagles were penalized just four times for 30 yards.

As far as the TA offense was concerned, quarterback William Massey completed 10 of 15 passes for 189 yards and a touchdown, while the Eagles’ ground game totaled 152 yards on 32 carries, resulting in three rushing touchdowns. 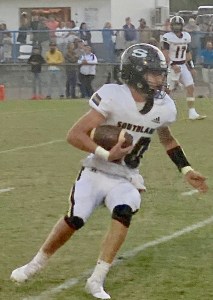 In spite of its struggles to stop the Eagles on offense, the SAR defense was able to force two turnovers on fumbles and the Raiders’ special teams came up with a blocked field goal just before halftime.

The Eagles thought they had a touchdown early in the first quarter when Massey connected with Jamison Lincey for a 36-yard touchdown pass. However, the play was called back due to a holding penalty against TA. Unfortunately for SAR, on the next play from scrimmage, the Eagles repeated that passing play and Massey found Lincey for a 39-yard touchdown pass. The extra point by Ryker Moye was good and TA led 7-0 with 8:54 to go in the first quarter. 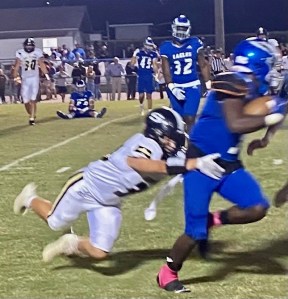 Throughout the first half, the Raiders struggled on offense, but the SAR Defense continued to try to limit TA’s offensive attack. However, the Eagles were able to mount another drive that resulted in a three-yard rushing touchdown by running back Marquerious Mitchell. Moye’s extra point was good and the Raiders trailed TA 14-0 with 3:09 to go in the first quarter.

Near the end of the first half, the Eagles mounted another drive deep into SAR territory and were poised to add to their lead, but the Raiders were able to force a fumble that was recovered by SAR Junior Defensive Back Trey Sellers. 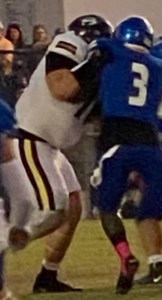 Unfortunately for SAR, the Raiders’ offense continued to struggle moving the football and with a little over a minute remaining in the half, the Eagles were able to mount another drive into SAR territory. However, the SAR defense was able to force a 45-yard field goal attempt from Moye that was blocked just before halftime.

Though the SAR offense struggled throughout the first half, the defense came up with some big plays to keep the Raiders in the game, as they trailed 14-0 at the half. 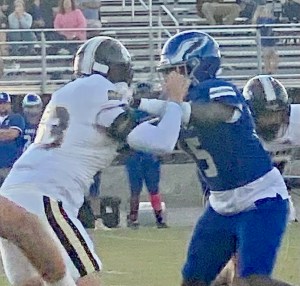 SAR received the ball to start the second half, but Ledger threw a pass that was intercepted by Dozier Swain, who promptly took the ball back 35 yards the other way for an Eagles touchdown.

On their next offensive possession, the Raiders tried to mount a drive, but were once again stymied by the TA defense and were forced to punt. On the Eagles’ next possession, they relied on the running attack of running back Mils Haynes, but they struck for another big play when Massey through a 44-yard pass to Quindon Wright at the SAR three-yard line. Then Mitchell scored his second touchdown of the night to give TA a 27-0 lead. However, things went from bad to worse for the Raiders on that play. As Mitchell was crossing the goal line, SAR Defensive Lineman Derek Lane tried to make a touchdown-saving tackle, but was severely injured on the play. The game had to be stopped for several minutes as the ambulance came to take Lane to a local hospital. Once play resumed, Moye kicked the extra point to give TA a 28-0 lead. 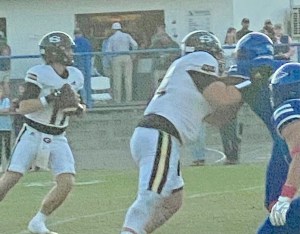 Southland Academy Senior Quarterback Chase Ledger is back to throw against Terrell Academy. Ledger completed eight of 22 passes for 71 yards and two interceptions against the Eagles.
Photo by Ken Gustafson

Things did not improve for the Raiders, as Ledger would later throw his second interception of the night to Mac Smurda, who ran the ball back for another TA touchdown. Moye’s extra point was good and SAR trailed 35-0 late in the third quarter.

The Raiders tried desperately to mount a scoring drive on their next possession, but were once again neutralized by the TA defense. On the Eagles’ next possession, they added to their lead when Mils Haynes scored a 51-yard rushing touchdown. Moye’s extra point was good and the Raiders found themselves trailing 42-0 with a little over 10 minutes still to play in the game.

In spite of the tremendously difficult circumstances with the score being what it was and the injury to Lane, SAR continued to fight. On their next possession, the Raiders were able to move the ball into TA territory. A few plays later, SAR got on the scoreboard when Mac McMichael scored on an end around. The extra point attempt failed, but the Raiders would not be shut out on this night. Nevertheless, SAR would leave Dawson with a 42-6 loss and is now 3-3 on the season, having lost two straight games.

The Raiders will be off this coming Friday, but will try to bounce back and end their two-game losing streak when they host Brookwood in their first GIAA Region 3-AAA game of the season. Kickoff is scheduled for 7:30 p.m.