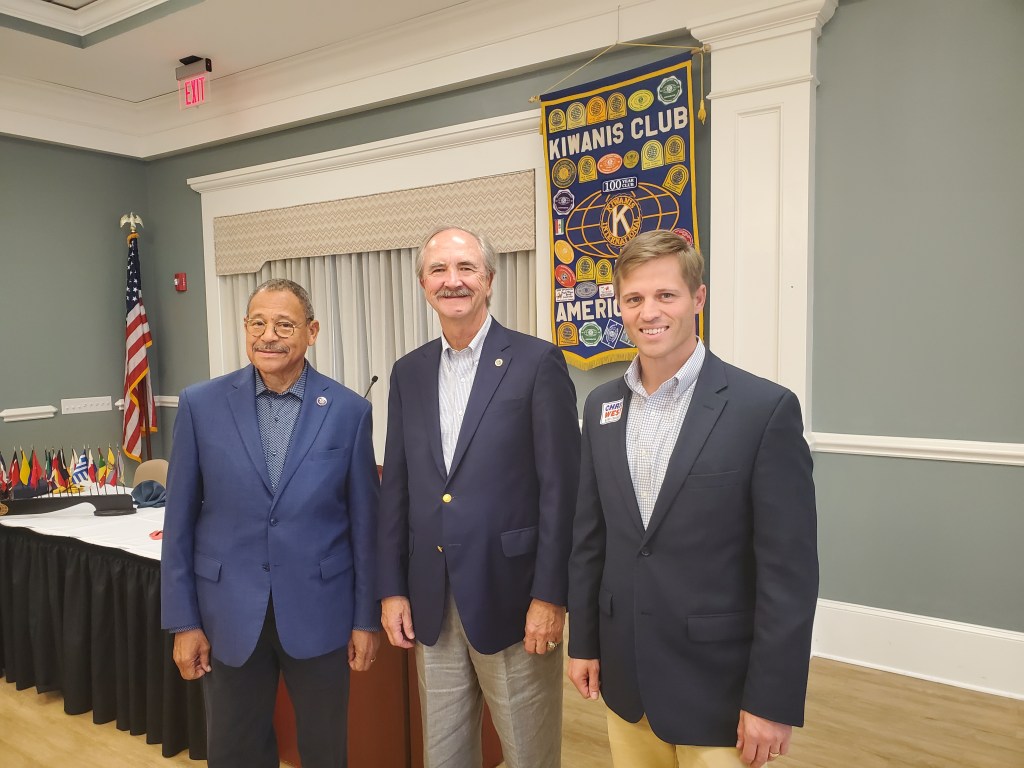 The Americus Kiwanis Club meets on Fridays at 1pm. As part of an ongoing intention to allow a voter an education on the candidates running for office, the club invited electoral candidates to serve as their program. Kiwanis has a long history of providing this for their members and guests, Both were in attendance for the latest forum.

Secondary to the 2020 census, the district has shifted its boundaries. A couple of new areas have been added to the district as the population shrunk over the past ten years. One of the new areas is Thomas County. Sanford Bishop is the democratic incumbent for the Second Congressional District of Georgia. Chris West is his republican opponent. The club established the format for the forum. In total, the candidates were given ten minutes to make their case for a vote.

Chris West took the floor first. Chris is a Thomasville resident and an attorney. He highlighted three areas he would like to see addressed in our district. They are opportunity, economic growth and energy independence. He mentions this race as being of national importance as it is a toss up race in the deep south. He sees this election as a “opportunity to move the district forward.” He told the club, while some are doing well, there are “a lot of people really hurting throughout this district.” He sees the district as being ripe to develop opportunity. He believes many people “are leaving and can’t come back because there is no real opportunity, and I want to change that.” He states he is best positioned to address this because, “I’m already proven in the private sector, you have a good track record to look at and there is a good example (in West). We just need to do it on a bigger scale.”

Chris brought up the 40-year high inflation rate and its impact on everyone who spends a dollar in this district. He mentions Build Back Better and the most recent inflation bill which comes out of the Biden White House as being poor policy. “President Obama’s top economic advisor said this it was probably not prudent to spend that much, that it is probably going to have an adverse effect of inflation. He was right, it did. I think we need to listen to the economist and stop the wasteful spending and get costs back down.”

West also sees energy dependence to be a vital step in moving the country forward. “Energy independence allows the gas prices to go back down.” He also mentions the use of natural gas and propane. West makes the connection between rising fuel costs and being dependent upon other countries to supply us in these areas. While a driver might feel the impact of rising gas prices when filling their personal tanks, it should be noted that any good which requires shipping will cost more due to the rising cost of fuel.

In closing, Chris states, “I wish I could tell you we are about to turn a corner….. unfortunately, because of these policies, that’s why we are headed in a wrong direction. We got to make a different turn in terms of policy to get going back in a right direction in terms of energy independence, economic growth and opportunity.” 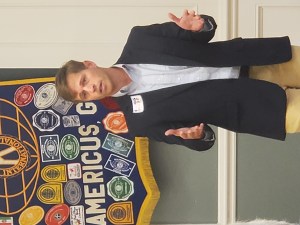 Sanford Bishop has been serving the district since 1992. He graduated from Emory School of Law and lives in Albany. He let the crowd know of his appointments while in congress. He serves on the appropriations and agricultural committees. Under the appropriations committee, he serves on three sub-committees. Of those three, he holds an executive position of chair and vice chair. Under the agricultural committee, he serves on two sub-committees. Each of the committees he is on allows jurisdiction over certain departments within the government. In addition to his committee obligations, he is also a member of several caucuses.

His service through committees allows him to work with our biggest economic producer—agriculture. He is also able to work with matters of defense and veterans. Additionally, he sees financial services being an emerging industry, and his placement in the committee positions him in a privileged place to influence these areas.

In closing, Sanford reminds the club “I have been here in good times and bad times—floods, tornadoes, hurricanes, pandemic—and I believe in good stewardship.” He then asked the club to “renew his contract” and made a point “that no on the job experience was needed—I have a proven record of working for you.”

There was additional time at the end of the two gentleman’s addresses. Chris opened the floor to questions. One member presented him with a theory he had become aware of in regard to inflation. He reports having been made aware there is an “increase in profits for corporations that produce products, profits have increased by over 50%–seems that might have a little to do with inflation. Folks making products are taking advantage of us and the situation after pandemic and increasing their profits and that doesn’t seem to be of concern.” Chris restated the theory for clarification, with the understanding being big cooperate companies are pocketing 50% profit increase. Chris would not endorse the truth of the theory. He stated if big cooperations were seeing such vast profits, their stakeholders would be as well. Many of those stakeholders do so through a 401k retirement plan. He said “most people I know—their 401k is getting crushed. We have the stock, if they were doing well, we would see profitable 401k’s if true.” Chris argued that the woes are likely due to the “regulatory environment.” He reports when companies are concerned about regulatory environments or economies, they take measure to protect themselves. We get runaway inflation because of price of goods and raw materials going up. We want an environment where companies are feeling good to spend or invest—they either let their stockholders invest (the profits) or invest in America.” Chris then spoke on the impact to the farmer, who in no way is seeing a profit of 50%, “they are getting crushed.” He reports “producers—in order to catch up next year” will have to consider a “40-50% food cost increase for them to remain viable. It’s policies, we got to shift policies to get going in a different route.” 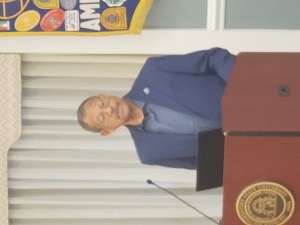 Sanford then took the floor to address the issue. Bishop “believes corporations are taking advantage of consumers due to supply shortage. We are facing inflation, but it is a global problem, it’s not just an American problem. It’s a global inflation problem driven be a global pandemic. The consequence is supply chains around the world are disrupted. Things we depend upon in the US come from overseas because of way our supply chains have developed over the past few years.” The congressman also mentioned the poor state of our infrastructure impacting supply chains as well. He reminded the audience that “the economy was shut down. We started to turn the corner with stimulus checks and people would go back to the stores to find the shelves empty.” Sanford stated the policies recently put into place, including an infrastructure bill help fix our supply chains. He cites, “the infrastructure bill was a way to do it—to lower costs to bring goods here.” He also added recent legislation allowed Medicare recipients to cap their prescription cost at $2,000 a year. Additionally, insulin was capped at $35 per month. He also mentions that several will see significant savings on their health plans, making the likelihood someone has to choose between food and medicine less likely. Bishop did cosign on the idea of price gouging and reports the inspector general will watch for such practices.

Sanford closed by stating, “We will turn economy back around, but we have a ways to go. It’s a global problem but America—because of policies we have put in place—we are cutting edge on tackling the worldwide inflation problem and we are at the forefront of the recovery of any other nation in the world.”

To learn more about Chris West, please visit his website at chriswestga.com. To learn more about Sanford Bishop, please visit his website at sanfordbishop.com. Early voting will continue until November 4 at the Americus-Sumter County Expo (old fairgrounds) at 903 Adderton Street (HW 30) from 8-5. Election day is November 8, and your vote may be cast at your regular polling place. However, if your home precinct is typically the Griffin Bell Golf and Conference Center on South Lee Street, you will be voting at the JROTC building on the campus of Americus Sumter County Highschool on Harrold Avenue. On election day, the polls will be opened from 7am-7pm. For further information please visit the Secretary of State website, or mvp.sos.ga.gov. You can see information specific to Sumter County at sumtercountygaelections.us.

A special appreciation is due the Kiwanians for their continued efforts to inform voters on legislative and electoral possibilities. As Herschel Smith reports, “This 2022 election cycle we invited and had several candidates attend from the US Senate race, US House race, Ga House race, and County Commissioner race.”