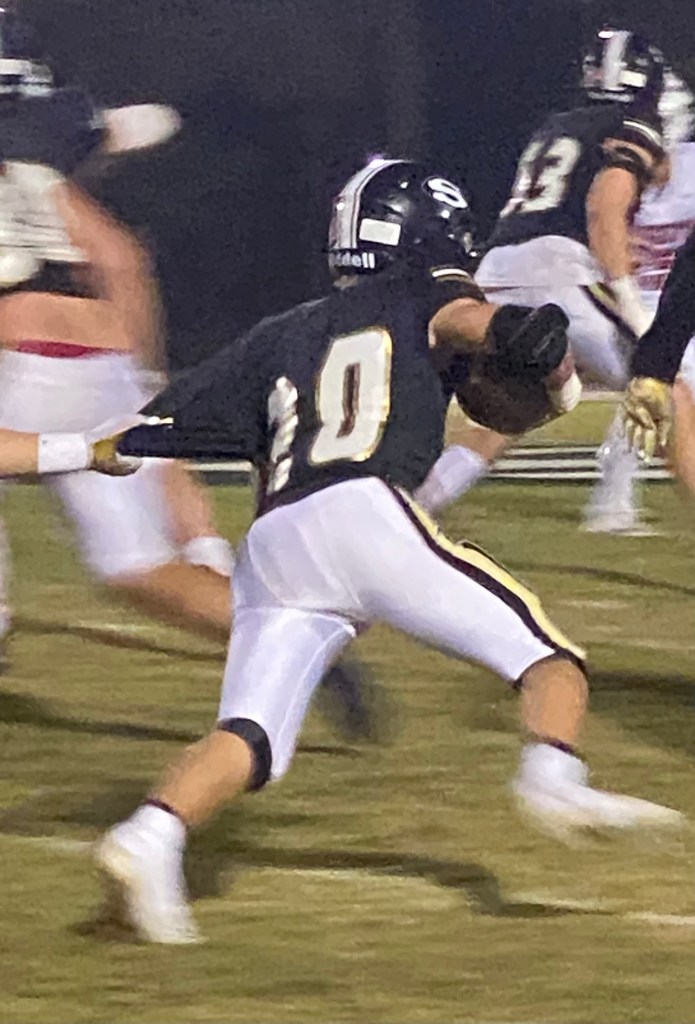 Southland Academy junior running back Fisher Britt rushed for 24 yards on six carries and scored a rushing touchdown in the Raiders’ 25-16 loss to Deerfield-Windsor. Photo by Ken Gustafson

AMERICUS – The Southland Academy Raiders (SAR) came into their regular season finale against their arch rival Deerfield-Windsor (DWS) Friday night with pretty much a do or die situation. They would need to defeat the Knights to ensure a spot in the GIAA Class AAA State Playoffs, or hope for some help. They were hosting DWS at Harvey Simpson Stadium on Senior Night and played in front of members from the SAR classes of 1990 and 1991. Considering this atmosphere and what was at stake, the Raiders competed as hard as they could to bring about a victory. However, they were unable to do so and fell to DWS 25-16, making their chances to make the state playoffs extremely slim.

According to SAR Head Coach Rod Murray, the Raiders will find out their fate as far as the playoffs are concerned on Saturday evening at around 8 p.m. According to Murray, Loganville Christian, out of GIAA District 4-AAA, needed to upset their District 4 opponent Lakeview Academy, along with the Raiders needing to beat the Knights. Lakeview Academy defeated LCA 52-34. 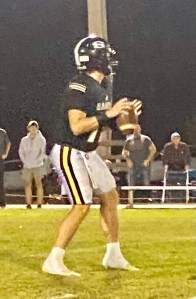 Southland Academy senior quarterback Chase Ledger completed seven of 12 passes for 141 yards and scored a touchdown on a quarterback keeper in the Raiders’ 25-16 loss to DWS.
Photo by Ken Gustafson

Regardless of what happens in regards to the playoffs, Murray was still extremely proud of the way his team competed against a quality opponent in DWS.

“Our kids played hard to give us a chance to get in there,” Murray said. “I’m proud of their effort and it was a heck of a football game down here.”

It was Senior Night at Southland Academy, and for 12 seniors, Friday’s game may very well have been their final football game in an SAR uniform.

SAR quarterback Chase Ledger completed seven of 12 passes for 141 yards and one touchdown and he scored another touchdown on a one-yard quarterback keeper. 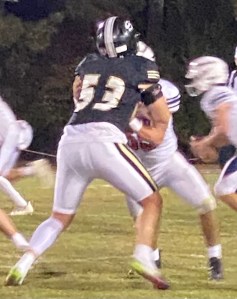 Much of the Raiders’ offense came from their ground game, as they rushed for a total of 143 yards on 46 carries. Trey Sellers led the SAR running attack with 98 yards on 19 carries and both Will Rhodes and Fisher Britt combined for 52 yards rushing on 13 carries.

The Knights got the ball first and were able to mount a drive into SAR territory before DWS quarterback Thomas Ray found Boles Middleton for a 12-yard touchdown pass. The extra point by Waylon Marbury was good and the Raiders trailed 7-0 with 9:36 to go in the first quarter.

However, SAR had a response and used the running attack of Fisher Britt and Will Rhodes, along with the running ability of Ledger, to mount a drive all the way down inside the DWS 20-yard line. Ledger would then gain yardage down to the seven- yard line on a quarterback keeper and would score a touchdown on another quarterback keeper two plays later. The extra point by Henry Johnson was good and the game was tied at 7-7 with 3:08 to go in the first quarter. 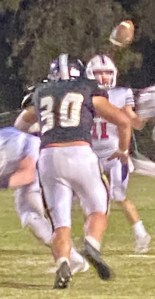 Southland Academy junior defensive end Will Godwin tries to fight his way to the DWS quarterback.
Photo by Ken Gustafson

The Knights responded with another scoring drive and it was the result of a long pass from Ray to Chewy Willis deep into SAR territory. A few plays later, the Knights were able to punch it into the end zone when Ray scored on a quarterback keeper from a yard out. Marbury’s extra point was good and DWS led 14-7 with 12:20 to go before halftime.

For the remainder of the second quarter, the Raiders struggled offensively and the Knights were able to move the ball across midfield and into SAR territory late in the first half. However, on third down, Luke Exley and Will Godwin teamed up to sack Ray and force the Knights into a fourth down situation. The Raiders got the ball back, but with 40.3 seconds left before halftime, they were unable to mount a scoring drive and went into halftime trailing 14-7.

The Raiders received the ball to start the second half and were able to move the ball down near the DWS 30-yard line thanks to a long quarterback keeper by Ledger. However, it was all for naught as the Raiders were flagged for a holding penalty. This resulted in a third down and 24 situation for SAR at its own 28. Ledger then threw a long pass that was intended for Henry Johnson, but the pass was incomplete and the Raiders were forced to punt on fourth down.

On the Knights’ next possession, they started at the SAR 39-yard line as the result of a good punt return. Then DWS running back Reid Martin ran the ball down to the SAR 18. A couple of plays later on third and seven from the SAR 14, Martin ran the ball for six yards, setting up a fourth and one situation. However, the Knights decided to kick a field goal and Marbury’s attempt was good, giving DWS a 17-7 lead with a little less than seven minutes left in the third quarter. At the time, this was a defensive win for the Raiders as they were still in the game with about a quarter and a half to go. 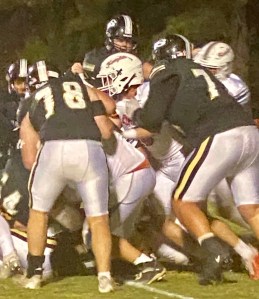 On the Raiders’ next possession, they were able to use their running attack to move the ball into DWS territory. Then on second and nine from the DWS 44, Ledger threw a pass to Will Godwin for a 15-yard gain to the Knights’ 29. SAR continued to use its running attack to force its way towards the DWS 20. After a timeout called by the Raiders, they faced a third and three situation from the Knights’ 23. They gave the ball to Trey Sellers, who gained two yards on the play, but on fourth and one from the Knights’ 21, a false start penalty was called against the Raiders and SAR was forced to try a 42-yard field goal. Unfortunately for the Raiders, Henry Johnson’s field goal attempt was no good and the Knights took over on downs with a 17-7 lead at the end of the third quarter. That false start penalty proved to be a critical mistake for SAR and a pivotal point in the game. The Raiders were not able to score a touchdown on that drive and missed out on points altogether on Johnson’s missed field goal.

As the fourth quarter began, DWS had the ball at its own 20-yard line. However, the Raiders forced a fumble and recovered the ball at the DWS 20, giving themselves a golden opportunity to cut into their 10-point deficit. However, the DWS defense stifled SAR’s offense as Ledger was sacked for a loss on third down. After a timeout taken by SAR, the Raiders decided to have Ledger try a 28-yard field goal, which he made with 9:56 to go in the game. They weren’t able to take advantage of the turnover with a touchdown, but the Raiders were within one score, trailing 17-10.

The Knights had the ball deep in their own territory on their next possession and the SAR defense was poised to force a three and out, but on third and nine from the DWS 16, Reid Martin was able to run for the necessary yardage to keep the Knights’ drive alive.

DWS continued to use its running attack to gain yardage and bleed time off the clock. However, a 15-yard chop block penalty was called against the Knights, giving the SAR defense another chance to get a stop. Then on the next play from scrimmage, the Knights tried a halfback running pass, but Martin’s pass was intercepted by Sellers and the Raiders had another opportunity to mount a scoring drive. On third and five, Sellers was able to gain four yards, but on fourth and one from the DWS 45, Sellers’ attempt for a first down fell inches short and the ball went over to the Knights on downs.

The SAR defense tried to hold DWS on its next possession, but on third and six from the SAR 30, DWS running back Ben Everett broke through the SAR defense and scampered 30 yards for a touchdown. To make matters worse for the Raiders, on the Knights’ extra point try, there was a bad snap and the ball was thrown into the end zone, where a DWS receiver caught it for two points. Just like that, the Knights had a 25-10 lead with a little over three minutes left to play.

On the Raiders’ next possession, they converted on fourth and 23 when Ledger’s pass was caught by Godwin between two defenders. With 1:10 remaining, this gave SAR a faint hope of a miracle comeback.

On the very next play, Ledger was sacked, but would manage to connect with a wide-open Fisher Britt for a 44-yard touchdown pass thanks to a blown coverage by the DWS secondary. The Raiders tried to go for two, but the attempt failed and SAR trailed 25-16 with 14.3 seconds left.

SAR tried an on-side kick, but the Knights recovered and would go on to win by the score of 25-16.