A reception will follow at the Historic Inn’s commons area. Homemade refreshments and coffee will be served. The public is invited to the ceremony and the opportunity to see the inn decorated in its Christmas best. Other shops on Main Street will be open. Special thanks goes to Ellen Harris at the Inn for allowing the use of that facility.

The collage will be placed on permanent display at Plains City Hall. The Trust extends special appreciation to Plains Mayor Boze Godwin and City Council members for their approval of the project.

Allie Murray Smith (1905-2000), mother of former first lady Rosalynn Carter, served the Plains Post Office for nearly three decades. Her work there as well as her work throughout Georgia and her notoriety around the world as the mother of a U.S. first lady helped lead to her induction into the 2021 Georgia Women of Achievement Hall of Fame. Mrs. Smith was publicly honored, as were only a three other Georgians of noted significance for 2021, at a ceremony at Wesleyan College in Macon earlier this year.

Friends and relatives of Allie Smith, including her two daughters Rosalynn Carter and Allethea Wall, were present for that presentation. Plains Historical Preservation Trust President Steve Short accepted a silver plate from the GWOA engraved with Mrs. Smith’s name and year of induction.

The Trust board will use the opportunity on Dec. 11 to unveil the plate and photos as a permanent reminder of the works of Mrs. Smith for her service to the community, including at Plains United Methodist Church and beyond. Mrs. Smith was a stalwart at the Plains Post Office for 29 years.

The Trust thanks community members for their help with the project, and encourages the public to see the display soon. 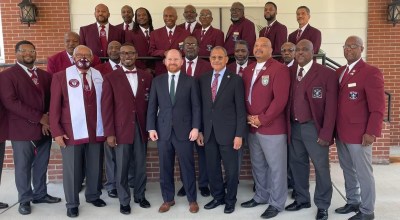