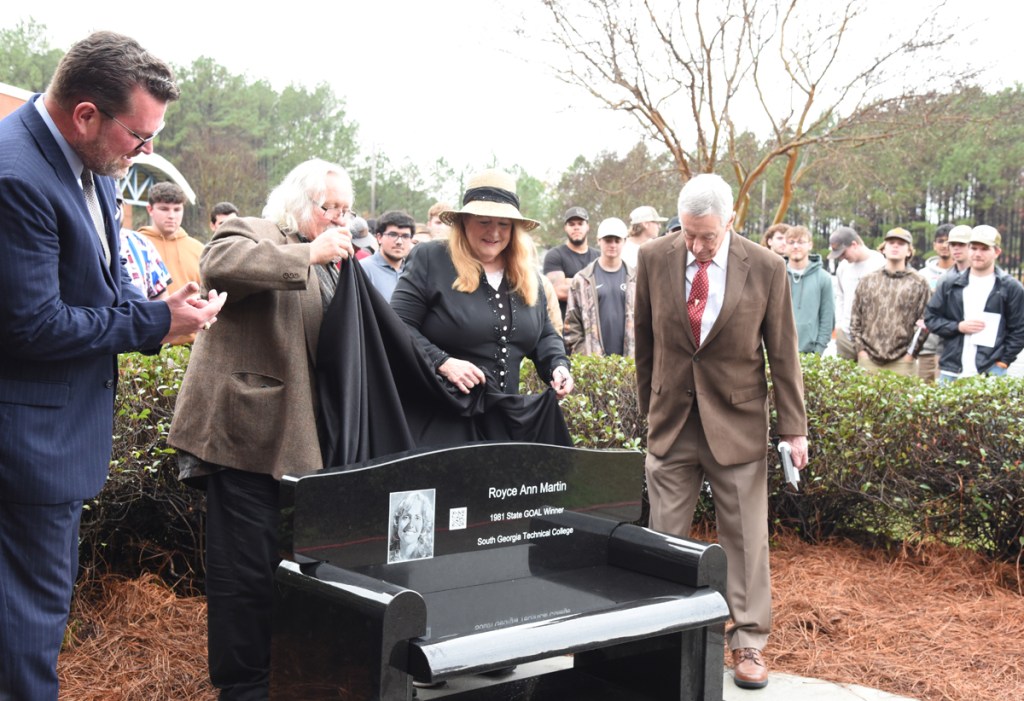 South Georgia Technical College President Dr. John Watford is shown above with Phil Martin, Royce Ann Martin and retired Aviation Maintenance Instructor Frank Gassett as they uncover the black marble bench placed in her honor outside of the Griffin Bell Aerospace Center on the SGTC campus. Photo by SGTC

Royce Ann Martin was an aviation maintenance technology student at South Georgia Tech and was selected to serve as the 1981 GOAL winner at the local level.  She won the regional level competition and advanced to the state level, where she was selected as the top technical college student in Georgia in 1981.  She and her husband, Phil, along with her retired aviation maintenance instructor Frank Gassett and his wife, Nyoka, were on hand at the unveiling. 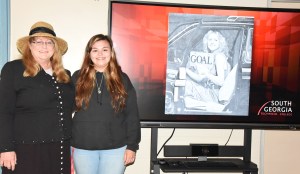 The Georgia Occupational Award of Leadership (GOAL) was established in 1972 to showcase the state’s technical education programs and their students.  South Georgia Tech has had three state GOAL winners.  Royce Ann Martin, an aviation maintenance technology student, was SGTC’s first state winner in 1981.  Johnny Dodson, Industrial Systems student, represented SGTC as a state winner in 1996 and Ashley Rogers, a marketing student, won the state title in 2016.

All of the state GOAL winners were recognized recently by the Technical College System of Georgia during its 50th anniversary celebration.  Royce Ann Martin, Ph.D., is a retired Aviation Studies Instructor from Bowling Green State University.

“As a student in South Georgia Technical College’s two-year Aviation Maintenance Program, I was fortunate enough to be the recipient of both the state’s GOAL Award and the state’s PRIDE (Performance Recognition Indicating Demonstrated Excellence) Award in 1981.  The benefits from being a state GOAL winner and student in South Georgia Tech’s vocational-technical courses had a tremendous impact on my life,” shared Martin when she spoke with the SGTC Aviation Maintenance Instructors and students at the unveiling ceremony.

South Georgia Technical College Vice President of Institutional Advancement and Executive Director of the SGTC Foundation, Su Ann Bird, welcomed Royce Ann Martin and her husband, Phil, along with retired aviation maintenance instructor Frank Gassett, and his wife, Nyoka, to the program which featured members of the SGTC faculty and staff and the aviation maintenance students.

“Royce Ann and her husband, Phil, donated a black marble bench that has been placed outside the student entrance of this building in the hopes that it will inspire and remind other students about the outstanding opportunities that South Georgia Tech provides,” said Bird.  “It has a photo of Royce Ann as a student and a QR code that will direct students to the SGTC GOAL page on our website.”

Bird challenged students as they pass by the bench each day on the way to and from class to take a moment to reflect on the proud history of the aviation program and the college as well as the promising future for generations to come. 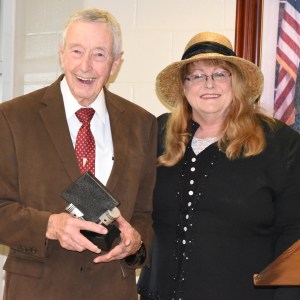 SGTC Retired Aviation Maintenance Technology instructor Frank Gassett (left) is surprised when Royce Ann Martin, SGT’s first state GOAL winner, (r) presents him with a long overdue Instructor of the Year award for his mentoring and instruction from 1982, during the bench unveiling ceremony.
Photo by SGTC

After those brief comments, Royce Ann Martin, shared with the students and faculty that her time at South Georgia Tech had been life altering.  Prior to enrolling in the SGTC aviation maintenance technology program, she had worked as a military aircraft maintenance officer.  She was involved in a severe accident and due to serious head trauma and other debilitating injuries, she was given a medical discharge from the military that left her devasted.

With encouragement from her husband, Phil, she enrolled in the FAA certified aviation maintenance program at South Georgia Tech.  She developed an affinity for the hands-on approach to learning from her vocational-technical education experience.

Frank Gassett, Martin’s Aviation Maintenance Instructor, inspired and influenced her to become an educator and mentor.  After graduation and earning her FAA Airframe and Power Plant Certifications, Martin continued her education and earned a master’s degree while also serving as a civilian ground instructor for Grumman Aircraft.  She later earned her Ph.D., and taught classes at Indiana State University for five years.

She retired from the College of Technology at Bowling Green State University in Bowling Green, Ohio in 2018 after teaching aviation courses there for 22 years.  “My teaching always reflected my belief that theory should be intricately connected to application,” said Martin.

During her talk, Martin took the opportunity to present Frank Gassett with an Instructor of the Year trophy.  “Mr. Gassett was my instructor but he was out on medical leave when I won the state GOAL award, so my substitute teacher, Frankie Williams, received the recognition.  I wanted to surprise Mr. Gassett today and thank him for his support with this trophy,” said Martin.

Prior to the unveiling of the marble bench in front of the Griffin B. Bell Aerospace Center, SGTC Executive Foundation Director Su Ann Bird, revealed that current aviation maintenance student, Morgan Harnage, had been selected to receive the Royce Ann Martin Aviation Maintenance Technology Scholarship.