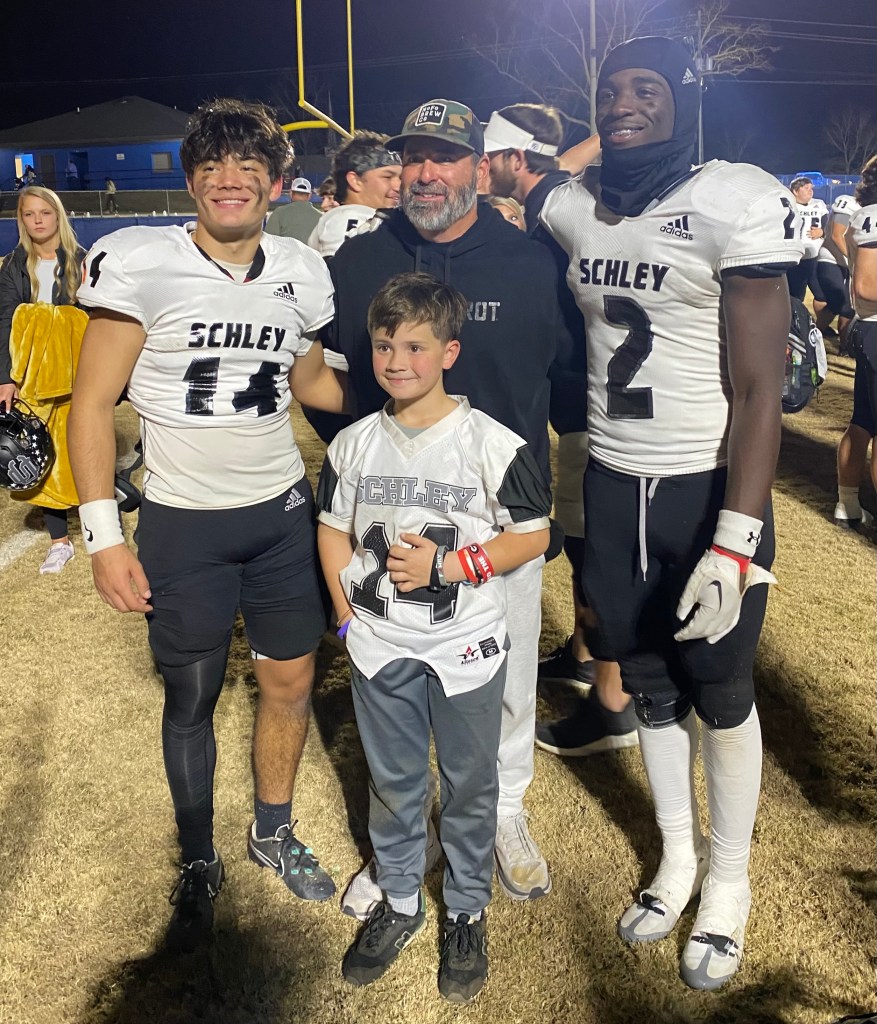 WRIGHTSVILLE, GA – Going into Schley County’s state semifinal playoff game against the undefeated Trojans of Johnson County (JCHS), the alma mata of Herschel Walker, it was thought by some that the Wildcats would have their hands full trying to stop the running attack of JCHS senior running back Germivy Tucker, who recently broke Walker’s all time rushing record. However, with the exception of one long run for a touchdown by Tucker late in the fourth quarter, the Wildcat defense stifled him and the rest of the Trojans’ offense all night, which is what they have been doing to their opponents all year. At the same time, the SCHS offense was unstoppable in this game, as it has been for most of the year. Those two factors: the smothering and impregnable Wildcat defense, coupled with the unstoppable speed, skill and athleticism of the SCHS offense, led to the Wildcats’ 35-6 drubbing of JCHS at Lovett Stadium and Herschel Walker Field on Friday, December 2. More importantly, however, as a result of the victory, the Wildcats (12-2) are headed to Atlanta, where they will take on the 13-1 Bowdon Red Devils for the GHSA Class A Division 2 state championship.

With the loss, the Trojans finish their season at 13-1.

While some might have wondered whether or not the Wildcats had what it takes to make it this far, head coach Darren Alford is not the least surprised that his club is in a position to bring Schley County High School its first ever state title in football. 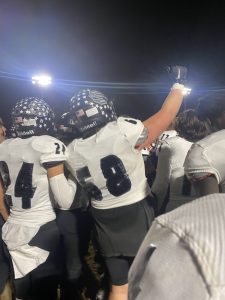 “We knew coming into the year that we had one of the better teams in the state,” Alford said. “We knew that we had to get into the weight room and do the things that we needed to do and the kids have been resilient all year long. They came out. Every workout, they were here. They were in the weight room during summer workouts, all the camps that we did. A lot of work has gone into this. I expect us to be in this place and I expect us to go on and finish this thing. I’m very thankful to God. I’m so thankful that He called me to do this and do it here with these kids. Without Him, I would be nothing. This team would be nothing and we’re just thankful for that,” Alford continued.

SCHS junior quarterback Jay Kanazawa had another solid game for the Wildcats. The junior signal caller completed 17 of 23 passes for 338 yards and three touchdowns. Kanazawa also rushed for 31 yards on six carries, including gaining several yards on a quarterback keeper on fourth down that led to a first and goal for the Wildcats at the JCHS two-yard line. His play in this game, along with the play of his Wildcat teammates, has them one win away from a state title. 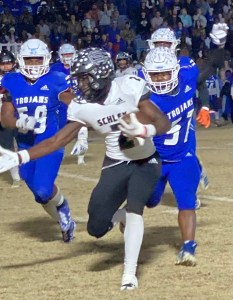 SCHS junior wide receiver JaLewis Solomon certainly did his part to ensure that the Wildcats have a berth in the state title game. Solomon caught 10 passes for 224 yards and scored two touchdowns, including the first touchdown at the beginning of the game, which ended up being a tone setter for the rest of the evening.

“This is a very exciting moment for us,” Solomon said. “We’ve never made it this far. Thursday, we’ve got to go out and compete and get this ring.”

“It’s unbelievable. The feeling is unreal,” Westbrook said. “Words can’t explain what I am feeling right now. It’s what we’ve worked for all year and it’s all gone into this and the next game,” Westbrook continued. 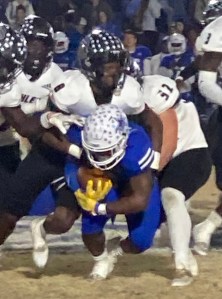 While Kanazawa and his wide receivers did their job, those who bolstered the Wildcats’ running game cannot be left out. Senior running back Malachi Banks rushed for 72 yards on 15 carries and scored a touchdown, while sophomore running back Zayden Walker also scored a rushing touchdown.

Many of these players also got the job done on the defensive side of the ball, so much so that the SCHS defense was able to shut down the highest scoring offense in GHSA Class A Division 2. Senior outside linebacker Luke Forehand led the Wildcats in tackles with eight and junior middle linebacker Jack Clark had six tackles on the night. Both senior free safety Clinton Jackson and junior outside linebacker Ethan Sellers each had five tackles and both junior defensive tackle Trenton Stubbs and junior free safety Kabreon Aldridge each had four tackles on the night. Stubbs also had one sack for an eight-yard loss. 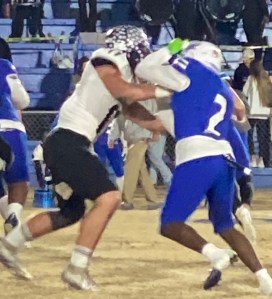 Schley County senior outside linebacker Luke Forehand tries to force his way past a JCHS blocker. Forehand led the Wildcats with eight tackles in their win over Johnson County.
Photo by Ken Gustafson

The Wildcats were able to force two turnovers in the game, as Solomon came up with an interception and Luke Forehand had a fumble recovery.

The Trojans won the toss, but elected to defer until the second half. This ended up being a crucial decision because it gave the Wildcats the opportunity to set the tone of the contest early, which they did. On the first play from scrimmage near the SCHS 40, Kanazawa threw a short pass into the flat to Solomon, who promptly rumbled all the way for a Wildcats touchdown. The extra point by Miguel Yanez-Rueda was good and SCHS had an early 7-0 lead.

On the Trojans’ first possession, they were able to move the ball into the Wildcats’ territory, but the SCHS defense forced a fumble and Luke Forehand recovered the ball for the Wildcats. 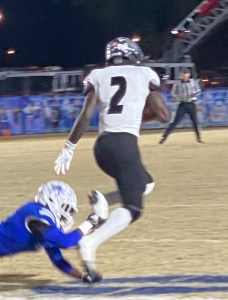 Schley County junior WR JaLewis Solomon is seen here breaking a tackle and scoring the first touchdown of the game in the Wildcats’ 35-6 win at Johnson County.

This enabled the SCHS offense to go to work once again. Thanks to a couple of plays, including a long pass from Kanazawa to Westbrook into JCHS territory, the Wildcats eventually moved the ball down to the Trojans’ 11-yard line. A few plays later on third and goal from the JCHS one-yard line. Zayden Walker scored a one-yard rushing touchdown. The extra point by Yanez-Rueda was good and the Wildcats were off to a dream start, leading 14-0.

Near the end of the first quarter, the SCHS defense forced the Trojans to punt on fourth down, but the punter dropped the snap and was tackled by Clinton Jackson around the JCHS 40-yard line. This gave the Wildcats excellent field position to start the second quarter and they made the most of it by mounting another scoring drive that was capped off with a short touchdown pass from Kanazawa to Solomon. Yanez-Rueda’s extra point was good and the Wildcats would end up going into halftime with a 21-0 lead against the 13-0 Trojans.

The Trojans got the ball to start the second half, but the Wildcat defense stifled their offense once again, forcing a three and out. 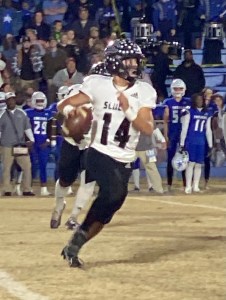 The SCHS offense simply picked up where it left off by moving the football into JCHS territory. Then on second down from the Trojans’ 40, Kanazawa threw a short pass to Malachi Banks on the right side of the field and Banks did the rest, weaving his way past tacklers all the way for a touchdown. The PAT by Yanez-Rueda was good and the Wildcats were firmly in command with a 28-0 lead over Herschel Walker’s alma mata.

Once again, the SCHS defense neutralized the Trojans on offense and got the ball back for the SCHS offense. The Wildcats responded once again with yet another scoring drive. Kanazawa was able to make a huge play when he found Solomon for a reception at the JCHS 21 and a fresh set of downs. The very next play, Kanazawa found Solomon again for a 19-yard reception at the Trojans’ two-yard line. A couple of plays later, Malachi Banks scored a rushing touchdown, leaping over the JCHS defensive line and into the end zone. The PAT by Yanez-Rueda was good and the Wildcats extended their lead to 35-0 with still one more quarter to play.

The Trojans were able to move the ball into SCHS territory on their next possession, but quarterback Dalton Brantley‘s pass was intercepted by Solomon near the goal line, snuffing out the Trojans’ hopes for points on that drive. 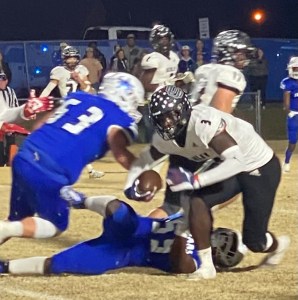 Early in the fourth quarter, the Wildcats were poised to put more points on the board and were able to move the ball down near the JCHS five-yard line. However, on the next play, SCHS fumbled the ball and it was recovered by JCHS.

A few plays later, JCHS senior running back Germivy Tucker finally showed why he broke Herschel Walker’s all time rushing record. Tucker ran the ball towards the JCHS sideline and used his speed to scamper down the sideline for the Trojans’ first and only touchdown of the game.

Nevertheless, the contest had long been decided before that point as the Wildcats would go on to salt away their 35-6 victory and a berth in the GHSA Class A Division 2 state title game against Bowdon at Georgia State Stadium in Atlanta on Thursday, December 8. Bowdon defeated Lincoln County 45-28 in the other state semifinal. Kickoff for Thursday’s state championship game is scheduled for 5 p.m.