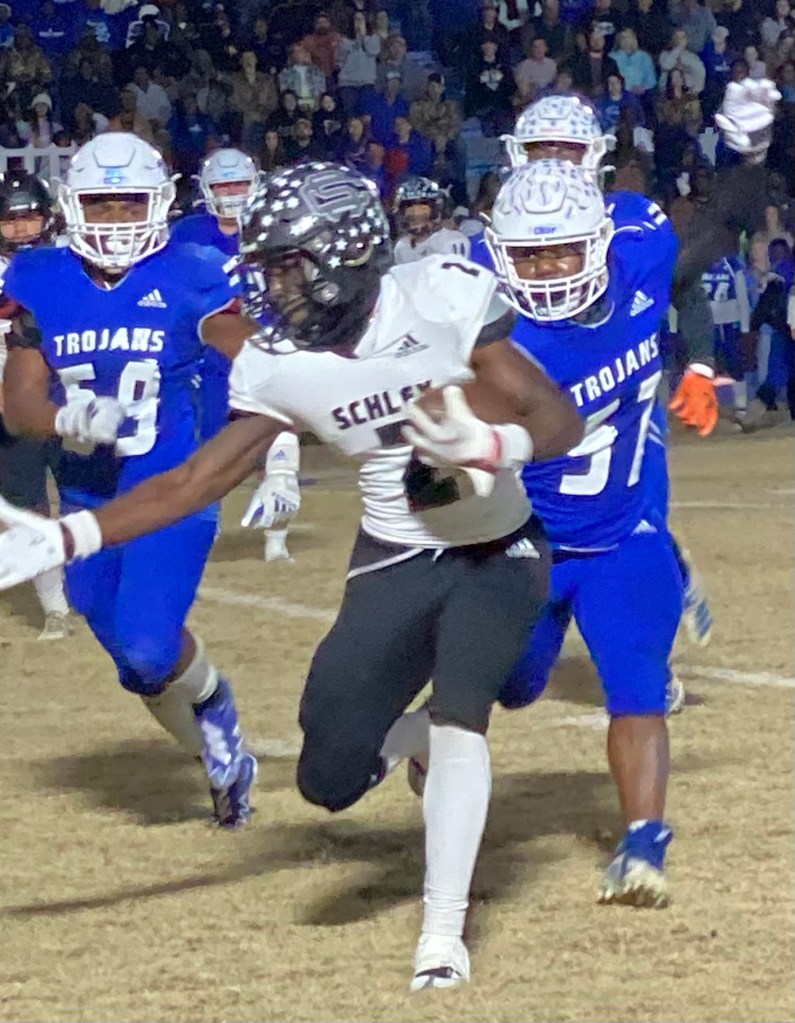 Schley County junior WR/CB JaLewis Solomon has caught 77 passes for 1,100 yards and 10 touchdown receptions on the year for the Wildcats. Solomon also has three interceptions on the year as a cornerback, including one against Johnson County last Friday in the state semifinals. ATR Archive

ELLAVILLE – The 12-2 Schley County Wildcats (SCHS) must conquer one more hurdle in order to realize their dream of hoisting the state championship hardware in Atlanta on Thursday, December 8. That final hurdle will present itself in the form of the 13-1 Bowdon Red Devils (BHS).

The Red Devils punched their ticket to the GHSA Class A Division 2 state title game against the Wildcats by defeating Lincoln County 45-28 in the semifinals last Friday.

With their resounding 35-6 victory over Johnson County, the highest scoring team in the state in the Class A Division 2 level, the Wildcats are more than capable of cooling off the BHS Red Devils and bringing home a football state championship to Ellaville. As far as common opponents are concerned, BHS defeated Manchester 29-14 and 42-21, while the Wildcats dominated the Blue Devils 28-6. The Wildcats lost a close affair to Early County 19-17 early in the season, while the Red Devils took out ECH 36-26 in the state quarterfinals. Both teams also faced Tattnall Square Academy this season. The Wildcats defeated TSA 28-21, while the Red Devils overwhelmed the Trojans 55-27.

Nevertheless, margin of victory or defeat against common opponents doesn’t necessarily indicate the potential outcome of a game between two powerhouse programs in a state title game. The game isn’t played on paper. It’s played on the field. SCHS definitely has the firepower to get it done, but the Wildcats will have to be just as efficient on both sides of the ball as they were last Friday in Wrightsville.
The Red Devils should pose a formidable threat, especially in their running game. Senior running back T.J. Harvison and senior quarterback Robert McNeal have combined to rush for 2,784 yards on 321 carries and have combined to score a total of 34 touchdowns. Junior running back Jordan Beasley is also a threat in the BHS backfield, as he has rushed for 356 yards on 67 carries and scored 15 touchdowns.

While most of their offense comes from the running game, McNeal is capable of causing problems in the air. The BHS senior signal caller has completed 64 of 110 passes for 1,233 yards and has thrown 11 touchdown passes for the Red Devils.

“They (BHS) are excellent running the football, #11 (McNeal), and #2 (Harvison) make up most of their ground attack,” SCHS Head Coach Darren Alford said. “They also throw it well when they need to. We have to stop their run and be able to adjust to what they give us on defense when we have the football.” 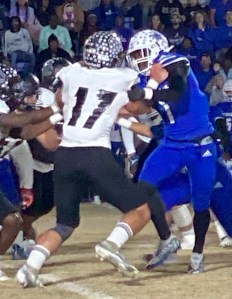 Schley County senior OLB Luke Forehand (17) has a total of 86 total tackles on the season for the Wildcats and leads them in sacks with seven.
ATR Archive

While these are impressive stats from the Red Devils, the SCHS defense has already proven that it can neutralize, if not totally shut down, high-powered offenses as it did to RB Germivy Tucker and Johnson County last Friday. In that game, the Wildcats limited the high-scoring Trojans to just 246 total yards, while the Wildcats’ offense posted 475 total yards.

If SCHS junior QB Jay Kanazawa, junior WR JaLewis Solomon and running backs Zayden Walker (Soph.) and Malachi Banks (Sr.), along with the rest of the Wildcat offense continue to operate at peak efficiency like they’ve been doing, SCHS has an excellent chance of bringing home the state championship hardware if the defense continues its great work, which it has been doing all season. Junior free safety Kabreon Aldridge and senior OLB Luke Forehand lead the Wildcats in total tackles with 88 and 86 respectively. Forehand is having an outstanding senior year in the sack category, as he leads the Wildcats with seven sacks. 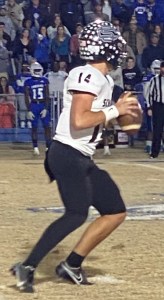 Schley County Junior QB Jay Kanazawa has completed 192 of 303 passes for 3,024 yards and 33 touchdowns for the Wildcats in 2022.
ATR Archive

To sum it up, if the Wildcat defense continues its great play and the offense continues to be efficient, there is no reason why SCHS cannot be the team hoisting the state championship trophy Thursday night at Georgia State Stadium. Kickoff is scheduled for Thursday, December 8 at 5 p.m.