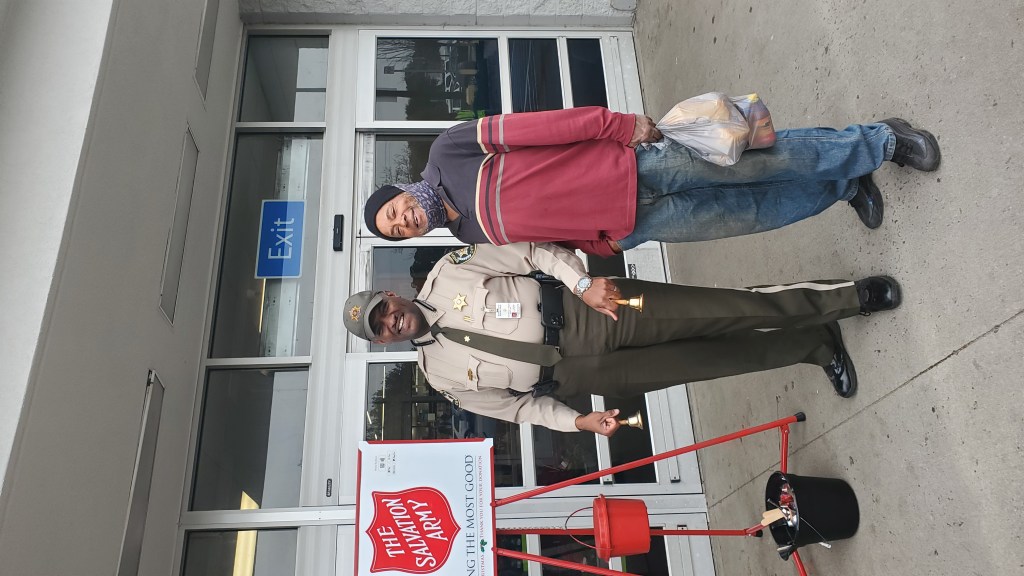 Sheriff Eric Bryant ringing the bells while chatting it up with friend, David Burnett (AKA Junkyard Dave).

We expect it when we go shopping during this season. The singing of bells can be heard before we even see the ringer in many cases. But what is it about? What happens to all those loose coins and silent dollars after they hit the kettle? How did the ringer even come to be ringing?

Most of us know the name Salvation Army, but what do we know outside of the name, the bells and the kettle? The mission of the organization is, “The Salvation Army, an international movement, is an evangelical part of the universal Christian Church. Its message is based on the Bible. Its ministry is motivated by the love of God. Its mission is to preach the gospel of Jesus Christ and to meet human needs in His name without discrimination.”

Its roots? It began in England in 1852 when William Booth decided to take the love of Christ from inside the church to the people outside. He spoke with the “poor, homeless, hungry and destitute.” The approach was met with some disdain, so William and his wife, Catherine, decided to train evangelists throughout England. Under the name, “Christian Mission” they grew to 1000 strong by 1865. The Salvation Army website states, “Thieves, prostitutes, gamblers, and drunkards were among their first converts to Christianity. And soon, those converts were also preaching and singing in the streets as living testimonies to the power of God.” Soon “the group converts became soldiers of Christ and were known then, as now, as Salvationists. They launched an offensive throughout the British Isles that, in spite of violence and persecution, converted 250,000 Christians between 1881 and 1885. Their message spread rapidly, gaining a foothold in America and soon after Canada, Australia, France, Switzerland, India, South Africa, Iceland, and Germany. Today, The Salvation Army is active in virtually every corner of the world and serves in 131 countries, offering the message of God’s healing and hope to all those in need.”

So why do we see them around the holidays most prominently? Because this is the time to ring the bell. “Sharing is Caring is a long-standing motto that succinctly describes the partnership between The Salvation Army and the community.” In 1891, Captain Joseph McFee, a Salvation Army officer who was looking for a way to cover the cost of the community Christmas meal. “Recalling his days as a sailor in Liverpool, England, he recreated the “Simpson’s Pot”, an iron pot where charitable donations were placed by passersby. Captain McFee placed a similar pot at the Oakland Ferry Landing, at the foot of Market Street where it could be seen by all those going to and from the ferry boats. By 1895 the ‘kettle’ was used by 30 locations along the west coast and by 1897 the campaign was making its mark in east. That year, the kettle effort in Boston and other locations nationwide resulted in 150,000 Christmas dinners for the needy. The tradition continues still today. Sharing your donation at Christmastime helps The Salvation Army care for homeless and needy families, but also helps serve 30 million people through a myriad of other services all year long.”

The bell ringers come from a myriad of sources and yes, you can participate as well. On some days you will see a small-town famous ringer as was sighted on Monday, December 5, 2022. Sheriff Eric Bryant was taking his turn as part of the tradition. He was crafty enough to have a bell in each hand. It is tough to walk by the Sheriff without making eye contact. Eric knows everybody, and he is quick to offer an encouraging word to those who pass by, whether they have something to offer the kettle or not. The Sheriff isn’t above putting a lollypop in your hand just because you are you. Where that lollypop came from being both his hands were full of bells is super mysterious, but Christmas tends to favor mystery.  You don’t have to have a familiar face or have your name on a ballot to ring the bell. You just have to have some hint of a hope our home will want to show the love of Jesus to a neighbor. And yes, the local gatherings go to local folks. Again, as the website states, “The donations we collect during the holiday season not only help us provide gifts to children who would otherwise go without, but they also help us provide food, shelter, and utility assistance to those who need it most every day of the year. Every dollar dropped into a red kettle helps give local families the Christmases they deserve and the yearlong support they so desperately need.”

But the Salvation Army is not only strong in the holiday season. Their mission to show the love of Christ goes on long beyond December 25th. You might remember there is an opportunity to pick a child’s name off an Angel Tree around Christmas as well. But did you know the Salvation Army regularly helps with utility assistance, food pantries, rent/mortgage assistance and homeless shelters? They even can be seen after disasters offering relief. And don’t forget there are some “Family Stores” around as well. Gently used items can be dropped off at these locations so another can use or simply find treasure in something you no longer want.

Want to ring too? You can volunteer for one hour or a whole day. If it is difficult for you to stand then you may bring a chair. To volunteer, you may e-mail Wayne Gosa at manwiththewrench1986@gmail.com or you may call Misty Belcher at 229 924 5154. If you would like to make a contribution to the kettle program you can send a check to the Americus Salvation Army at 204 Prince Street Americus, Georgia 31709, attention Misty Belcher.

To learn more about the Salvation Army, please visit their website at salvationarmyus.org. The hours for our local “Family Store” are Monday through Saturday 9-5. The store is located on North Prince Street for any donations or for a quick shop. They also have a Facebook page. Not one to ring a bell? There are plenty of other opportunities for you to join the efforts. You can find those on the website as well. There is more to the Salvation Army than just spare change and gifts around the holidays!