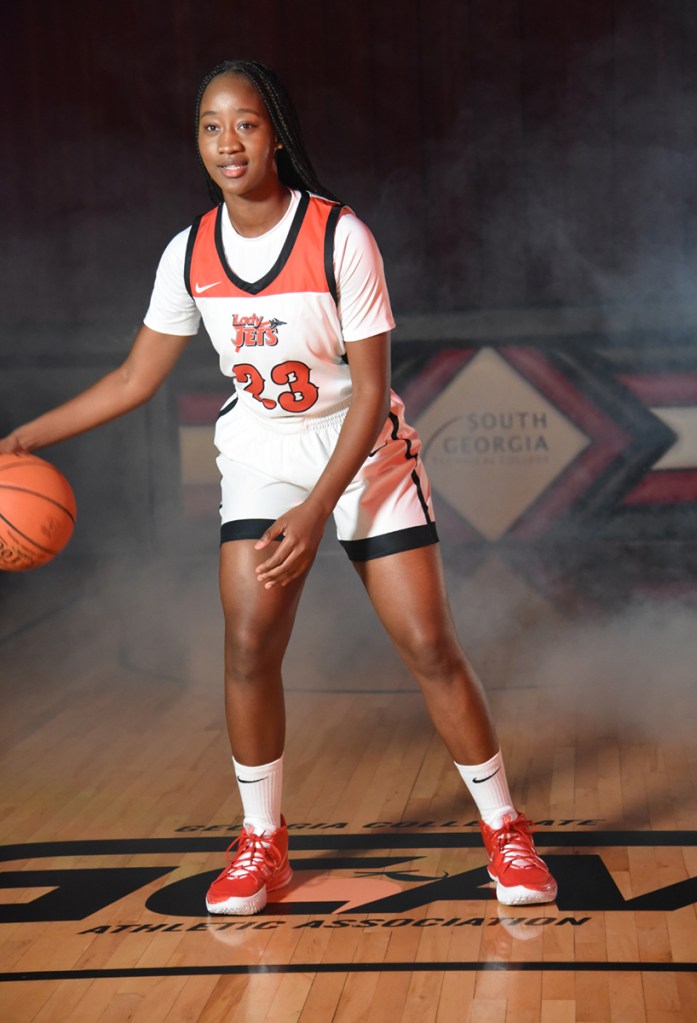 SGTC’s Fanta Gassama (#23) led the Lady Jets in scoring with 24 points. She also had 15 rebounds on the night. Photo by SGTC Athletics

This was the Lady Jets 10th consecutive win this season and it put them at 10 – 1 overall.  They are also tied for first place in the Georgia Collegiate Athletic Association (GCAA) conference with a 3 – 0 record.  East Georgia State College is also 3 – 0 and 7 – 1 overall.

Chattahoochee Valley outscored SGTC 21 – 20 in the third quarter to pull within one point going into the final quarter.  A fourth quarter rally by SGTC propelled the Lady Jets to the 71 – 63 victory.

Three members of the Lady Jets scored in double digits and sophomore center Fanta Gassama led the team in scoring with 24 points and had a double-double night with 15 rebounds.  She also had three assists, a steal and a blocked shot.

Sophomore guard Luana Leite tossed in 19 points for the Lady Jets and also secured seven rebounds, two assists and two steals.  She made five three point shots in eight attempts. The other Lady Jet to break into double figures was sophomore forward Alexia Dizeko with 18 points, eight rebounds, three assists, a steal and a blocked shot.

Rounding out the scoring for the Lady Jets was Da’Nae Williams with five points.  She was one of one from the three-point line.  Laurie Calixte and Mame Thiaw both tossed in two points and Susana Yepes closed out the scoring with one point on the night.

The Lady Jets will have back-to-back games at home this weekend against GCAA opponents.  They will host East Georgia State College at 5:30 p.m. on Friday, December 9th in the Hangar.  SGTC and East Georgia are currently tied for first place in the conference.  Then they will take on Albany Technical College at 1 p.m. on Saturday, December 10th.  Albany Tech is also undefeated in the conference with a 2 – 0 record.  They are 6 – 4 overall.