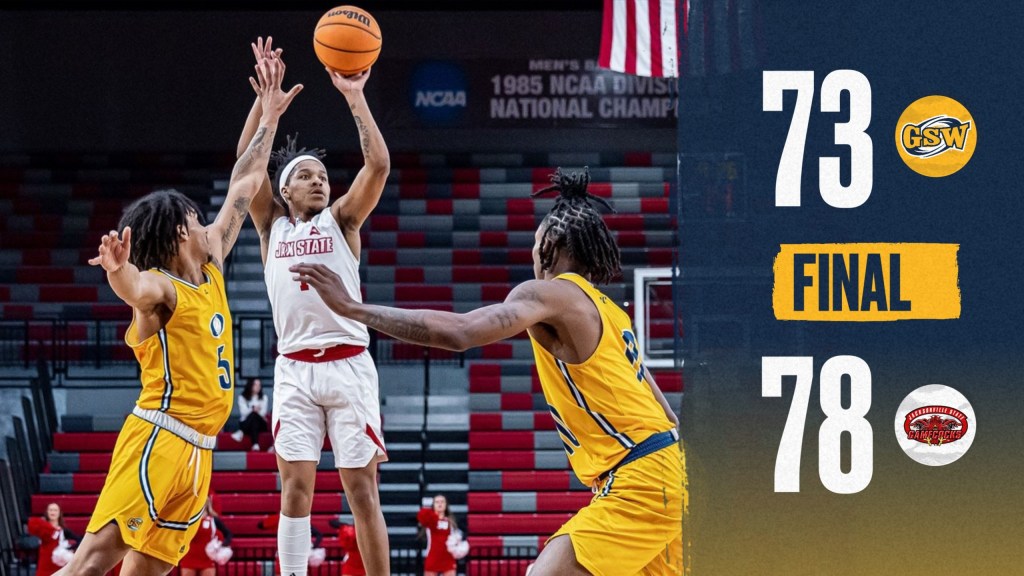 JACKSONVILLE, AL – With 1:19 to go in the Hurricanes’ game against NCAA Division 1 opponent Jacksonville St. (JSU), Georgia Southwestern State University (GSW) sophomore guard Lars Nilsen drilled a jumper to give the Hurricanes a 73-71 lead. GSW, an NCAA Division 2 program, was a little over a minute away from pulling off a rare upset victory over a D1 program. However, JSU’s Demaree King drained a three-pointer with 1:04 to play. That three-pointer, coupled with a steal by the Gamecocks’ Skyelar Potter, led to a 7-0 run by JSU to close out the game. The Hurricanes were oh so close to experiencing rarified air, but instead fell to the Gamecocks 78-73 on Tuesday, December 27.

The loss puts the Hurricanes at 5-4 on the season and they are 0-2 in the Peach Belt Conference (PBC). With the win, JSU improves to 7-6 overall on the season with Atlantic Sun Conference play still to come.

Nilsen led GSW in scoring with 17 points and junior forward Jerroda Briscoe poured in 11. Both junior guard Phillip Burwell and sophomore guard Jarrett Adderton were also in double figures with 10 points each.

The Hurricanes got off to an excellent start in the first half by jumping out to an 18-10 lead. However, over the next several minutes, the Gamecocks went on a 15-7 run and tied the game at 25-25 on a basket from Clarence Jackson with 4:36 to go in the first half.

During the first three minutes of the second half, both teams traded baskets, but the Hurricanes maintained a 40-36 lead. However, the Gamecocks went on a 6-0 run before Burwell tied the game at 42-42 on a layup with 15:57 to go.

Over the next two minutes, it was a back-and-forth affair between both teams, but JSU would take a 50-47 lead at the 12:49 mark on a three-pointer by Demaree King.

About a minute later, the Gamecocks went up 57-50 on a three-pointer from Skyelar Potter, but the Hurricanes continued to keep their deficit under 10 points over the next several minutes and would eventually tie the game at 71-71 on a layup by Adderton with 2:39 to go.

Then with 1:19 to go, Nilsen gave the Hurricanes their last lead of the game at 73-71 on a jumper, but King would respond for the Gamecocks shortly thereafter on a three-pointer to permanently give JSU the lead.

The Hurricanes tried to regain the lead on their next possession, but Potter came up with a steal for the Gamecocks and GSW had to foul King with 15 seconds to go. King made both foul shots to make it 76-73 JSU, but the Hurricanes still had time for a tying three-pointer.

However, the Gamecocks forced another turnover when Juwan Perdue came up with a steal with nine seconds left, forcing the Hurricanes to have to foul again with six seconds on the clock and prompting GSW Head Coach Aaron Coombs to call a timeout. Skyelar Potter made both free throws for the Gamecocks and JSU would go on to defeat GSW 78-73.

King led JSU with 30 points and Potter poured in 15 for the Gamecocks in the winning cause.

The Hurricanes will try to rebound from this loss when they host Middle Georgia State in the Storm Dome on Friday, December 30 at 7:30 p.m.