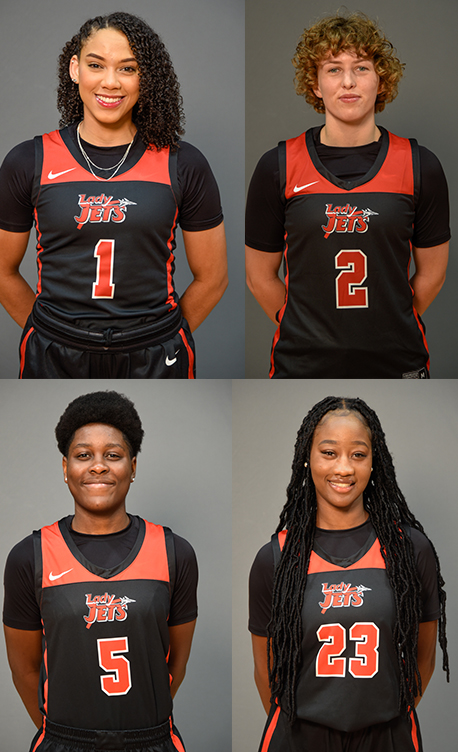 Shown above are the four Lady Jets that are listed nationally for their individual accomplishments this season. Shown on the top row are: Lady Jets Luanna Leite, 1, and Loes Rozing, 2, On the bottom row are Alexia Dizeko, 5, and Fanta Gassama, 23. Photo by SGTC Athletics

The Lady Jets are 17 – 1 overall after overpowering the 12th ranked Pensacola Lady Pirates last week as well as Tallahassee State College and Chattahoochee Valley Community College in the 10-team Lady Jets Holiday Classic which featured five top 25 teams in the nation.  SGTC moved up two spots after an upset win by Shelton State over the top-ranked Eastern Florida Titans.  The Lady Jets only loss this season was to the Gulf Coast State College Lady Commodores in their season opener.

Gulf Coast moved into first place in the national rankings with a 15 – 0 record after Eastern Florida’s loss.  South Georgia Tech went to second place followed by Trinity Valley who is now third with a 14 – 1 record.  Northwest Florida State moved to fourth and Blinn is now ranked #5.  Eastern Florida State dropped to sixth, followed by Southern Idaho, McLennan, Collin County and Eastern Arizona to round out the top 10 spots.

South Georgia Technical College Athletic Director and Lady Jets head coach James Frey is pleased with the rankings.  “I am pleased that the NJCAA rankings are reflecting the amount of work our young ladies are putting in.  Everyone sees the games but nobody sees the practice, individual workouts, extra shots, weight training, and community service time these young ladies put in.  All of those things collectively have put us in the position we are in now.”

Frey also pointed out that the Lady Jets have eight returners that were a part of 27 wins last year and a sweet 16 appearance in the NJCAA National Tournament.  “These eight returners have been through a lot and gained valuable experience.  All of them stayed summer semester and worked really hard with the exception of Loes Rozing, who was playing for her national team.  I knew this group had a very high ceiling.  Now, it’s about the work.  We have to continue to put in to get better every day.

“As quickly as all this came in, it can go away, without humility and work,” explained Coach Frey.  “We will just keep taking it one game at a time and see where it all leads.”

In addition to its second place ranking in the national poll, the SGTC Lady Jets also had four players to be recognized for their individual efforts on the court.   The four Lady Jets featured in the national rankings include: sophomore center Fanta Gassama, sophomore Loes Rozing, sophomore Alexia Dizeko, and sophomore Luana Leite.

Lady Jets sophomore guard Alexia Dizeko, 5’ 11” from Sion, Switzerland, is currently 8th in free throw percentage shooting making 78% of her shots from the foul line and 8th in the nation in total points scored with 274.

Sophomore guard Luana Leite, 5’ 7” from Sao Paolo, Brazil, and sophomore point guard Loes Rozing, 5’ 10” from Heiloo, Netherlands, were both ranked nationally as well. Leite was 16th in three-point percentage shooting.   She is hitting 46.8 of her three-point attempts.  Rozing is ranked 30th in assists per game averaging 4.6.

The Lady Jets will play at home on Saturday, January 7th in a conference double-header with the Jets.  The Lady Jets play Georgia Highlands at 1 p.m. Saturday, and then the Jets have their first conference game at 3 p.m. against East Georgia State College.