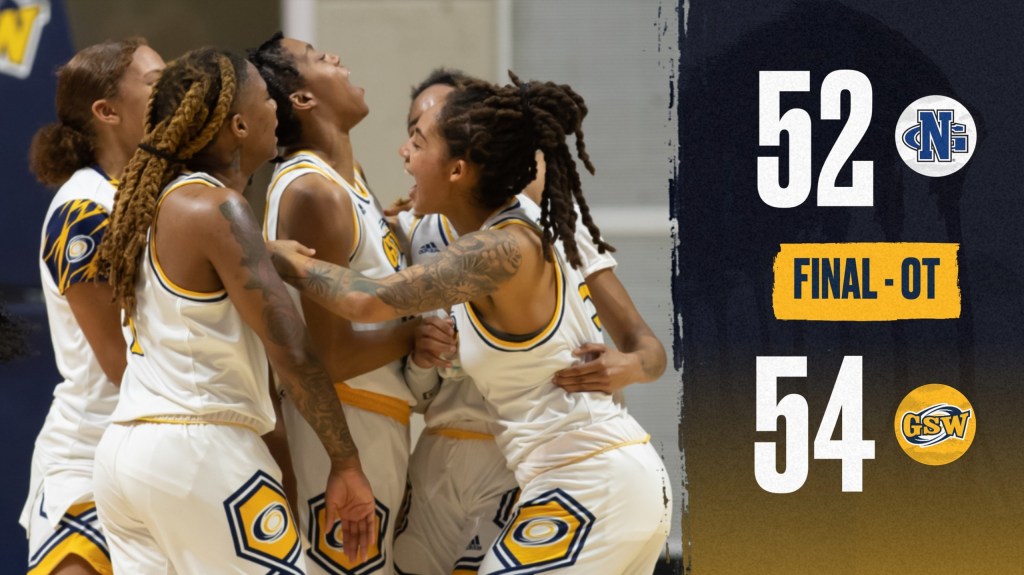 AMERICUS – It took an extra five minutes to decide the outcome, but the Georgia Southwestern Lady Hurricanes (GSW) came up with just enough plays in the extra session to earn a hard-fought 54-52 overtime victory over the 15th ranked Lady Nighthawks of the University of North Georgia (UNG) in Peach Belt Conference action at the Storm Dome on Wednesday evening, January 4.

The Lady Hurricanes have now won eight straight games and are 11-1 on the season and undefeated in the PBC at 3-0.

Three GSW players scored in double figures. Senior guard Ava Jones led GSW in scoring with 15 points and both senior guard Jacquelyn Levay and junior forward Kayla Langley each poured in 12 points in the winning cause.

UNG had the lead in the first half up until the 9:02 mark when Jones scored on a layup to tie the contest at 10-10. Both teams then went through a scoring drought over the next three and a half minutes until Jones gave the Lady Hurricanes their first lead of the game at 12-10.

For the remainder of the half, GSW maintained the lead and went into the locker room at halftime with a 19-16 lead.

UNG then took its first lead of the ball game on two made free throws from Lutz, but Levay was fouled in the act of shooting with 2:43 to go and made both foul shots to tie the game at 43-43.

With 1:50 to go, Massop regained the lead for the Lady Nighthawks on a layup, but GSW tied the game on a basket from Kayla Langley, who scored on a layup off an assist from Destiny Garrett with 1:21 to go.

Then with 40 seconds to go in regulation, the Lady Hurricanes regained a 47-45 lead on a layup from Ava Jones, after which GSW called a 30 second timeout.

With 12 seconds to go in regulation, the Lady Hurricanes had a chance to most likely salt away the victory when Lex Chatman went to the foul line to shoot two free throws, but she could only make one of the two foul shots to give GSW a 48-45 lead.

That one missed foul shot proved to be costly at the time, as UNG’s Josie Ernhardt made a three-pointer off the glass to tie the game at 48-48. The Lady Hurricanes had one last chance to win the game in regulation, but Jolicia Williams’ desperation three-point attempt at the buzzer fell short and the contest would have to be decided in a five-minute overtime period.

With 57 seconds to go, the Lady Hurricanes forced a turnover on a steal by Levay and Jones was fouled shortly thereafter. However, Jones only made one foul shot, giving the Lady Nighthawks the opportunity to take the lead.

However, GSW was able to get the ball back and got an insurance free throw from Jones with 53 seconds left. UNG tried to tie the game on its next possession, but turned the ball over with 37 seconds left, prompting GSW Head Coach Justin Payne to call a 30 second timeout.

Out of the timeout, the Lady Nighthawks forced a turnover on a steal by Massop with 36 seconds left and it gave UNG a golden opportunity to tie the game and possibly send the contest into another overtime. Caroline Martin’s attempt to tie the game with 15 seconds left was missed, but the Lady Nighthawks were able to grab an offensive rebound and Massop was fouled by Kayla Langley, giving her an opportunity to tie the game with two foul shots. However, Massop missed both free throws and the Lady Hurricanes were able to survive with a 54-52 overtime victory.

Kayla Massop, Caroline Martin and Niyah Lutz each led UNG in scoring with 14 points and Kaylee Sticker chipped in six in the losing cause.

The Lady Hurricanes (11-1, 3-0 PBC) will try to increase their winning streak to nine games when they travel to Milledgeville, GA on Saturday, January 7, to take on the Lady Bobcats of Georgia College. Tip off is scheduled for 1:30 p.m.