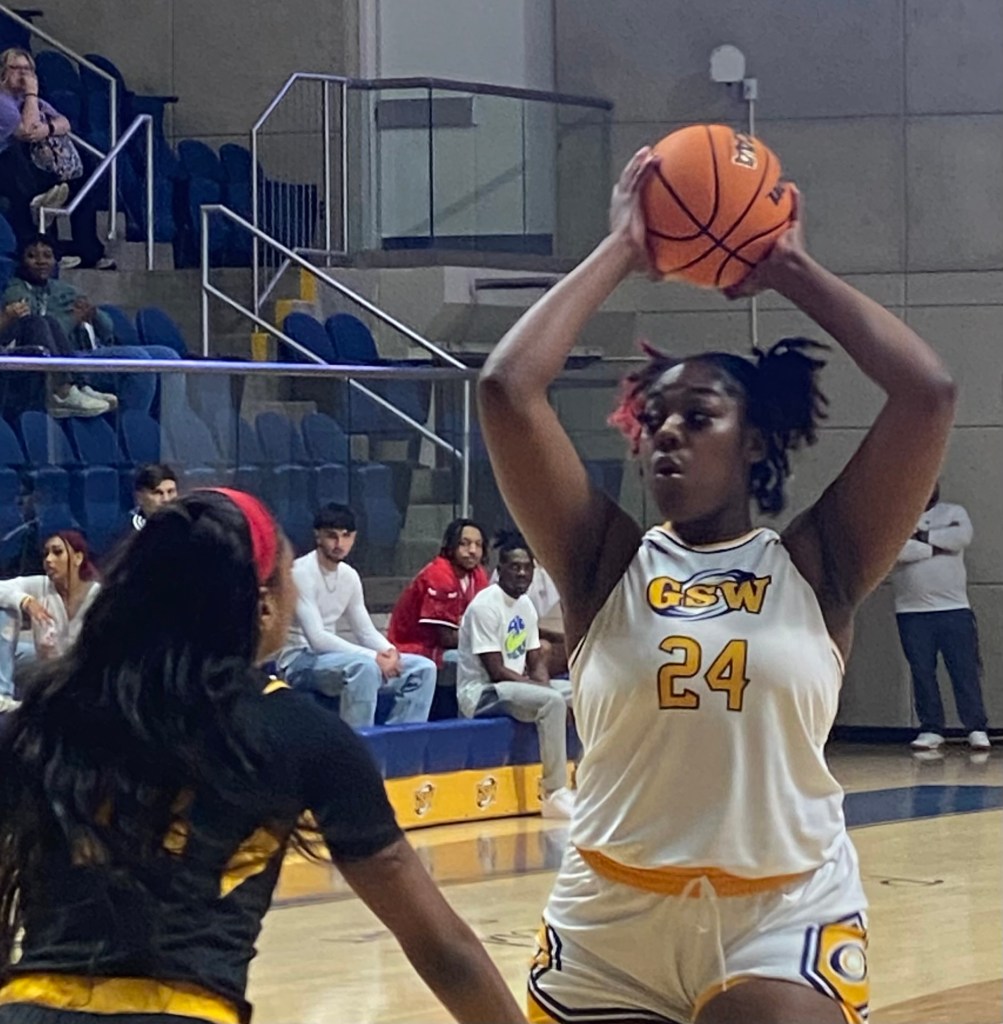 GSW junior forward Kayla Langley led the Lady Hurricanes in scoring with 18 points in their 67-52 victory over Flagler College. Photo by Ken Gustafson

AMERICUS – The 11th ranked Georgia Southwestern State University Lady Hurricanes (GSW) came into their Peach Belt Conference (PBC) matchup against Flagler College at the Storm Dome Wednesday night with hopes of storming their way to their 10th straight victory against the Lady Saints. Thanks to a 7-0 run by GSW late in the first half and a 6-2 run early in the third quarter, the Lady Hurricanes were able to do just that. They took control of the game on both ends of the floor in the second half and went on to defeat FC 67-52 to improve to 13-1 overall and 5-0 in the PBC.

Kayla Langley led the Lady Hurricanes in scoring with 18 points and Jolicia Williams was also in double figures with 17. Jacquelyn Levay almost posted a double double for GSW, as she scored nine points and hauled down 10 rebounds in the contest.

There were three categories that the Lady Hurricanes dominated in and their success in those categories played a key role in their victory. Those categories were points off turnovers, points in the paint and points from the bench. 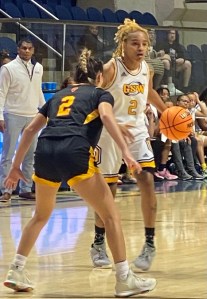 In addition to winning those battles, GSW connected on 5 of 17 three-pointers (29.4 percent) and went to the foul line 18 times, making 12-18 free throws (66.7 percent). As for FC, the Lady Saints only connected on 5 of 24 three-pointers (20.8 percent) and only got to the free throw line five times. Of those five opportunities, the Lady Saints could only make one foul shot (20.0 percent).

After a tightly contested first quarter between both teams, the score was tied at 18-18. The contest continued to be a back-and-forth-affair until Destiny Garrett scored for GSW and gave the Lady Hurricanes a 26-24 lead around the 5:00 mark of the second quarter. This sparked a 7-0 run by GSW and by halftime, the Lady Hurricanes had a 33-26 lead. That 7-0 run ended up being the turning point of the game, as the Lady Hurricanes would never again relinquish their lead.

Williams led GSW in first half scoring with 10 points and Langley scored eight of her game total of 18 points in the first half for the Lady Hurricanes. 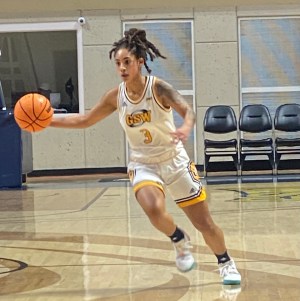 Early in the third quarter, GSW went on a 6-2 run that was capped off by a three-pointer from Jacquelyn Levay. As the third quarter continued, both teams cooled off somewhat offensively, but the Lady Hurricanes still maintained a 41-30 lead before a media timeout was called with 3:47 left in the quarter.

Out of the timeout, both teams traded baskets over the next two minutes, but Jaleah Storr gave GSW a 46-35 lead when she drilled a three-pointer from the left side with a little over a minute left in the third quarter. Buse Utku responded for the Lady Saints with a three-pointer of her own, but Storr scored again just before the horn sounded to end the third quarter and the Lady Hurricanes had a 48-38 lead with one more quarter to play.

With 8:55 to go in the game, Williams struck from beyond the arc for the Lady Hurricanes and GSW enjoyed a 51-39 lead. This prompted FC to call a timeout, but GSW continued to dominate offensively, as Langley received a pass and scored on the inside to give the Lady Hurricanes a 54-41 lead with about 7:30 to play. 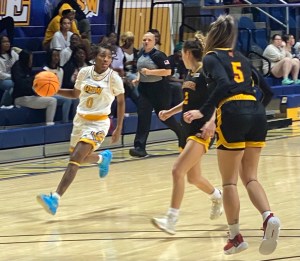 Over the remaining six minutes of the contest, GSW used its defense to limit the Lady Saints’ opportunities to score and continued to generate points on the offensive end. As a result, the Lady Hurricanes picked up their 10th straight victory; a 67-52 win over FC.

Miracle Parker led the Lady Saints in scoring with 13 points and Sharale McCormick posted a double double with 12 points and 13 rebounds.

The Lady Hurricanes, ranked 11th in the nation in the NCAA Division II national poll, will try to extend their winning streak to 11 games when they travel to Aiken, SC on Saturday, January 14 to face the Lady Pacers of the University of South Carolina-Aiken. Tip off is scheduled for 1:30 p.m.