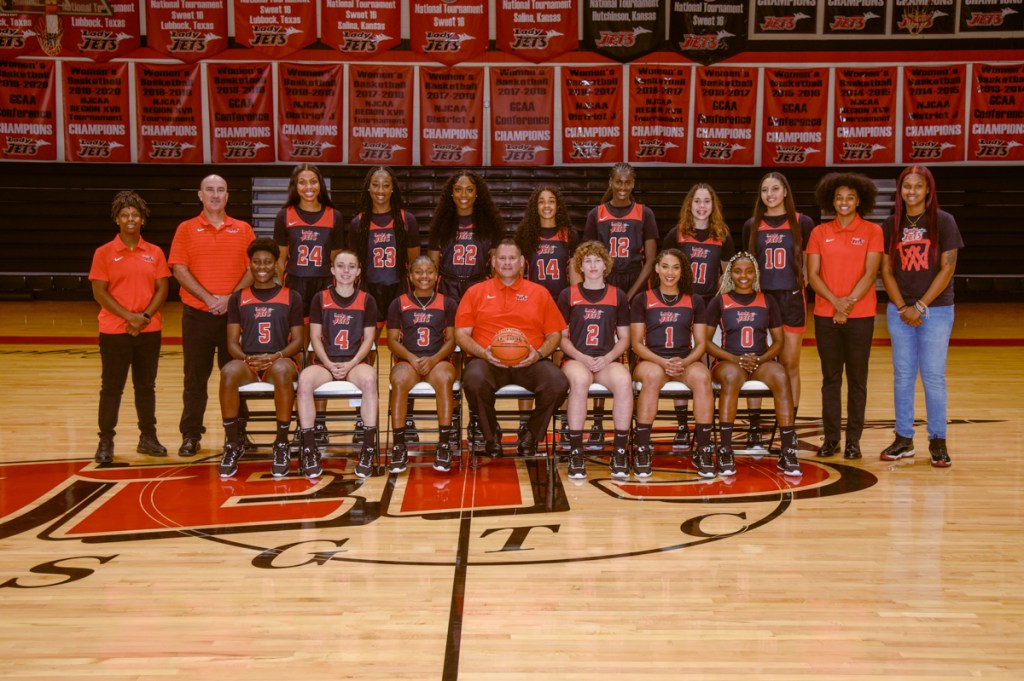 The SGTC 2022 – 2023 Lady Jets are ranked number one in the nation. This is the first time a South Georgia Technical College team has held that honor. Photo by SGTC Athletics

AMERICUS – The South Georgia Technical College Lady Jets moved into the first-place position in the National Junior College Athletic Association’s (NJCAA) Division I women’s basketball poll released this week. This is the highest ranking ever achieved by the Lady Jets in their 18-year history and the only time a South Georgia Technical College men’s or women’s basketball team has received the top ranking.

“This is a tremendous honor for our program and for our players,” said South Georgia Technical College Athletic Director and Lady Jets head coach James Frey.  “I am happy that the ranking brings positive recognition to South Georgia Tech, the Technical College System of Georgia (TCSG) and the Georgia Collegiate Athletic Association (GCAA).  As a coach who has been doing this a while, I personally take rankings in stride because I know we are one bad game away from ‘they used to be number one.’”

The Lady Jets are 20 – 1 overall and their only loss of the year came at the hands of Gulf Coast State College, 76 – 61 in the opening game of the season.  Gulf Coast moved to first place in the nation three weeks ago but dropped to sixth place after a 76 – 83 loss to Chipola last week.  Gulf Coast is now 16 – 1.

“I am thankful for our young ladies focus and work ethic.  When we lost the first game at Gulf Coast, I told them in the locker room that we had the chance to have a special season if they all bought in and did the little things daily to improve,” said Coach Frey.  “They have done that and it’s put us in position to win games against some very good teams.”

Coach Frey acknowledged that there are a lot of good two-year Division 1 women’s basketball teams in the nation and he feels like being “number one is a result of the culture we’ve been able to build here.  This is several years of work, recruiting high integrity young ladies who do a great job in the community, in the classroom, and on the court.  All of this begins before we pick up a ball,” explained Frey.

“Having a team that really cares about one another and wants each other to be successful in life is what we preach.  It is 100% about our culture.  I’ve said this since I became a good coach, you can win with good people.  You don’t have to settle for bad energy people in your program to be successful.  That is what I am most proud of.  We have a bunch of really good young ladies and they are ranked number one in the country.”

Coach Frey also acknowledged that the Lady Jets are also piggy backing off the incredible success former Lady Jets head coach Brandon Harrell had as head coach of Georgia Highlands last year.  “I think the country is looking at the GCAA a little differently now.”  Georgia Highlands lost to Tyler Texas in the NJCAA finals in 2022 and finished the season 32 – 3 overall.  They were seeded third in the nation.

Trinity Valley moved up to second behind South Georgia Tech in the NJCAA rankings with a 16 – 1 record.  Eastern Florida State, which enjoyed a number one ranking earlier this year, is now third followed by Northwest Florida State and Blinn.  Gulf Coast dropped to sixth and they are followed by Southern Idaho, McLennan, Collin and Eastern Arizona.  New Mexico is ranked 11th, Jones is now 12th with Dodge City, Wabash Valley and Shelton State closing out the top 15.

South Georgia Technical College is still the only Georgia College ranked in the NJCAA Top 25 poll but East Georgia State College did earn an honorable mention.  The Lady Jets will travel to Swainsboro on January 28th for a rematch with East Georgia.  The Lady Jets defeated East Georgia in Americus 86 – 74 December 9th.

In addition to the 1st place ranking in the national poll, the SGTC Lady Jets also had five players to be recognized for their individual efforts on the court.   The five Lady Jets featured in the national rankings include: sophomore center Fanta Gassama, sophomore Loes Rozing, sophomore Alexia Dizeko, sophomore Luana Leite and freshman guard Veronika Palfi.

Sophomore point guard Loes Rozing, 5’ 10” from Heiloo, Netherlands is the other Lady Jet ranked and she is currently 28th in assists per game averaging 4.7.

The Lady Jets will play their next three games on the road.  They travel to Albany Tech on Saturday, January 21st for a conference match-up at 2 p.m. before traveling to Denmark Tech on January 25th and Swainsboro to face East Georgia on January 28th.  The Lady Jets next home game will be on February 1st against Central Georgia Tech at 5:30 p.m. as part of a double-header with the Jets and Andrew College at 7:30 p.m.

The Jets will travel to Albany Technical College on Thursday, January 19th for a 7 p.m. game and then return home on January 21st for a 3 p.m. game against Central Georgia Tech.  They are scheduled to play East Georgia State in the Hangar on Monday, January 23rd as a make-up game.