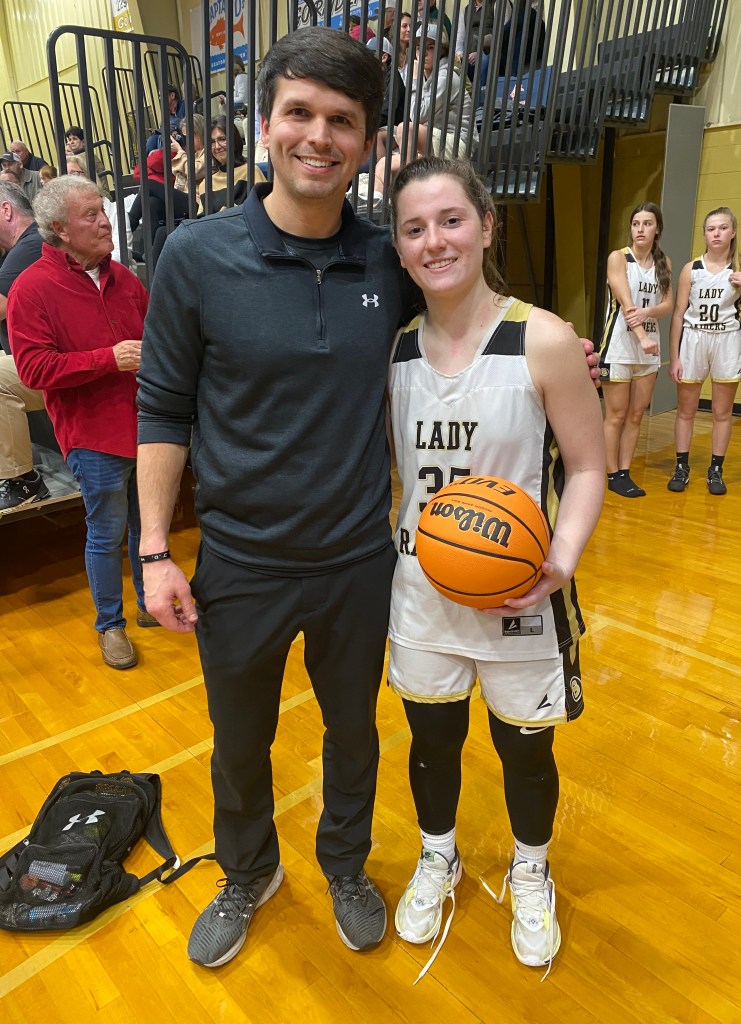 AMERICUS – Southland Academy standout senior guard Riley Mitchell was able to reach a rare milestone in high school player’s career on Tuesday night, January 24 when the Lady Raiders took on their archrivals Deerfield-Windsor (DWS) at the Melvin Kinslow Gymnasium. A Four-year starter, Mitchell reached the 1,000th point scoring mark of her career when she scored late in the fourth quarter. Unfortunately for her and her teammates, however, the Lady Raiders came up short as DWS edged out SAR 34-31 in front of a loud and raucous Melvin Kinslow Gymnasium.

“It feels great. I’ve been looking forward to it for a long time and I couldn’t have done it without my teammates helping me along the way,” Mitchell said when asked how it felt to reach the 1,000 point milestone.

“Riley has been a staple of this program for five years now,” SAR Head Coach Eric Israel said. “We’re gonna hate to see her go, but luckily, she’s not done yet. She’s going to continue to lead our team. We love her and we’re proud of her.” 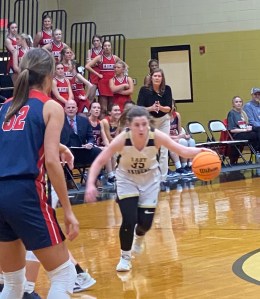 As far as the game was concerned, Israel remarked that the defense of the Lady Raiders kept them in the game when their offense was struggling. “Like we always preach, when your offense isn’t good, your defense is going to keep you in it,” Israel said. “Our defense was probably the best it has been all year. We just couldn’t hit any shots early. That was just hard to come back from, but our girls could have hung it up, but they didn’t. They kept battling and made it a three-point game. That’s just a really good Deerfield team over there and we will see them again soon,” Israel continued.

Mitchell led the Lady Raiders with 14 points and her fellow senior teammate Morgan Weaver scored 10. However, three of those 10 points came off a record-breaking three-pointer, as Weaver broke the Southland girls record for most three-pointers made in a season. This record of 51 three-pointers made in a season was previously set by former SAR standout guard Cassi Bass during the 2018-2019 season and Weaver currently has 56 this year so far. Lauren Duke had four points and J.C. Bailey chipped in three to round out the SAR scoring. 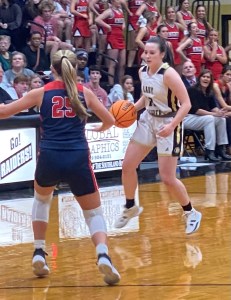 From an offensive standpoint, it was a difficult first half for the Lady Raiders and they trailed the Lady Knights 20-12 at halftime. Mitchell scored six of her game high of 14 points to lead SAR in the first half.

The Lady Raiders continued to play solid defense in the third quarter, just as they had throughout the first half. However, they continued to struggle offensively and didn’t score there first points of the second half until Weaver drilled a three-pointer with a little over four minutes left in the quarter to make the score 22-15 in favor of DWS. However, later on in the fourth quarter, Mitchell would score to reach the 1,000 point milestone of her SAR career, J.C. Bailey ended up hitting a three–pointer and Mitchell would strike again with a three-pointer with 22 seconds left to bring the Lady Raiders within three points at 34-31.

However, even though SAR would have one last chance to tie the game, the Lady Raiders came up short and the DWS Lady Knights escaped Melvin Kinslow Gymnasium with a 34-31 victory.

Joi Hubbard led DWS in scoring with 14 points and Gabby Harris chipped in nine for the Lady Knights in the winning cause.

The Lady Raiders will try to rebound from this setback when they travel down to Chula, GA on Friday, January 27 to take on the Lady Panthers of Tiftarea Academy. In the previous meeting between these two teams in Americus on Tuesday, January 10, the Lady Raiders edged out TA by the score of 39-35. Tip off for Friday’s game is scheduled for 6:15 p.m.