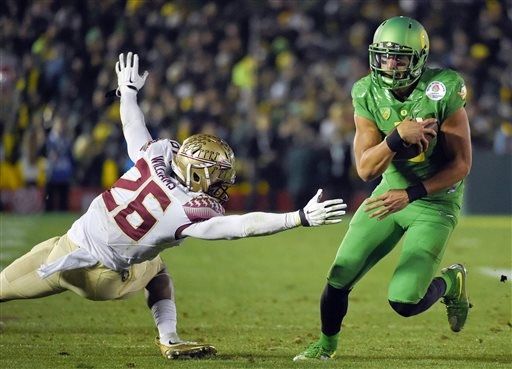 PASADENA, Calif. (AP) — Marcus Mariota and Oregon turned an avalanche of Florida State mistakes into a mountain of points and the Ducks rolled past the defending national champions 59-20 Thursday to turn the first College Football Playoff semifinal into a Rose Bowl rout.

Mariota and the second-seeded Ducks (13-1) scored six straight times they touched the ball in the second half, with five of the touchdowns covering at least 21 yards and the last four coming after Florida State turnovers.

In the matchup of Heisman Trophy winners, Jameis Winston matched Mariota’s numbers, but the Seminoles were no match for the Ducks. The Pac-12 champions will play the winner of the Sugar Bowl semifinal between Alabama and Ohio State on Jan. 12 in Arlington, Texas.

“It’s incredible. I’m so proud of these guys right here,” Mariota said. “We’ve got one more to take care of.”

Third-seeded Florida State’s winning streak ends at 29. In Winston’s first loss as a college starter, maybe his last game in college, he threw for 348 yards and turned the ball over twice.

No Heisman jinx for Mariota. He was mostly brilliant again. The junior passed for 338 yards and two touchdowns and sprinted in for a 23 yard-touchdown with 13:56 left in the fourth quarter that made it 52-20 and made the Ducks the first team to reach 50 points in Rose Bowl history. This was No. 101.

“59-20, I did not expect that,” Oregon defensive end Arik Armstead said.

The Ducks fans spent much of the final quarter mockingly doing the Seminoles’ warchant and tomahawk chop. Next stop: The Lone Star state to try to win the program’s first national title.

The Ducks sported T-shirts after the game that read “WON NOT DONE.”

The first playoff game at college football’s highest level, the type of postseason game fans have longed for forever, looked like it would be a classic for a little more than two quarters.

Under a cloudless sky, on a chilly day in Pasadena, the Rose Bowl featured the third matchup of Heisman Trophy winners and a couple of quarterbacks who could be vying to be the first overall pick in April’s NFL draft.

Mariota and Winston were both OK in the first half, missing some throws and making some spectacular ones. It was Mariota who threw the only interception, just his third of the season. The late pick didn’t hurt the Ducks much because Florida State’s Roberto Aguayo missed a 54-yard field goal on the final play of the half.

For the sixth time this season, Florida State was trailing at the half.

And then the hole got deeper.

The Seminoles’ first turnover was a huge swing. Freshman Dalvin Cook was stripped by Derrick Malone Jr. with Florida State in Oregon territory. The Ducks quickly flipped the field and Freeman scored his second touchdown of the day from 3 yards out to make it 25-13.

Oregon coach Mark Helfrich had called the Seminoles “unflappable” during the week leading up to the Rose Bowl — and they showed it on the next drive.

Winston threw an 18-yard touchdown pass to freshman Travis Rudolph. Midway through the third quarter it was 25-20 Oregon and then it was Mariota’s turn.

He zipped a pass to Darren Carrington near the sideline and the receiver made one cut and was gone for a 56-yard touchdown that made it 32-20.

Instead of an answer from Florida State, this time another fumble by Cook and the wave of big plays and points that the Ducks do better than any team in the country started rumbling.

Two plays after the turnover, Mariota hit Carrington for a 30-yard touchdown and it was 39-20 and the Rose Bowl, filled mostly with green and yellow, was rumbling, too.

To win the national championship last season, Florida State erased an 18-point lead against Auburn at the Rose Bowl, but that was in the first half.

Coach Jimbo Fisher’s crew were comeback kings this season — they came from 17 down against North Carolina State and 21 back against Louisville — but this was the steepest hill to climb yet.

With the sun just about set behind the San Gabriel mountains, Florida State faced a fourth-and-five in Oregon territory. Field goals weren’t going to get it done. The ‘Noles had to go.

Winston had lots of time but couldn’t find a receiver. He was flushed from the pocket and as he loaded to throw the ball slipped out of his hands. The fumble bounced into Tony Washington’s arms and the defensive end went 58 yards for a score.

“It was just a crazy play,” Winston said.

The wave had washed over Florida State. And it just kept coming.

Winston threw a pick on the next possession on a tipped ball and was so frustrated when he got to the sideline Fisher appeared to threaten to bench him if he didn’t calm down.

By the time Mariota raced into the end zone, day had turned to night in Pasadena and the Seminoles were done.

Florida State had not lost since Nov. 24, 2012, to Florida. Winston had never lost a college start in 26 tries.

The next Florida State turnover, a fumble by Jesus Wilson, made it five second-half turnover by the Seminoles. It was a problem all year for the ‘Noles, who came into the game 84th in the nation in turnover margin (minus-3), and in the playoff it was ultimately what doomed them.

“We beat ourselves,” Winston said. “We were never stopped at all.”

Winston, whose two years at Florida State have been filled with spectacular play on the field and controversy off, still has two years of eligibility left, but he has nothing left to prove.

Mariota and the Ducks are moving on, with a chance to add the biggest prize of all — the only significant one missing — to their trophy case.