China’s wealthy are rediscovering a taste for tiger bone wine 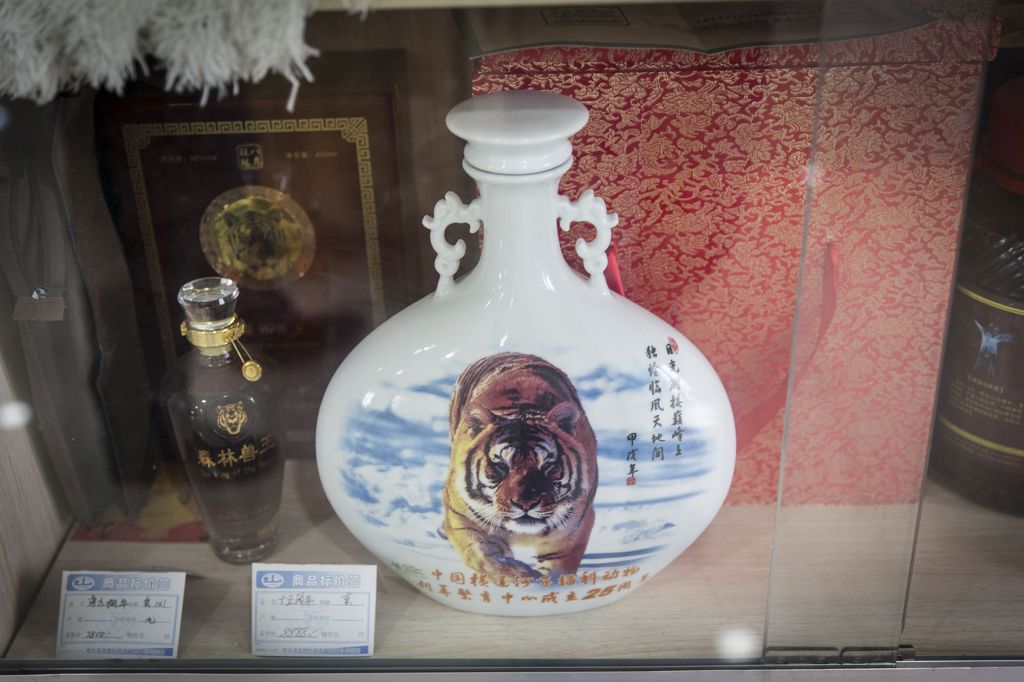 GUILIN, China — To the thump of loud dance music, four tigers roll over in succession, and then raise themselves up onto their haunches. A man in a shiny blue shirt waves a metal stick at them, and they lift their front paws to beg.

The “show” takes place twice a day in a gloomy 1,000-seat auditorium — empty on a recent afternoon except for one Chinese tourist, two reporters and a security guard, its uneven floorboards, broken seats and cracked spotlights painting a picture of neglect.

Outside, hundreds of tigers pace back and forth in small, scrubby enclosures or lie listlessly in much smaller, concrete and rusted metal cages. An occasional plaintive growl rends the air.

This is the Xiongshen Tiger and Bear Mountain Village in the southern Chinese city of Guilin, one of the country’s biggest tiger farms. It is part of a booming industry that is threatening to drive this magnificent animal toward extinction in the wild, conservationists say, by fueling demand for “luxury” tiger parts.

Encouraged by the tiger farming industry, China’s wealthy are rediscovering a taste for tiger bone wine — promoted as a treatment for rheumatism and impotence — as well as tiger skin rugs and stuffed animals, sought after as status symbols among an elite obsessed with conspicuous consumption.

That trend, in turn, is only making tiger poaching more lucrative across Asia — because wild tigers are still cheaper to kill and smuggle across borders than captive bred ones and often preferred by consumers. Farming has removed any stigma from tiger products and undermined global efforts to stamp out the illegal trade.

“The argument put forward by the tiger-farming lobby is that farmed tiger products will flood the market, relieving pressure on wild tigers,” said Debbie Banks of the Environmental Investigation Agency (EIA). “This is a ridiculous notion and has turned into a disastrous experiment.”

Tigers numbers globally may have stabilized in recent years, yet they are still perilously low, and wild tigers are still dying in record numbers in India, their main habitat, with many killed by poachers to satisfy demand from China.

Under global pressure, China banned trade in tiger bone and rhino horn in 1993, while traditional Chinese medicine practitioners also removed the products from their pharmacopeia, moves that conservationists says tamped down demand and helped stabilize the population of Siberian tigers in north Asia.

But by then, China’s tiger-farming industry was already beginning to take off. The private Xiongshen farm was established in 1993, by a former duck and snake breeder, Zhou Weisen, with investment from State Forestry Administration; its main competitor is a state-run farm in the northern province of Heilongjiang, set up in 1986.

Tigers are easy to breed in captivity, and their numbers went from a handful to a few hundred and then thousands. Today, there are thought to be between 5,000 and 6,000 tigers on about 200 farms in China, mostly born into captivity and many kept in appalling conditions — compared to less than 4,000 of the animals left in the wild. Among them are Siberian (or Amur), South China and Bengal tigers.

Ever since establishing the farms, Chinese wildlife officials have been campaigning for international approval to lift the ban on tiger bone use, arguing that the country has a right to use its “domestic natural resources” as it sees fit, and that tiger bone wine — rice wine in which bones from the big cats have been soaking — is medically effective and part of Chinese culture. They contend that the trade could be regulated effectively to reduce the demand for wild tiger parts.

But even as the rest of the world disagrees, it appears that China has simply gone ahead anyway. Multiple probes by the EIA and International Fund for Animal Welfare over the past decade, together with The Washington Post’s own investigation, show the tiger bone wine industry has boomed, with support from the SFA.

Xiongshen alone says it houses more than 1,000 tigers — although fewer than 200 are available for tourists to view — and 500 bears, legally farmed to extract their bile for a different wine.

It presents itself as a tourist destination, but its bleak animal enclosures and show — where bears also twirl hula hoops around their necks and cycle unsteadily across uneven floorboards, while a goat balances nervously on a high beam with a monkey on its back — barely attract an audience.

On a recent afternoon, a Washington Post team saw just five tourists admitted over several hours, each paying about $7.

In a building on the compound, the farm’s real money-spinner is on sale — bottles of wine, in the shape of tigers, listing as a main ingredient the bones of “precious animals,” and of African lions. Even the name on the bottle — “tonic bone wine” — uses a Chinese character that rhymes with the word for tiger. Everything is designed to tell consumers this is tiger bone wine, without explicitly saying so. Even the park admission tickets boast of government approval to make wine from “the skeletons of animals which have died of natural causes” to support the tiger breeding program.

Across town, retailers are more open, boasting that the tiger-shaped bottles do indeed contain wine in which tiger bones have been steeped. A bottle left to mature for three years sells for the equivalent of $80, six years for $155, while a vintage eight-year wine retails for $290.

In 2006, an IFAW investigator gained access to the farm’s winery in the town of Pingnan, where the manager showed off 400 wine vats, boasting that each contained a tiger skeleton; one vat, he said, was reserved exclusively for consumption by a senior local official.

Zhou’s office said he declined to be interviewed for this report.

At the state-run farm in Heilongjiang, tourism is mixed with conservation as the public rationale for keeping another 1,000 captive-bred tigers. Chief engineer Liu Dan said the long-term goal was to reintroduce animals back into the wild but said it could take generations of tigers before any were ready.

In recent months, two Siberian tigers reintroduced into the wild by Russian President Vladimir Putin crossed into China and caused havoc, killing goats, chickens and even a pet dog before returning home.

Conservationists say China’s captive bred tigers would be even more of a hazard: accustomed to people and used to eating livestock, they would head straight for villages, where they would kill or be killed. Cross-breeding also means the animals have no value in preserving the gene pool of wild tiger species. But Liu rejects that criticism, as well as the wider critique of the farming industry that he says comes from “NGOs and foreign groups.”

“They want to ruin the image of China’s government and crack down on traditional Chinese medicine,” he said. “Some of them are funded by foreign medical syndicates.”

Today, bottles of “bone invigoration liquor,” with a picture of a tiger on the front, are openly sold on the premises, with sales staff telling visitors it is made with the bones of tigers that had died of natural causes.

If true, that would be a direct contravention of China’s own law and against the spirit of a 2007 decision under the Convention on International Trade in Endangered Species that tigers should not be bred for trade in their parts.

But if the prospect of turning tigers into wine appalls many animal lovers, it is the trade in tiger pelts that is even riskier for the world’s remaining wild animals. Across China, taxidermists offer tiger skin rugs or stuffed animals in a variety of poses — such as climbing a mountain — complete with permits from the SFA.

Skins from captive bred tigers helped perpetuate “the desirability and prestige of decorating your home with a tiger skin rug,” said Banks of the EIA. That in turn helped encourage poaching, because the costs of raising captive tigers and of “wining and dining local bureaucracy to secure licenses” makes them more expensive than wild ones, she said.

Presented with evidence of the tiger skin trade at a CITES meeting in July, Chinese officials admitted for the first time that their government was indeed licensing the sale of pelts, according to participants.

But even more grisly than the trade in skins was a report from Leizhou in southern China in March that police had busted a gang who would slaughter tigers in front of a paying audience of local officials and businessmen.

At least 10 were killed on separate occasions, according to police. They would then be sold for parts and meat, a prized delicacy at some banquets. The butcher, a man named Huang who had learned his trade slaughtering pigs, was reported to have died in an accident while trying to escape arrest.

But while some arrests are taking place, the political will to end tiger smuggling is patchy at best. Between 2005 and 2012, the EIA says it has supplied the Chinese government with evidence of its meetings with several traders involved in the trans-Himalayan smuggling of big cat skins, in the hope that police would start their own investigations. “The individuals we met are still in operation,” Banks said.

At the CITES meeting in July, a working group was established to look into ending the tiger trade, with China in the chair. But pressure for change is also mounting at home as part of a review of China’s Wildlife Law, which promotes the domestication and breeding of wildlife and the “utilization of wildlife resources.”

Conservationists have been lobbying hard for a change in emphasis, away from utilization and toward conservation of habitats and of animals in the wild, but they face significant opposition from a wealthy and powerful tiger-farming lobby, said Mang Ping, a professor specializing in ecological ethics at the Central Institute of Socialist Studies in Beijing.

In December, reports emerged that the new law will stress the importance of animal welfare. That might be good news for animals kept in zoos and farms, said Mang, but not if it is “used as an excuse for using and breeding wildlife.”

What is needed, conservationists say, is a clear government decision to outlaw the trade in tiger parts — backed up by enforcement and education. Otherwise, they say, these big cats may ultimately be reduced one day to the status of farm animals.

There is also some hope that President Xi Jinping’s crackdown on corruption could benefit tigers, just as it has already thrown a lifeline to the world’s sharks. In 2013, the government outlawed shark fin soup at official banquets as part of an effort to curb lavish displays of official wealth and consumption.

Like ivory products, tiger skins and tiger bone wine are often presented to officials as bribes. Several pelts were reported to be among a huge haul of luxury goods seized when former lieutenant general Gu Junshan was charged with corruption and abuse of power in March, for example.

In 2010, at an International Tiger Forum in St. Petersburg, then-Premier Wen Jiabao joined other world leaders in promising to end the tiger trade but failed to follow through. The hope now is that Xi will be more decisive and more effective.

“I firmly believe he knows the risk to China’s reputation,” said Gabriel of the IFAW. “This is not contributing to China’s economy at all; it just contributes to China having a bad name.”