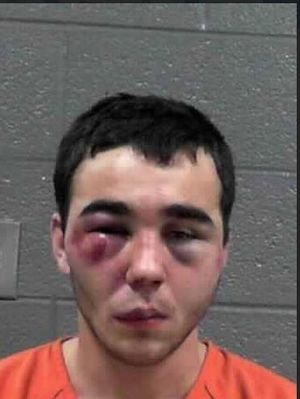 A shootout in Lewisburg, West Virginia that injured two police officers and one suspect ended in the grisly discovery of two dead bodies in the bed of a truck, believed to belong to an elderly couple reported missing two states away.

Police Lt. Jeromy Dove and Patrolman Nicholas Sams pulled a white Suburban over around 4 p.m. Thursday, Lewisburg Police Chief Tim Stover said. A red Chevrolet pickup truck also pulled off to the side of the road in front of the Suburban.

Stover said when Dove and Sams asked Edward Campbell for identification, he instead “produced a hand gun and started firing” at the two officers, neither one of whom had drawn a weapon at that point. A third Lewisburg Police officer, Cpl. J.M. Arbaugh, arrived on the scene just as the shooting started. All three officers retreated and sought cover behind a police vehicle and returned fire, striking the alleged shooter.

The other suspect, Eric Campbell, fled in the red truck and was caught by police later, having wrecked the truck further down the Interstate, according to West Virginia State Police Sgt. W.A. Pendleton, who said the vehicle went over the guardrail.

As Eric Campbell fled, an injured Lt. Dove radioed for assistance. “Jeromy yelled for help at 4:13 (p.m.),” Stover recounted. “The whole (incident) only took 6 minutes; the shooting was over in seconds.”

Dove and Sams were hit with shrapnel and “possible grazing bullets,” Stover said. They were taken to Greenbrier Valley Medical Center for treatment of superficial injuries. Both officers “took direct shots to the vest,” however, leading the law enforcement personnel who spoke at Friday’s news conference to all agree the body armor Dove and Sams wore probably saved their lives.

“The bulletproof vests (were) a very good thing today,” a visibly shaken Stover said. “It saved them from more serious injuries and maybe much worse than that.”

When Greenbrier County law enforcement officers searched the red pickup in which Eric Campbell had fled the scene of the I-64 shootout on Thursday, they found two “recently deceased bodies” under a mattress in the bed of the truck.

Media reports say the bodies are believed to be Jerome Faulkner, 73, and his wife, Dora Faulkner, 62, of near Oxford, N.C. They were reported missing Thursday when they couldn’t be located in the hours following a fire at their home. The couple’s red Chevrolet pickup truck was also missing.

At least one of the suspects — Edward Campbell — is currently out on bond on an aggravated assault charge, according to Cahill.

Stover expressed his own opinion of the Campbells during the news conference. “These two individuals represent the face of evil and had no regard for human life,” the chief said.

Tina Alvey writes for the Register-Herald.