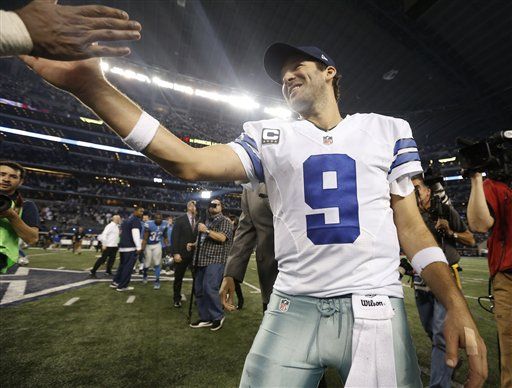 In their first playoff game in five years, the Dallas Cowboys needed a rally and some clutch plays.

They got them in beating the Detroit Lions 24-20 Sunday in an NFC wild-card game — along with a key reversal on a pass interference penalty.

Tony Romo threw two touchdown passes to Terrance Williams, the second for 8 yards for the winning points with 2:32 to go. That brought the Cowboys (13-4) back from a 14-point deficit.

“You just have to stay in the moment and understand the game,” Romo said. “It doesn’t end after the first quarter, second quarter. There’s a long way to go and it wasn’t going well, but usually things dissipate a little bit; it’s not quite as crazy as it is early. You just have to keep calm. I’ve played enough games to understand that.”

Next is a trip to Green Bay, their first visit there in the postseason since the Ice Bowl loss in 1967.

The Lions (11-6) went 99 yards for one of two first-quarter touchdowns. They had the ball and a three-point lead in the final period when officials reversed without an explanation a pass interference penalty against Cowboys linebacker Anthony Hitchens.

That led to a fourth-and-1 and Detroit punted. But Sam Martin’s kick went only 10 yards, and Dallas headed the other way to the decisive TD.

Indianapolis beat Cincinnati 26-10 in Sunday’s other game. The Colts head to Denver next Sunday.

On Saturday, Baltimore beat Pittsburgh 30-17 and will play at New England next Saturday. In the first game of the weekend, Carolina downed Arizona 27-16 and will head to Seattle for a meeting next Saturday night with the defending Super Bowl champions.

With the Bengals as their opposition, the Colts didn’t need to be great. It’s the playoffs, after all, and Cincinnati simply doesn’t win in the postseason.

Andrew Luck threw for 376 yards and one touchdown, Daniel “Boom” Herron ran for another score, and Indianapolis dominated the second half. The Colts made a fair share of mistakes, but nothing like the Bengals (10-6-1), who became the first team in NFL history to lose four consecutive opening-round playoff games.

They also are 0-6 in the postseason under coach Marvin Lewis, 0-4 with Andy Dalton at quarterback.

“In the big moments, the guys that are our big guys have to make the plays,” veteran left tackle Andrew Whitworth said. “You see it every week. You look at the teams that win, their top guys make the plays that get them where they’ve got to go. It’ll be no different here. When we get in those situations, our big players have to make huge plays.”

When the Colts (12-5) head to AFC West winner Denver (12-4), Broncos quarterback Peyton Manning gets another shot at his former team and the QB who replaced him.

“On to next week,” Luck said. “It’s the playoffs. There’s a difference. You’ve got to move on; you’ve got to keep that journey alive.”

Joe Flacco continued his impressive postseason performances, throwing for two second-half touchdowns to beat the Ravens’ bitter AFC North rival. The Ravens (11-6) won in Pittsburgh for the first time in the postseason; Pittsburgh had been 9-0 in third games of a season against the same opponent.

The Ravens are 7-4 on the road in the postseason since John Harbaugh took over as coach in 2008 and Flacco was drafted.

“We’ve been on the road a lot in the playoffs,” Harbaugh said. “Maybe that’s it.”

“Bring ’em on,” linebacker Pernell McPhee said. “We’re going to work hard in practice this coming week and go up there and play our best game. We’re going to play Ravens football. And with a great game plan, I know we’ll be ready for anything.”

Just the second team with a losing record to win a division title, the Panthers (8-8-1) took their fifth straight game by ending Arizona’s season. It was Carolina’s first playoff win in nine years.

The defense held the Cardinals (11-6) and third-string quarterback Ryan Lindley to 78 yards, the fewest in NFL playoff history.

They might not find such a meaty opponent next week when the AFC South champs travel to Seattle.