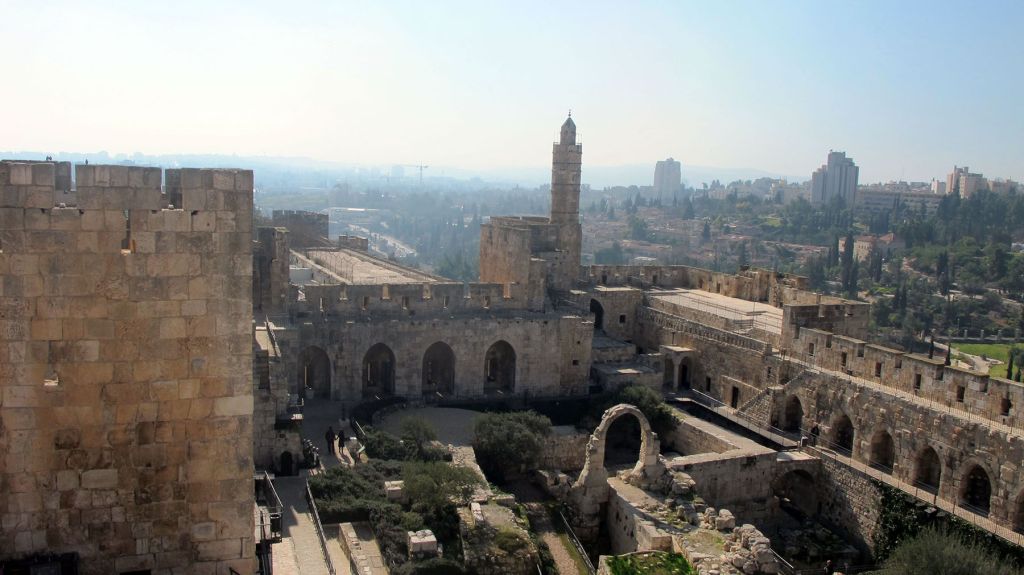 JERUSALEM — It started 15 years ago with plans to expand the Tower of David Museum. But the story took a strange turn when archaeologists started peeling away layers under the floor in an old abandoned building adjacent to the museum in Jerusalem’s Old City.

They knew it had been used as a prison when the Ottoman Turks and then the British ruled these parts. But, as they carefully dug down, they eventually uncovered something extraordinary: the suspected remains of the palace where one of the more famous scenes of the New Testament may have taken place — the trial of Jesus.

Now, after years of excavation and a further delay caused by wars and a lack of funds, the archeologists’ precious find is being shown to the public through tours organized by the museum.

The prison “is a great part of the ancient puzzle of Jerusalem and shows the history of this city in a very unique and clear way,” said Amit Re’em, the Jerusalem district archeologist, who headed the excavation team more than a decade ago.

For Re’em, the building has yielded a trove of thrilling discoveries from across the centuries — symbols etched into old jail walls by prisoners from the Jewish resistance fighting to create the state of Israel in the 1940s, fabric-dyeing basins from Crusader times and the foundation walls and an underground sewage system that probably underpinned the sprawling palace built by eccentric Roman Emperor Herod the Great.

But for the more than 1 million Christian pilgrims who visit Jerusalem each year, the site is especially significant because it could have been an important place in the life of their savior.

“For those Christians who care about accuracy in regards to historical facts, this is very forceful,” said Yisca Harani, an expert on Christianity and pilgrimage to the Holy Land. “For others, however, those who come for the general mental exercise of being in Jerusalem, they don’t care as long as [their journey] ends in ‘Golgotha’ — the site of the crucifixion.”

Today, many Christian pilgrims to Jerusalem walk the Stations of the Cross, or Via Dolorosa, taking them from where it is believed Roman procurator Pontius Pilate held the trial and sentenced Jesus to death, to where Jesus was eventually crucified and buried.

Harani said that since pilgrims started making their way to Jerusalem centuries ago, the route of Via Dolorosa has changed several times, depending on who was ruling the city at the time and what they deemed important.

In the Byzantine period, for example, the Via Dolorosa began closer to the area where the museum now sits in the western part of the city. It was only after the 13th century that the starting point moved to the Antonia Fortress, the site of a former Roman military barracks, which today sits beneath a school close to the al-Aqsa Mosque and the golden Dome of the Rock.

The debate over the site of the trial continues among Christian spiritual leaders, historians and archeologists. Questions about the location stem from various interpretations of the Gospels, which describe how Jesus of Nazareth was brought before Pilate in the “praetorium,” a Latin term for a general’s tent within a Roman encampment. Some say Pilate’s praetorium would have been in the military barracks, others say the Roman general would probably have been a guest in the palace built by Herod.

Today, historians and archeologists are certain that Herod’s palace was on the city’s western side, where the Tower of David Museum and the Ottoman-era prison now stand.

For Shimon Gibson, an archeology professor at the University of North Carolina at Charlotte, there is little doubt that the trial occurred somewhere within Herod’s palace compound. In the Gospel of John, the trial is described as taking place near a gate and on a bumpy stone pavement — details that fit with previous archeological findings near the prison, he said.

“There is, of course, no inscription stating it happened here, but everything — archeological, historical and gospel accounts — all falls into place and makes sense,” Gibson said.

The Rev. David Pileggi, the minister of Christ Church, also an Anglican guesthouse and heritage center near the museum, said the discovery inside the prison confirmed “what everyone expected all along, that the trial took place near the Tower of David.”

So, now that it is open to the public, could the prison become a new holy site for Christian pilgrims or even change the path of the Via Dolorosa?

“I don’t think that will happen anytime soon,” Pileggi said. “What makes a place holy is the fact that people have gone there for hundreds of years, prayed, cried and even celebrated there, so I don’t think there will be changes to the route anytime soon — but the prison does give us a clearer explanation of Jerusalem’s history.”

In the Tower of David Museum, named for the medieval citadel in which it sits, director Eilat Lieber hopes the prison will eventually become a standard attraction for Christians. Museum officials have already started working with tour guides versed in Christian history, who can explain the significance of the remaining rugged walls and carefully carved tunnels underneath.

“We will continue to develop the prison for visitors,” said Lieber, previously the museum’s educational director, who had hoped to expand it 15 years ago to create an educational space for children. Although that dream has still to materialize, Lieber is delighted that the prison, with its layers of history, will give all visitors a better understanding of the past.

“It’s like a cake,” she said. “Showing all the layers of Jerusalem.”