Lady ‘Canes remain undefeated at home with win over Montevallo 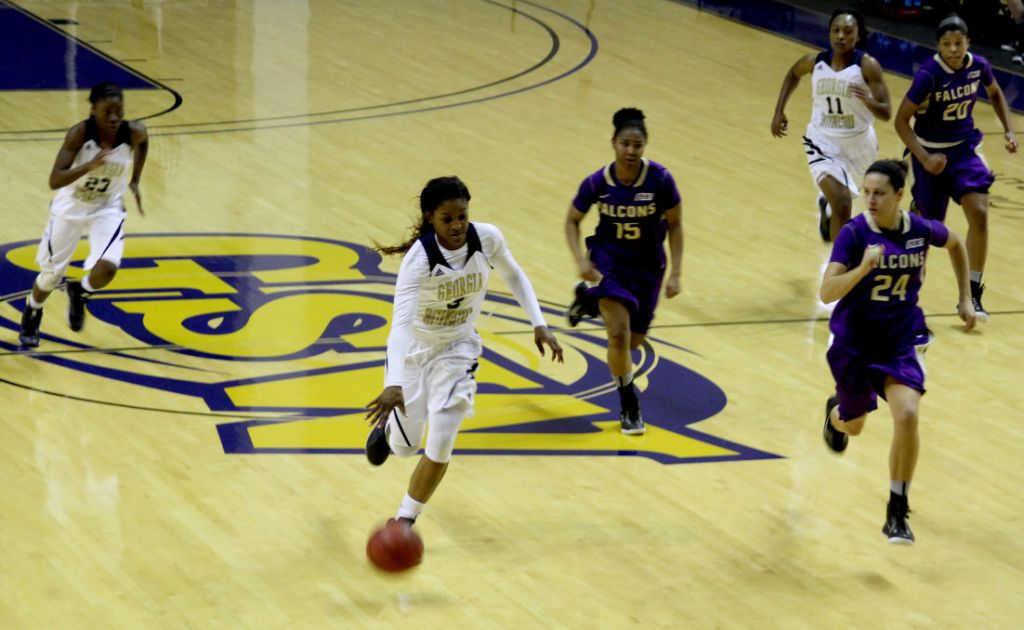 AMERICUS, Ga.- The Georgia Southwestern women’s basketball team remained unbeaten at home after a Jan. 3 76-58 victory over the University of Montevallo in the Storm Dome.

The Lady Hurricanes improved to 2-1 in Peach Belt Conference play and 8-2 overall, which ties a program mark for best start to a season during the school’s NCAA era (since 2006). Montevallo suffered its fourth-straight loss and drops to 1-9 overall and 0-3 in the PBC.

Southwestern started off strong with Danisha Green making a layup followed by a Ja’Quasha Sesler jump shot after a steal and a layup from Tiara Thompson that gave GSW a 6-0 lead.

Montevallo’s Jacquelyn Thompson cut the score in half with a 3-pointer, her first of seven, to make the score 6-3 at the 15:50 mark. Keishundra Jackson made a jump shot to get GSW a 5 point edge and Shanedra Lockett made a free throw to add another point to the lead. The Falcons made a jump shot and a layup to close the gap and Jacquelyn Thompson made her second 3-pointer to take the lead for the first time by one point at the 12:50 mark.

Sesler made two more layups and a free throw to catch up and Khabriyah Brown made two free throws to help close the gap by one point, making the score 25-24 at the 5:11 mark. The rest of the first was a one to two point game between GSW and Montevallo, going back and forth until Emili Russ made two free throws to give the Lady ‘Canes a two-point advantage going into the second half with a score of 35-33.

The second half took off from where the first half ended, with a one to two point advantage. Montevallo tied the game with a layup and GSW came back with a layup to take a two point lead but the Falcons tied it right back with another layup. Lockett and Thompson both made layups for GSW to get a four point lead at the 15:59 mark but Montevallo’s Jacquelyn Thompson made five free throws after they made a layup to take the lead once more.

Hudson and Green both made free throws to close the gap and Yvonna Dunkley made GSW’s first 3-pointer to take back the lead at the 8:15 mark. The Lady ‘Canes seemed to get a second wind and kept widening the gap for the last eight minutes and won with an 18 point lead 76-58.

The game was tied a total of seven times and the lead changed eight times. GSW had 40 points in the paint while Montevallo only had 18. GSW had a 14.3 3-point percentage, scoring only 2 of 14 and Montevallo had a 53.3 percent with 3-pointers making 8 of 15. The Falcons made their first six 3-point attempts and Jacquelyn Thompson made 7 of 12.

The Lady ‘Canes are back at home in the Storm Dome on Jan. 5 at 5:30 p.m. to face off against Georgia College.