‘I love you a latte’: Couple married at Starbucks 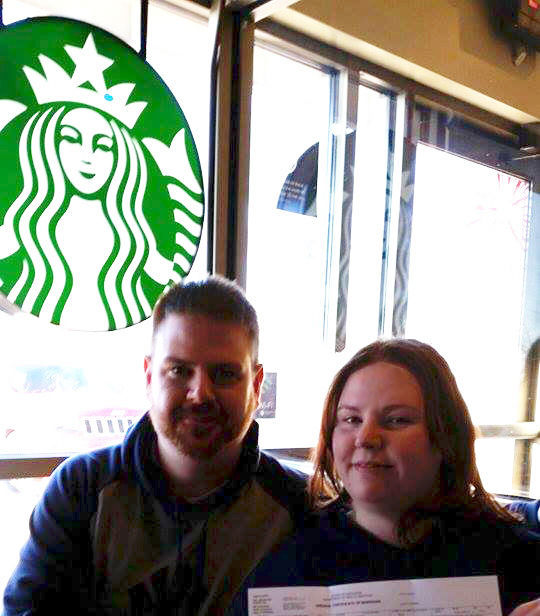 DeAnna Dodson, 31, of Beloit, Wisconsin orders a Triple Venti Caramel Macchiato most every morning. So the pun her now husband went with wasn’t just good for a laugh, it meant something, especially considering their wedding venue.

“I want to macchiato an honest woman out of you,” Jordan Senz, 32, told his bride the morning of New Year’s Eve as they exchanged lighthearted vows at Starbucks. But not their regular Starbucks.

If you call the lone Starbucks in Beloit, Wisconsin to inquire about the recent nuptials they hosted, the few seconds of silence will be followed by “um, there was no wedding held here.”

That’s because the couple, attempting to keep their unusual choice of wedding venue quiet (and to make it more convenient for family), decided to tie the knot at the Starbucks 15 minutes north in Janesville.

It didn’t work.
“We were actually hoping to fly under the radar,” Dodson laughs. “We said our vows privately at home to each other and pretty much meant to go to Starbucks to sign the papers.”
They didn’t dress up, nor did the handful of family members who came with them. There wasn’t a photographer. In fact there’s only one photo, maybe two. There may be video on a new brother-in-law’s phone.
“We weren’t trying to draw attention,” Dodson says. “We hadn’t told them [Starbucks] what we were doing. We didn’t announce ‘hey everybody, we have a wedding going on.'”
But someone at the packed store–it was around 9 a.m.–noticed there was a wedding going on. The local paper was called. A reporter showed up.
“It ended up being a little bit bigger than we were expecting,” Dodson says.
Engaged since 2007, Dodson’s and Senz’ is a uniquely American love story. Are they the only couple in the country–in the world–who can say they met at Burger King and got hitched at Starbucks?
“I guess so,” Dodson laughs.
The first part makes perfect sense: they both worked at the same Burger King store in 2001. Senz was back in the kitchen, Dodson was on register.
But why Starbucks?
Why not Starbucks?
Due to financial reasons, Dodson says they weren’t able to put together the small wedding they wanted to have this year.
“So when Jordan was driving home on the 17th he called and said ‘let’s just get married on New Year’s Eve,'” Dodson says. She said sure.
The only thing was that their county courthouse married people only once a month. Finding a judge who would agree to perform a wedding on New Year’s Eve also seemed problematic.
Enter Reverend Donnie.
“I had gone online and found a reverend, Rev. Donnie (Onley) and we were either going to have to go to his home or pick a public location to meet him at,” Dodson says. “We said we’ll meet him at Starbucks because we go to one every morning anyway.”
After the “I dos” and the kiss and the applause, the newlyweds walked to the counter and ordered their usuals. A caramel macchiato for Dodson, a grande caffé misto dark roast with two percent milk for Senz.
They bought Rev. Donnie a caramel Frappuccino. And Senz got in one more pun: “I promise,” he told his wife, “to love you a latte.”
And then they went to Cracker Barrel for breakfast.