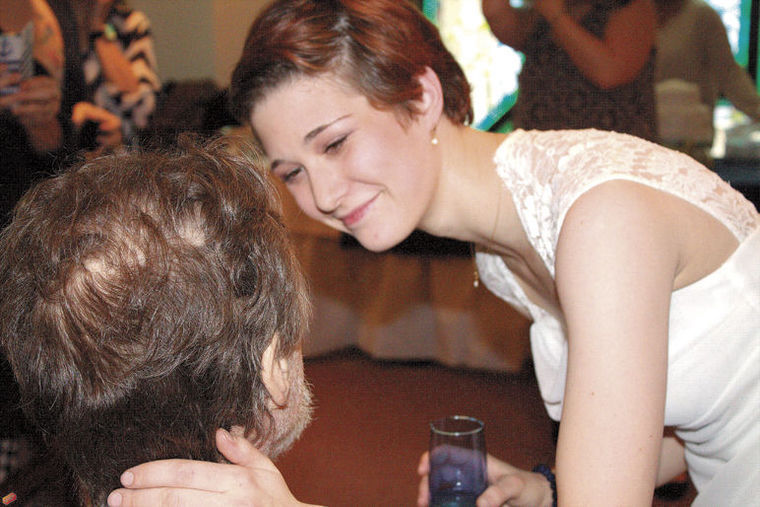 With only weeks to live, a 56-year-old Air Force veteran was able to give his daughter away on Saturday fulfilling a wish he and his daughter shared.

Too ill to leave the Jack C. Montgomery VA Medical Center in Muskogee, Oklahoma, Dan Cramer was wheeled to the hospital chapel at 10 a.m. There, a near-capacity crowd of around 50 celebrated the wedding vows of his daughter Kamille Cramer and her fiancé, Skylar Banning.

What would have taken months to plan, was completed in seven days with help from family and the hospital staff, Kamille said. “I don’t think I would have been able to do it years down the road with him not being here. It would have been a lot harder.”

“Usually, during the first dance the father comes out and cuts in between the bride and groom to dance with his daughter,” Kirk said. “But Kamille came out and put her arm around him as the music played.”

“When she (Kamille) found out that time was short she said, ‘I’ve got to get married, I want my dad at the wedding,’” Cramer said.

“That means everything to me,” he said through tears.

Kamille and Skylar originally weren’t in a rush to get married. But in August, Cramer went to the doctor feeling tired and weak. A chest x-ray revealed he had an aggressive tumor on his lung.

“We started talking about therapy and as time went on, they said, ‘get your affairs in order,’ so it just sorta steam rolled from there,” Cramer said.

Cramer said he’s currently receiving radiation treatments to resolve some polyps that doctors want to keep away from his spine so he won’t be paralyzed.

“I can’t walk really well, need a lot of help getting up and getting around,” he said. “I have no pain except in my shoulder and get a little hydrocodone and that helps that.”

Cramer will receive additional radiation therapy at nearby EASTAR Health System for another two weeks.

Then, he will stay in Tulsa at the Clarehouse, which provides free short-term, end-of-life care.

“I’ll just finish out there,” Cramer said. “I’m resigned to the fact that that’s it. But I know that God is with me.”

Kamille says the relationship between her and her father has had a tremendous impact on her.