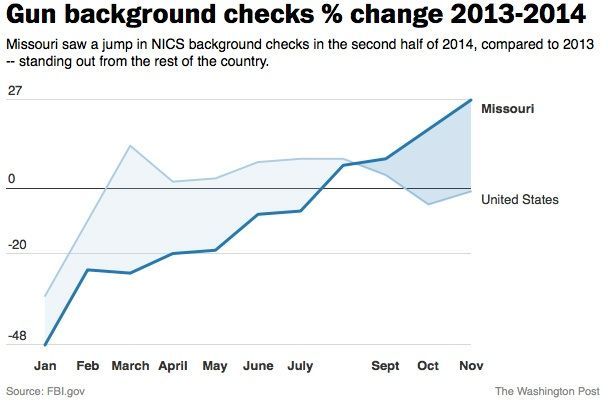 The firearms have been flying at County Guns. Located just a few miles from Ferguson, Missouri, this small gun shop has seen a flood of customers looking to buy that first handgun or maybe a backup Glock for the car or Mossberg shotgun for home protection.

“We have sold a boatload of guns in the last few months,” owner Adam Weinstein said.

Other gun shops near Ferguson have reported similar firearm frenzies. By every measure Missouri’s gun sales have spiked since August 9, when a white policeman shot and killed a unarmed black teenager in Ferguson, an incident that touched off continued protests and sporadic violence — and fed fear about personal protection.

Many people turned to guns. FBI firearm background checks in Missouri jumped 16 percent — by more than 26,000 — in the August-November period compared to the same four-month period in 2013. At the same time, background checks nationwide were flat.

In St. Louis County, where Ferguson is located, concealed weapon permit applications more than doubled in the final six months of 2014 compared to 2013, growing by nearly 1,800. And these statistics only hint at the true size of the surge: Gun sales between private citizens in Missouri don’t require a permit or background check, so they occur in the shadows.

Today, without doubt, there are many more firearms in and around Ferguson. More handguns. More shotguns. More assault-style rifles.

So what will the effect of all these new firearms be?

“I would expect some uptick in gun violence,” said Daniel Webster, professor and director of Johns Hopkins Center for Gun Policy and Research.

He doesn’t know how soon it will happen. Or how big the increase will be. But he believes the additional gun sales will have tragic repercussions.

Webster has studied gun violence for years. He found that Missouri’s repeal in 2007 of a law requiring a permit for handgun purchases contributed to a 14 percent increase in the state’s murder rate, even as the national murder rate fell. Missouri has some of the most relaxed firearm laws in the nation.

“More guns in a fairly unregulated environment make it not hard at all to see how problems can occur at some point later on,” Webster said.

Connecting gun sales to gun violence is difficult. (And controversial, as gun-rights advocates will note.) One of the few studies to look at the topic is a 1991 study that found a connection between firearm availability and homicide rates over a 45-year period in Detroit.

But already there signs of increased gun crime in the St. Louis region, which includes Ferguson.

St. Louis City finished 2014 with its highest murder rate in five years, with 159 killings. And aggravated assaults involving guns were up 9 percent from 2013. The city police chief told The St. Louis Post-Dispatch that he believed one reason for the increase was what he called the “Ferguson effect,” the belief that criminals were emboldened and police fatigued.

Webster said gun crime would still be expected to increase even if most of the increase in gun sales is to law-abiding owners. More guns mean opportunities for them to end up in the wrong hands. Webster recalled discussing the problem with a researcher who found that thieves looked for pickup trucks parked outside Busch Stadium in St. Louis during ballgames because they thought truck owners likely left their guns locked inside — firearms are prohibited at the ballpark.

Webster also pointed to the scant oversight in Missouri on private firearms transactions.

“There are more guns out there for someone to decide to transfer it to a prohibited person,” he said.

And then there are studies linking gun ownership to suicide risk.

It all adds up to the potential for a long, painful and unexpected legacy resulting from one gun death back in August.