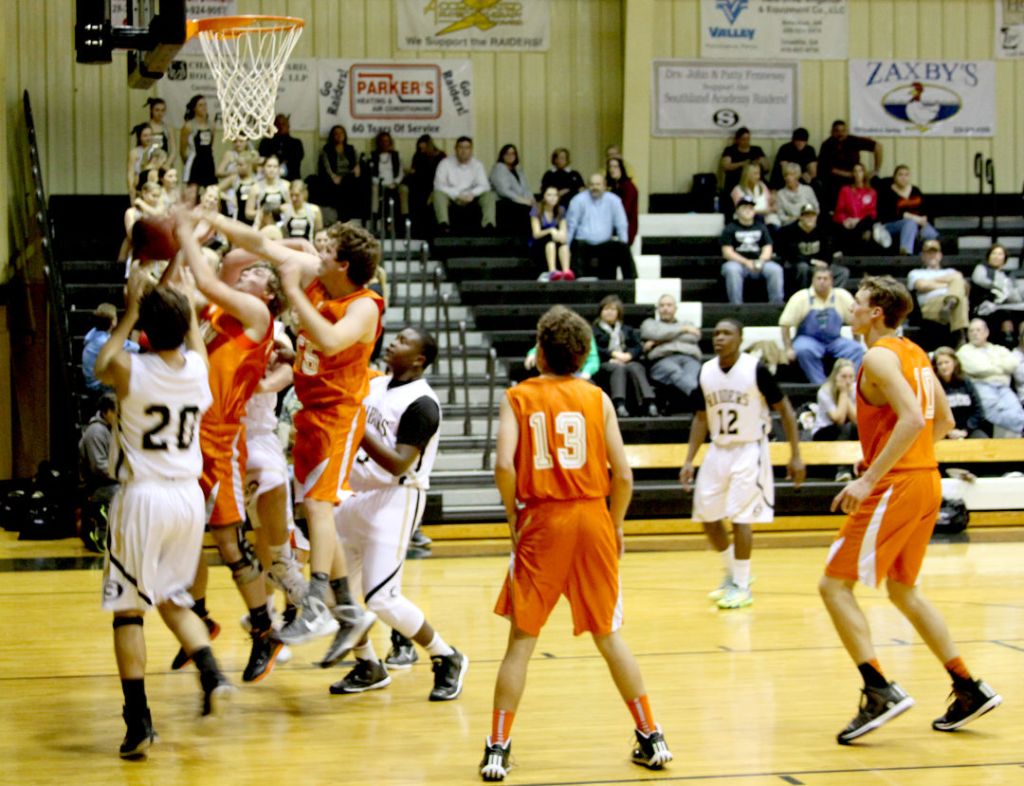 Southland Academy’s Raiders got a great start to this season’s region competition with a massive 86-43 victory over the Westwood Wildcats in Americus on Jan. 6. The victory brings the Raiders’ overall record to 5-2 and region record to 1-0. Westwood’s boys left the floor with an 0-5 overall record and 0-1 region record on the season.

The Raiders also traveled to Smiths Station, Ala on Dec. 29 to participate in the Glenwood School Christmas Tournament.

The team started the tournament strong on the 29th, pulling in a 75-70 victory over the Lee-Scott Academy Warriors, but fell 39-50 to the Tuscaloosa Academy Knights on Dec. 30. Tuscaloosa Academy currently holds a 10-1 overall record.

After the disappointing year-end defeat, Southland’s boys were eager to start the new year with renewed energy to begin region play. That energy definitely showed on the court on in the match with Westwood.

The Wildcats gained first possession at the tip-off and immediately put the game’s first two points on the board. Thirty seconds later, Southland’s Keyon Stone put the Raiders ahead with a three-pointer and Bo Moore widened the gap with a lay-up. A free throw from Southland’s Alex Roach brought the Raiders’ score to six before Westwood would put four on points the board to tie it up at the five minute mark.

Try as they may, this would prove to be the Wildcats’ last chance to pull ahead. The Raiders went on a strong offensive push, with Stone, Jamarcus Scott, Jamaal Rice, and Ridge Roland posting enough points to put Southland ahead 16-11 at the end of the first quarter.

The Raiders continued to pull further ahead in the second quarter, really moving the ball well and anticipating their opponents’ moves. Westwood made their move in the beginning of the quarter to pull within one and bring the score to 20-19 by the 2:30 mark, but their comeback would not last. A few fast break lay-ups from Landon Henson and Stone, coupled with perimeter shots by Roland and Rice put the Raiders ahead 26-19 with a minute to go in the half. The Wildcats put four more points on the board that were answered by a shot from beyond the arc by Stone to wrap up the first half with the Raiders ahead 29-23.

Southland returned refreshed from the break and began making moves that would nearly bleed the Wildcats dry in the third. The Raiders quickly began to widen the gap, staying around 11 points ahead four the first four minutes of the second half. Southland’s shooters began to heat up, beginning with an expert hook shot by Josh Mckie and a wide-open lay-up by Stone. A blocked pass then allowed Henson to dash up for a two and one, bringing the Raiders’ lead to 46-29. Scott continued the streak by pulling down an offensive rebound and taking it to the bucket, followed immediately by another basket assisted by Rice.

By the two minute mark, the Raiders were ahead 52-32 and showed no signs of slowing down. Stone, seemingly on fire, put eight points on the board with an underhanded lay-up followed by a foul shot, three more from beyond the arc and a field goal from the perimeter. The Raiders further advanced their lead by five more points before Rice capped off the quarter with a steal that he converted into an unguarded lay-up. The Raiders entered the final frame leading 67-32.

The fourth quarter was equally unproductive for the Wildcats, as Southland’s strong offensive push and deft defense held the team to only 11 points. The Raiders, however, were not finished and continued steadily scoring until the final buzzer.

Raider head coach Rundy Foster stated “Part of the reason for our success was the third quarter, we scored 38 points that quarter. Keyon Stone had 23 points alone in the quarter.” Stone posted 38 points overall in the match. Rice joined him in double figures with 14 points and Henson followed closely with 13. The Raiders forced 28 turnovers in the contest.

The Raiders return to the court on Jan. 9, traveling to Chula to face the Tiftarea Panthers at 8:30.