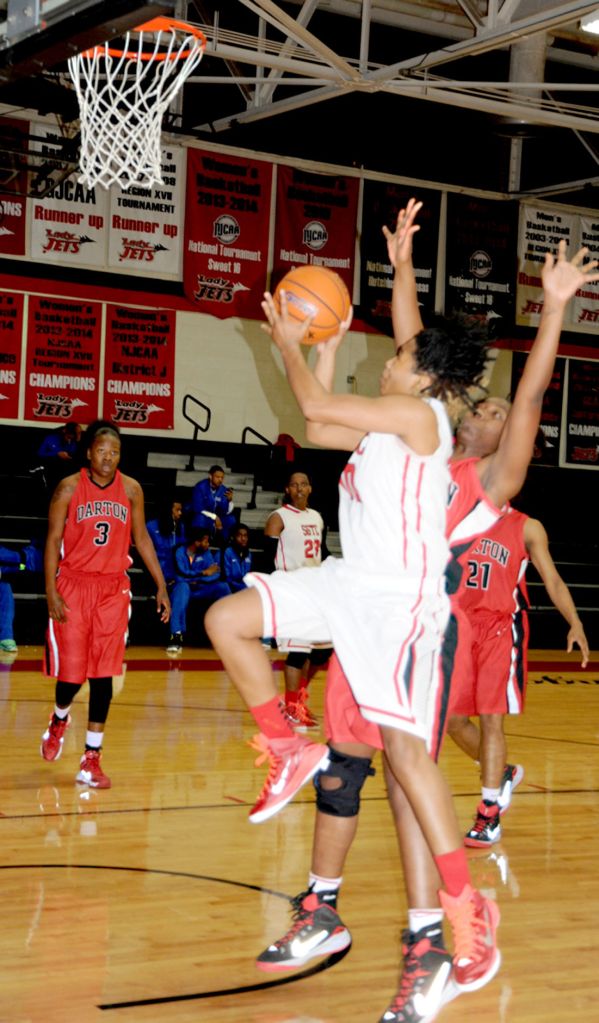 The South Georgia Technical College Jets and Lady Jets basketball teams did not start the New Year off on a good note as they both dropped decisions to nationally ranked Georgia Collegiate Athletic Association rivals South Georgia State College and Darton State College Wednesday night in the Hangar.

The Lady Jets suffered a 62–52 loss to Darton State College, which is currently ranked 20th in the National Junior College Athletic Association (NJCAA) in the opening double-header. Then the Jets came up three points short in their 84–81 loss to South Georgia State College, the NJCAA’s 24th top team in the nation.

“We are better than we played,” said South Georgia Technical College Athletic Director and Lady Jets head coach James Frey. “We had opportunities to come from behind, but we were just not able to execute when we needed to.”

The Lady Jets and Darton were tied for first place in the GCAA prior to the game. The Lady Jets were down 31–25 at the half and Darton was able to hold TaQuandra Mike scoreless in the first twenty minutes. Mike has been the leading scorer for the Lady Jets this season averaging 18 points per game. She came back and posted six points in the second half but that still left South Georgia Tech 10 points shy of an important conference win.

Darton is now ranked first in the Georgia College Athletic Association standings with a 5-0 record. They are 15–2 overall. South Georgia Tech fell to second place with a 4–1 GCAA record and a 13–4 overall performance. The Lady Jets only hit one three point shot all night in 11 attempts. Darton was two of seven from the three point line.

“We held Shanea Armbrister, Darton’s top scorer to 20 points,” said Frey, “but Shaineequah Fluellyn, who has been averaging six points a game, came out and was the leading scorer for Darton with 23 points.”

Alexis “Bre” Armstrong was the leading scorer for the Lady Jets with 19 points. She was the only Lady Jet in double-figures. Molly Brown had eight points and Deanna Williams added seven points. Offensively, the Lady Jets hit approximately 34 percent of their shots while Darton shot 45 percent. The Lady Jets shot 21 of 62 and Darton was 20 of 44.

After the disappointing loss to Darton in the first half of the double-header, the Jets came out and put South Georgia State College on notice with an impressive offensive first half that had them up 51–41 at the half. The Hawks came back and defeated the Jets 84–81, however. The Hawks are ranked second behind Central Georgia Tech in the GCAA with a 4–0 conference record. They are 15–1 overall. South Georgia Tech is tied for eighth in the GCAA at 1–4. The Jets are 8–7 overall.

SGTC’s Deriece Parts was six of 11 from the three point area in the first half and had a total of 21 points.  South Georgia State shut him down offensively in the second half and only allowed him one free-throw shot which left him with 22 points on the night.

He was the Jets’ leading scorer. Christian Nobels added 14 points and Eric Gooden posted 13 points. Ten of Nobels’ points were from the first half and Gooden was consistent with six in the first half and seven in the second half.

South Georgia State’s Daniel Peach was the leading scorer for the Hawks with 28 points. Jovante Spivey added 19 points, Cody Helgeland had 14 and Jevaughn Sanchez closed out the double digit scoring with 12 points.

The South Georgia State Hawks came on strong in the second half and were up by six points with less than eight minutes remaining in the game. South Georgia Tech had a chance to tie the game at the buzzer with a three point shot but it fell short.

The Jets and Lady Jets will travel to Marietta on Friday, January 9th to take on Chattahoochee Technical College in a conference doubleheader. The games will be played at 4 p.m. and 6 p.m. The South Georgia Tech Jets return to Atlanta for a conference match-up with Atlanta Metro on January 14th and then host Albany Technical College in the Hangar on Saturday, January 17th.