Luck leads Colts to upset of Manning and Broncos 24-13 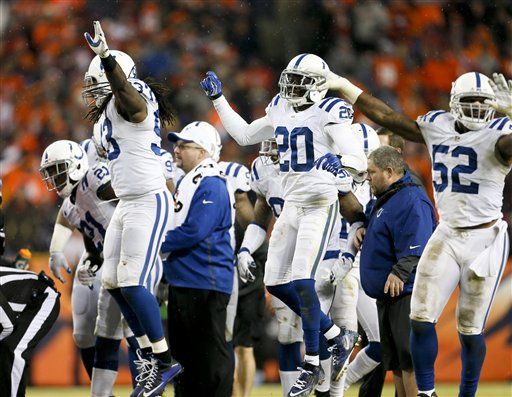 DENVER (AP) — Andrew Luck has his signature NFL win, and it came against his predecessor, of all people.

They sure were Sunday night in the Rockies, where Denver had gone 8-0 this season and averaged 35 points a game.

“I think we’re playing good team ball,” said Luck, who improved to 3-2 in the playoffs with his first road win. “We’re feeding off each other. Offensively we’re making enough plays to put some points on the board. Great night. So proud to be a part of the Colts in this victory.”

The Broncos (12-5) are left to deal with the hangover of yet another playoff debacle — and, more importantly, questions about Manning’s future.

After saying on Christmas Eve that he planned on coming back for an 18th season, the five-time MVP wasn’t so certain after his latest playoff fiasco.

Asked point blank if he planned on playing next season, Manning said, “Uh, yeah, I guess I just can’t give that simple answer, I’m processing it. So, I can’t say that. I could not say that.”

It was the first time Manning had been ambiguous about his future since spinal fusion surgery on his neck cost him all of the 2011 season and led Colts owner Jim Irsay to release him in 2012 so he could use the top pick to draft Luck.

“I knew it was the right thing to do for the Colts,” Irsay said outside his jubilant locker room. “I saw Archie (Manning) last night. We had a nice conversation. Happened to be at Elway’s Restaurant at the Ritz Carlton. It was a decision that it was the right move to make. Peyton and I had talked about it. He said it best in the press conference, I didn’t decide. He didn’t decide. The football gods laid the cards out. We both knew it as best for him and us.”

There’s sure to be questions about John Fox’s future, as well. He’s won four straight AFC West titles, but keeps coming up short in what he calls the “real season.”

The Broncos were the AFC’s only unbeaten team at home and the only team in the NFL with a top-five offense and a top-five defense.

“We picked a bad day to have a bad game,” said Terrance Knighton, who had guaranteed these Broncos, with an NFL-high nine Pro Bowlers, would hoist the Lombardi Trophy next month.

Manning has gone one-and-done in the playoffs a record nine times in his otherwise stellar career. That includes twice in Denver, where he’s 38-10 in the regular season but just 2-3 in the playoffs.

Overall, he’s 11-13 in the postseason and this was one of his worst playoff performances ever. He never found a rhythm, constantly overthrew his receivers and finished 26 of 46 for 111 yards, one TD and no interceptions.

“It’s just disappointing. Everyone would like to win their last game of the season,” Manning said after guiding Denver to a TD on its opening possession and just two field goals on his final 11 drives.

Each of his three seasons in Denver has ended in humbling losses, to the Ravens and Colts at home after first-round byes, and to Seattle in last year’s Super Bowl.

These Broncos were better balanced with a grinding ground game and star-studded defense bolstered by John Elway’s signings of Aqib Talib, DeMarcus Ware and T.J. Ward to a guaranteed $60 million in free agency.

But none of them came up big Sunday and the Broncos were left to deal with yet another wrenching playoff loss.

Luck completed 27 of 43 passes for 265 yards with two TDs and two interceptions that were the equivalent of punts and no sacks.

“We needed to win the game for us. It wasn’t about Peyton or Andrew or anything like that,” Irsay said. “It was about just us trying to beat the Broncos. Again, this was the Colts vs. the Broncos, even though the quarterbacks mean so much.”

The Colts stretched a four-point halftime lead to 21-10 when Luck drove the Colts 72 yards in 11 plays, hitting Hakeem Nicks from 15 yards midway through the third quarter.

On fourth-and-1 from the Colts 36, C.J. Anderson eluded three tacklers in the backfield and gained 7 yards. But once again, the Broncos stalled and had to settle for Connor Barth’s 41-yard field goal that made it 21-13 with 13:50 remaining.

Luck then drove the Colts 54 yards in 13 plays, chewing up more than 8 minutes before Adam Vinatieri’s 30-yard field goal made it 24-13 with four minutes remaining in the half-empty Sports Authority Field.

After a Manning fumble, Luck hit tight end Dwayne Allen with a 3-yard strike to put the Colts ahead for good 14-7.

“It was an unbelievable performance by the guys on the road,” Irsay said. “Onward we go. We know the trails even get tougher.”

Notes: There were no significant injuries. … Luck improved to 5-1 in temperatures 40 or below. … Manning fell to 2-4 following a divisional bye. … The Colts were 0-4 against Manning, Ben Roethlisberger, Tony Romo and Tom Brady in the regular season.