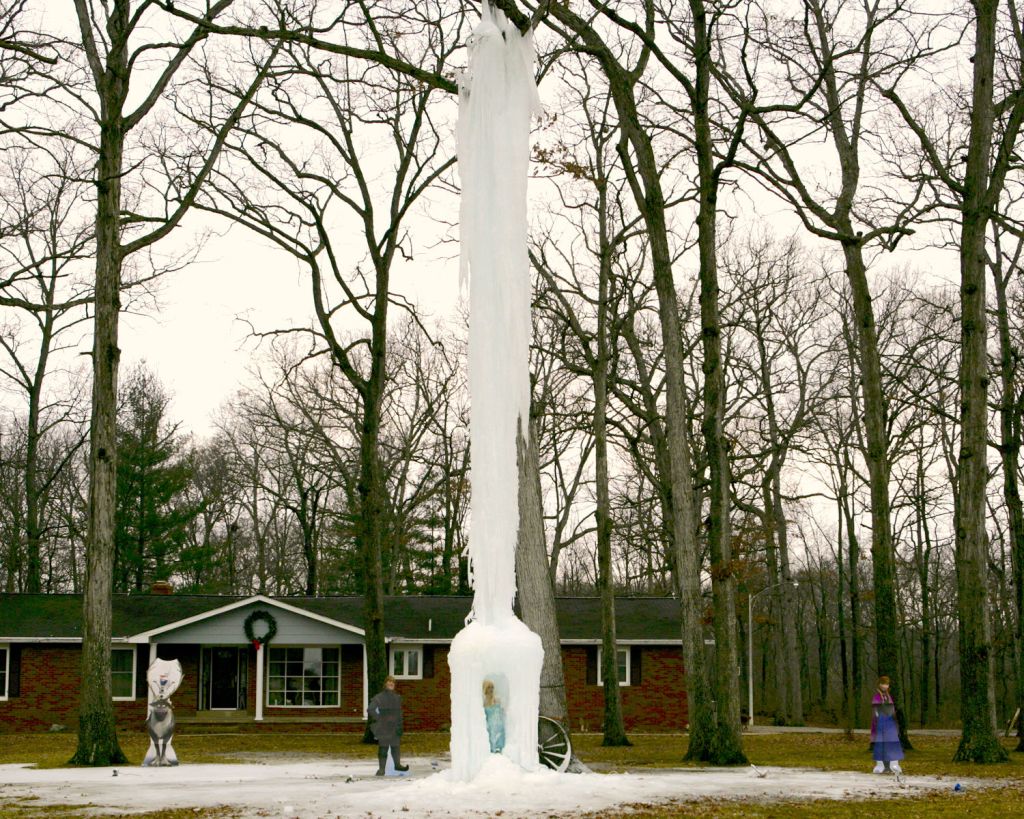 Along Highway 7, just south of St. Elmo, Illinois, a winding road weaves through farmland and wooded areas. It’s an idyllic spot for a country drive. And, for the past week, a dangerous one.

That’s because the 45-foot tall icicle in Katherine Ragel’s front yard is causing drivers to hit the brakes and gawk.

“I’m kind of worried about an accident because the vehicles will literally stop in the middle of the road,” Ragel said.

When the temperature dropped about two weeks ago, Ragel and her son, Garrick Moreland, saw their chance. Moreland climbed into one of of his mother’s trees, attached a hose, and turned on the water.

For eight days, the two monitored the icicle that was growing and kept the water running to keep the hose from freezing.

“You’ve got a one shot deal,” Moreland said. “Everything has to align just right for it to work.”

They put a mannequin of Esla from the hit Disney movie Frozen at the base of the giant icicle “since Frozen was so big this year,” Ragel said. To keep her from being entirely entombed in ice, Elsa was given a Plexiglas ceiling held up by four posts. But keeping the view of the character unobstructed by ice was difficult even with the shelter.

“It was constant work each day trying to keep her cleared off,” Ragel said.

When the Frozen-themed front yard was complete, her daughter, Sabrina Porter, suggested music to go with the scene. Speakers were mounted near the road. Now Ragel jokes that she has some regrets about agreeing to a soundtrack.

“I’ve been listening to ‘Let It Go’ all the time,” Ragel said.

And she’s been getting plenty of phone calls and knocks on her door.

“Oh yeah, people come ask to take pictures with it,” Ragel said. “I say ‘absolutely, just be careful of the ice.’ It’s a pretty big topic. People honk and wave.” But they may not be for much longer.

“It’s 17 (degrees) here right now,” Ragel said Wednesday morning. “But it’s supposed to be getting warm this weekend. I’m sure it will start to dissolve.”

The Ragels have made decorative, do it yourself icicles a sort of family tradition. The idea first came to Alan Ragel, Katherine’s late husband. He liked to build smaller icicles along the driveway, she said. About five years ago he asked Moreland — a tree trimmer — to try making an icicle from a high branch. He told Moreland how to do it. It worked.

This winter is the second time Moreland has created one of the giant icicles — the first time since Alan Ragel’s death in 2012. The last icicle grew to only about 30 feet.

“We’re still carrying this on the best we can,” Katherine Ragel said. “Alan always liked to do something unique. So he’d love all the traffic we’re getting. I’m sure he’s looking down and smiling on it.”