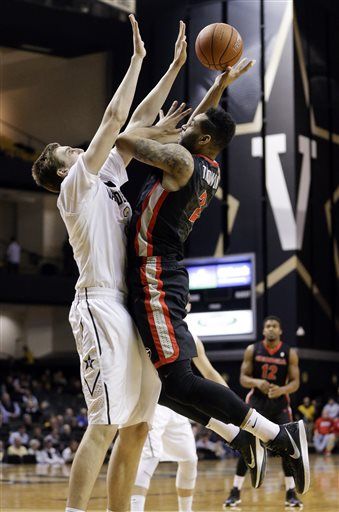 Thanks to some timely free throws, the Bulldogs left a gym where they have had little success over the years as winners.

Kenny Gaines scored 17 points, and the Bulldogs hit nine of their final 10 free throws Jan. 14 in holding off Vanderbilt 70-67 for their first SEC win this season.

“Our team played determined,” Georgia coach Mark Fox said. “Obviously, we’re staring at 0-3 in the league if we had not come away with a win.”

With the win, the Bulldogs (10-5, 1-2) also snapped a nine-game skid to Vanderbilt overall with their first win at Memorial Gym since the 2005-06 season and only their 14th overall in 68 games in this series.

“What do they call it, Memorial magic?” Fox said. “But we just finished at the free-throw line very well. I thought that was a big key.”

Georgia never trailed after scoring the first seven points. But the Bulldogs went cold after Gaines’ 3 with 5:53 left put them up 61-50, and Vanderbilt pulled within 63-61 with 28.4 seconds left on a 3-pointer by LaChance. Charles Mann hit a pair of free throws then Frazier hit five of his six attempts to seal the win.

“We don’t have a tremendous margin for error,” Stallings said. “We’re not that team, and a lot of things have to go right for us to beat really good teams. And Georgia, despite their 0-2 start, is a really good team.”

The Commodores outrebounded Georgia 36-27 to help them stay close and overcome cold shooting early as they hit only three of their first 12 shots. Only LaChance, scoring nine of his points in the first half, kept Georgia from running away early, and the freshman hit all three of his 3s in the final 28.4 seconds to keep it close late.

Gaines opened the second half hitting a 3, then followed with a dunk giving the Bulldogs their biggest lead yet at 35-22. But they couldn’t push the lead past 14 points.

The Commodores stayed close with an occasional 3-pointer, and Wade Baldwin IV hit their fourth of the second half followed by a bucket by Jones to pull within 58-50 with 6:23 left. Gaines simply answered with his fifth 3 of the game.

Georgia didn’t hit another shot from the floor, setting up a frantic final minute.

Georgia came in averaging 31.7 percent from 3-point range. The Bulldogs have shot well from outside this season, and they topped their season high of made 3s by one.

Georgia: The Bulldogs played without freshman Yante Maten, their 6-foot-8 center/forward, who suffered a concussion when hit by a car while in a crosswalk on campus Sunday night. They controlled the game so well coach Mark Fox had no need to play starter Yuwan Parker, who hurt his Achilles tendon in the second half of their loss to LSU.

Vanderbilt: Jones came in averaging 16.1 points a game and second in the SEC hitting 55.4 percent of his shots. The sophomore center missed all five shots he took in the first half. He credited the Bulldogs with being pretty physical. They also double-teamed Jones all night long.