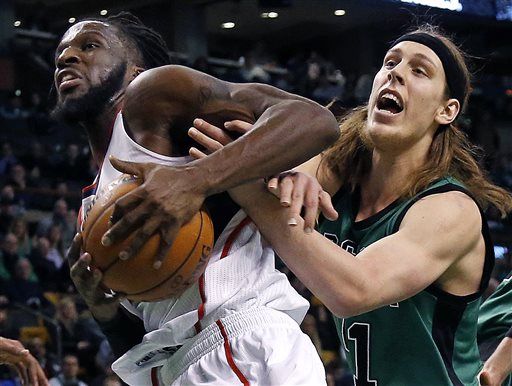 BOSTON (AP) — The Atlanta Hawks have the best record in the Eastern Conference and have won 10 straight for the first time in 17 years.

Life is so good for the Hawks, they even have the depth to platoon starters during a busy stretch.

DeMarre Carroll and Jeff Teague responded from a night off with 22 points apiece, helping the Hawks to a 105-91 victory over the Boston Celtics on Jan. 14.

“It’s just the start. It’s a long season, so we’re not too excited,” Teague said.

Not even a little?

The Hawks have their first double-digit winning streak since winning 11 in a row early in the 1997-98 season. They also have won 10 straight on the road, the longest streak in club history.

Teague, Paul Millsap and Carroll were well-rested after getting a night off Tuesday, when Al Horford led the Hawks past Philadelphia with his first career triple-double. On Wednesday, it was Horford and veteran outside shooter Kyle Korver resting up as their teammates easily took care of the Celtics.

“I don’t like it, but it’s Coach’s call and it paid off for us,” said Millsap, who had 18 points and 10 rebounds for his ninth double-double of the season.

Avery Bradley had 17 points and Jared Sullinger finished with 14 points and nine rebounds for Boston. Kelly Olynyk had 12 points and eight rebounds and Marcus Thornton scored 10 points for the Celtics, who never recovered after the Hawks blew open the game in the second quarter.

“I thought our offense was pretty poor all night and I think they’re obviously a difficult enough offense to guard,” Boston coach Brad Stevens said. “But when you give them run-out dunks it doesn’t help anything and we just turned the ball over too much.”

Boston had 17 turnovers, five during the second quarter.

Atlanta shot 63 percent in the second quarter, going 12 for 19 from the floor after being evenly matched by the Celtics through the first quarter. A 24-24 tie quickly turned into a 10-point lead for the Hawks, who answered every time the Celtics strung together a few points.

Boston pulled to 52-45 with 35 seconds left in the period, but the Hawks had one more surge before halftime. Teague hit a 3-pointer with 15 seconds to go and Millsap swiped the ball from Evan Turner and took it in for a layup just before the buzzer to give Atlanta a 57-45 lead.

Boston opened the fourth quarter with six straight points to pull to 89-80, but the Hawks put a quick end to the threat and cruised to another win.

Hawks: Atlanta improved to 31-8 overall and 15-5 on the road. … Atlanta continued to win through a stretch of four games in five nights. … Korver had played in all 38 games before the mandated night off Wednesday. The Hawks fared fine without him from beyond-the-arc, making 10 of 29 3-pointers.

Celtics: Boston’s latest acquisition joined two others picked up during the Celtics’ trading frenzy on the inactive list. Nate Robinson, traded back to Boston in a deal with Denver on Tuesday, and Tayshaun Prince and Austin Rivers were inactive as the Celtics continued reworking the roster for the future.

Stevens said the Celtics’ needs on the court are the same regardless of who is coming and going.

Boston Bruins defenseman Dougie Hamilton gave Boston fans something to cheer for even as the Hawks pulled away. Hamilton was shown sitting courtside during the second half on the big-screen monitor and received few chants of “Doug-ee!” The Bruins have won four straight and host the New York Rangers on Tuesday.