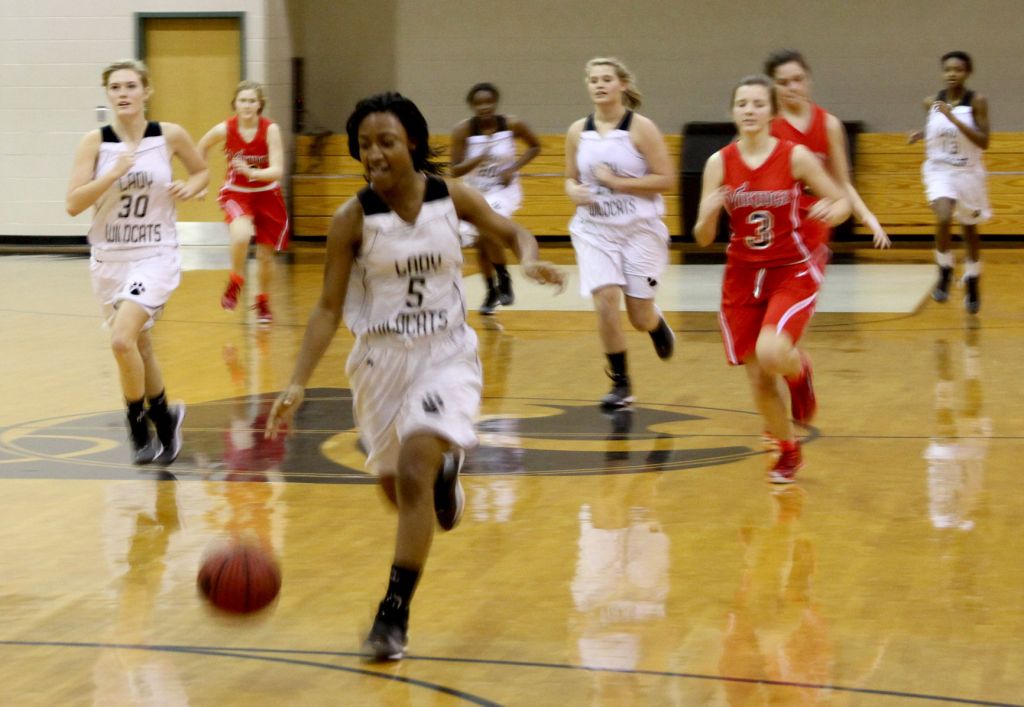 ELLAVILLE – Schley County’s Wildcat basketball team suffered a 58-50 defeat to the visiting St. Anne Pacelli Vikings on Jan. 13. The defeat marks the Wildcats’ sixth straight loss and brings the team’s season record to 12-3 overall and region record to 1-7 in the very competitive region 4A.

The Lady Wildcats defeated the Pacelli Lady Vikings earlier the same night, pulling in a 46-23 victory in the Ellaville region match. With the win, the Lady Wildcats improve their overall record to 5-10. The impressive victory put a halt to a six-game skid for the Lady Wildcats and logged their first region victory of the season.

The Wildcats took the court with freshman Christian Arnett (21) starting alongside seniors Ne’Kevious Sims (24), Kevin Poole (2), Lotravious Minter (23), and Matthew Williams (22). Pacelli took the tip and quickly put the game’s first points on the board. Schley responded moments later when Poole grabbed a pass under the goal and laid it up to tie the score. Schley took the lead at the five minute mark with a lay-up from Sims and Pacelli quickly caught up. At the 2:50 mark, Pacelli retook a brief lead that the Wildcats spoiled with a lay-up from Minter.

Pacelli sunk the first three-pointer of the game to gain the advantage and Poole sunk one from beyond the arc to answer. Pacelli’s shooters then went on a seven point scoring spree that ended the quarter with a perimeter shot at the last second. Schley entered the second frame trailing Pacelli 9-16.

The two teams traded possession for the first two minutes of the second frame before Pacelli began to pad their advantage with a string of three-pointers and lay-ups that put them ahead 26-9. This would be the Wildcats’ largest deficit of the match. With 2:40 left in the half, Calvin Sims (3) came off the bench to put the Wildcats back on the board with a three-pointer. Pacelli scored twice more before a pair of free throws and a lay-up by Minter alongside a three-pointer from Poole allowed them to narrow the gap to 16-28 going into the break.

The teams took turns scoring in the beginning of the third frame before a steal by Poole allowed Minter the opportunity to make a fast break. Minter was fouled on his way to the goal and brought the Wildcats within ten with a pair of spot-on free throws. A great block by Poole stalled the Vikings’ attempt at answering, but three field goals in their next possessions put them back up 40-26 with three minutes left. Poole and Sims sunk back-to-back shots from beyond the arc to put the Wildcats back into the game and Sims assisted Arnett in scoring in the last 30 seconds to leave the Wildcats behind 33-42 entering the final quarter.

One minute into the fourth frame, the Wildcats began to make a comeback when Sims grabbed a rebound and passed to Minter. Minter then passed the ball on to Williams, who returned it to Sims wide open in three-point territory. Sims drained the shot to add three to the Wildcats’ score. Another trey from Poole brought the Wildcats within three at 39-42. Pacelli put a halt to the Wildcats’ momentum and threw six more points on the board before Schley would have the opportunity to score again. The Vikings continued to pad their lead as the Wildcats scrambled to stop the bleeding. A lay-up by Poole, three free throws and a perimeter shot by Minter coupled with a lay-up by Williams still left the Wildcats down 58-48 with 11 seconds left. At the last possible second, Poole brought the Wildcats within eight by driving under the goal and putting up a shot from the reverse side to give the Wildcats a total of 50 at the buzzer.

The Lady Wildcats hit the court in their match having just suffered a 69-61 loss to the Marion County Lady Eagles on Dec. 9 and a 43-34 loss to the Quitman County Lady Hornets on Jan. 10. In the wake of these defeats, the Schley ladies seemed more than willing to give Pacelli a proper thrashing in the Jan. 13 region contest. The Lady Wildcats delivered just that, dealing a 46-23 blow to St. Anne-Pacelli’s lady basketballers.

Lady Wildcat head coach Jody Sellars stated “I hope we are hitting our peak now during the backstretch of region play. We are not out of the playoff picture by any means, but we have to rattle of a few wins in the next 10 games. We are 28th in the state out of public schools and they take the top 16. We could make a run if we win some games from here on out.”

The Wildcats and Lady Wildcats will face Pacelli on the court again on Feb. 3 in Columbus.

The teams will return to action on Jan. 16, facing the Greenville Patriots and Lady Patriots in Greenville.