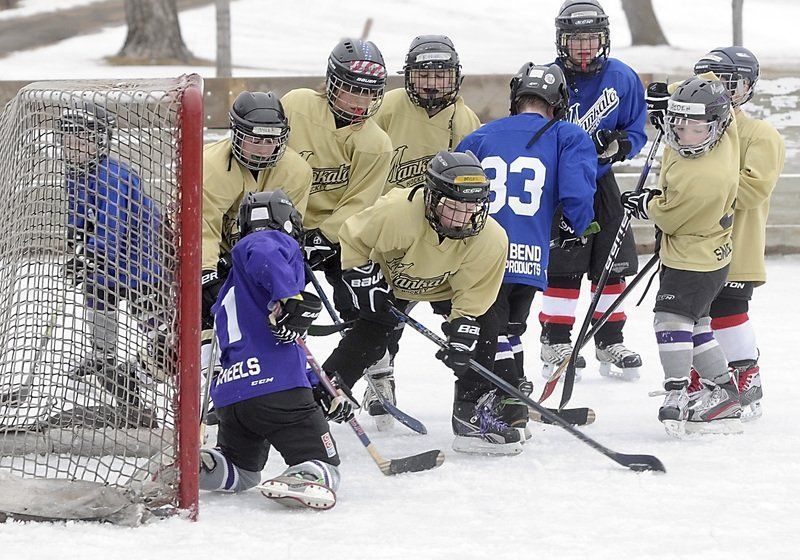 Local hockey teams in Mankato, Minnesota have an ironic, pressing problem — being unable to find ice in the winter.

“The strange thing is our problem is we’re growing,” said Mike Steindl, MAHA board president.

MAHA coaches said Mankato has several outdoor ice rinks but they lack the warming houses needed for young players to be able to practice for hours in cold weather.

But the winter’s yo-yoing temperatures thwarted MAHA’s efforts for the last six weeks. The organization was only able to give parents of the more than 50 Mite 4 hockey players (ages 7 and 8) a two-day notice of a practice held Saturday at Spring Lake Park’s ice rink in North Mankato because of the stint of cold weather.

The local space crunch, which mirrors challenges in many other Minnesota cities, persisted even after All Seasons Arena opened a much needed second ice sheet in 1999.

Steindl said MAHA has more than 375 players across all age groups, the most in its history. He estimated local space constraints impact the practice opportunities for 90 percent of their players. He said All Seasons Arena and the Verizon Wireless Center have tried to help them with finding times, but there is little they can do.

He said time availability in town often means young groups are practicing later, pushing even 8-year-old players to play as late as 10 p.m.

The space problem also impacts other groups, such as local figure skating groups. All Seasons Arena alone regularly has 16 to 18 different organizations vying for its time.

Jamie Kunst, lead coach for the Mite 2 and Mite 4 teams, said time constraints prevent younger players from getting the recommended 4-to-1 ratio of practices to games. He estimates players barely average a 2-to-1 ratio.

Steindl said MAHA has had to come up with increasingly creative ways to get in practices for younger players, especially when other cities aren’t available or a high school team’s rescheduling bumps their spot. He said they have done everything from finding ways to pack more kids into each rink to practicing on iceless gym floors.

A solution to the problem that many parents and coaches have been pushing for years is the creation of another ice sheet in Mankato or North Mankato.

Demand exists, said Mite parent Mike Drummer, but no individual or organization has yet officially stepped forward with funding for the project.

However, Steindl said the demand for ice is so big that even were MAHA to get exclusive use of a new ice sheet, they would only be able to fill 60 percent of their demand for ice time before moving to other rinks.

Kunst said many MAHA parents and coaches also are pushing for building warming houses at Mankato ice rinks, which would make them more usable for practices. He said the proposal would be a good supplemental step to the push for a new ice sheet.