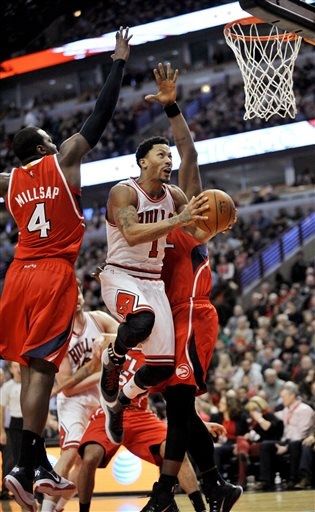 CHICAGO (AP) — The Atlanta Hawks are looking down at the rest of the Eastern Conference heading into the second half of the season.

With their efficient offense and stingy defense, Kyle Korver and company could be on top for a while.

Korver made a season-high seven 3-pointers on his way to 24 points, and the Hawks beat the Chicago Bulls 107-99 Saturday night for their 12th straight victory.

“I think we’re gaining confidence by the game,” Korver said.

The Hawks (33-8) have won 26 of 28 since a 7-6 start, surging to the top of the East with a balanced offense and sound defense. They closed out the first half of the season with impressive road wins over Toronto and Chicago on consecutive nights.

“I think they enjoy sharing the ball. They enjoy playing with each other,” Atlanta coach Mike Budenholzer said, “and they know that they’ll all reap the benefits of it if everybody plays unselfishly.”

Derrick Rose had 23 points, 10 assists and eight rebounds for Chicago (27-15), which has dropped five of seven. Pau Gasol had 22 points and 15 rebounds, and Jimmy Butler scored 15.

“There were lapses. It seemed like we were down and chasing them the entire game,” Rose said. “I don’t know when we are going to learn, but we have to learn quickly.”

Atlanta and Chicago also played on Dec. 15, with the Hawks winning 93-86 at home. It looks as if the gap between the division leaders has only increased since the first meeting of the season.

Korver had 12 points on 4-for-4 shooting from 3-point range as Atlanta led by as many as 14 on its way to a 48-39 advantage at the break. The Hawks jumped into passing lanes and used their active hands to disrupt Chicago’s offense, with the Bulls committing seven turnovers in the first quarter after they totaled seven during Friday night’s win at Boston.

It was more of the same in the second half. Each time Chicago made a run, Atlanta responded.

Korver had a four-point play that made it 80-69 with 11:09 to go. After Rose had a slick layup on the break that got Chicago within five, Horford buried a face-up jumper and Millsap made two foul shots to run the lead back out to 97-88 with 3:29 remaining.

“We’re a confident group,” Teague said. “We just know if we play the right way and play great defense and be aggressive defensively that we’ve got a chance to be in any ballgame. We’re just playing in a really good groove right now.”

The Bulls played without center Joakim Noah, sidelined by a sprained right ankle for the second straight game. The reigning NBA Defensive Player of the Year was scheduled for an MRI on Saturday, but coach Tom Thibodeau said before the game that he had not received the results.

Atlanta extended its franchise-record road winning streak to 12 games. The Hawks are an NBA-best 16-5 away from home after beginning with four losses in their first five road games.

Atlanta had dropped its last seven games in Chicago, counting the postseason. It was the Hawks’ first road win against the Bulls since a 103-95 playoff victory on May 2, 2011.

Korver was 7 for 9 from 3-point range as the Hawks went 11 for 26 from beyond the arc. They have made at least 10 3s in eight consecutive games.

Hawks: G Shelvin Mack exited in the first half with a left calf strain. … C Pero Antic got the night off. Budenholzer, an assistant to Gregg Popovich in San Antonio before he took over Atlanta in 2013, said he just wanted to give Antic a break.

Bulls: Rose went 4 for 10 from 3-point range and is 15 for 27 from beyond the arc in the last three games. … The Bulls have lost their last three at the United Center, dropping their home record to 12-10.