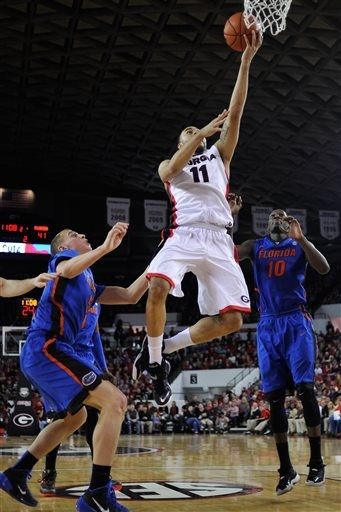 Thornton insisted he didn’t even know about Florida’s long run of Southeastern Conference wins until after he helped end the streak.

Georgia (11-5, 2-2 SEC) scored the first 12 points. Florida cut the deficit to two points early in the second half but couldn’t complete the comeback.

Florida (10-7, 3-1) had not lost in the SEC since falling to Mississippi in the 2013 SEC tournament championship game. The Gators were a perfect 18-0 in the SEC in 2014 before winning the conference tournament and then winning their first three SEC games this season.

“I didn’t even realize that until now,” Thornton said after the game. “We knew that we had to get a win and that was our goal.”

It was the second straight SEC win for the Bulldogs following a 0-2 start.

“It was a great bounce-back week,” said Thornton, who made seven of eight shots, most under the basket, and led Georgia with six rebounds. Thornton had one of Georgia’s four blocks, added three steals and had two assists.

Devin Robinson and Dorian Finney-Smith both had 11 points for Florida. Michael Frazier II had 10.

“They got loose at the 3-point line,” said Florida’s Jacob Kurtz, who had eight points. “Our pick-and-roll coverage wasn’t very good.”

Florida shot 50 percent — making 12 of 24 shots in each half. Coach Billy Donovan called it “a poor performance overall” and said Georgia “outplayed us in every facet.”

“I don’t want to take anything away from Georgia,” Donovan said. “They played a very, very good game, and in a lot of ways I was actually surprised it was as close as it was.”

The Gators were playing on short rest after beating Auburn 75-55 on Thursday night. The team practiced on Friday before traveling by bus to Athens.

J.J. Frazier, who had 11 points, sank two 3-pointers and Gaines added another 3 as Georgia raced to the 12-0 start. Florida’s first basket came on a layup by Kurtz almost five minutes into the game.

Georgia’s big lead of the half was 15 points, the last time at 21-6, but Florida chipped away with its press and ability to score inside. The Gators cut the lead to 36-31 at halftime.

Florida’s press helped force 16 turnovers, but the Gators had 19 giveaways.

Robinson opened the second half with a 3-pointer that cut Georgia’s lead to two points, but the Bulldogs didn’t falter. Back-to-back baskets by Thornton and Cameron Forte pushed the lead back to double figures at 50-40.

Georgia kept the lead in double figures the remainder of the game.

Florida: Michael Frazier II tied a school record by hitting a 3-pointer in his 39th consecutive game. He sank his first 3-pointer about three minutes into the second half and added another about two minutes later. Lee Humphrey had a 39-game streak in 2006-07.

Georgia: The game was a sellout at 10,523. Charles Mann scored 10 points. Sophomore Houston Kessler sank a 3-pointer in the first half, his first of the season and second of his career.

Fox said freshman forward Yante Maten (concussion) was cleared about two hours before the game. Maten wore a bandage on his right ear and had signs of other cuts on his face as a result of the injuries he sustained when he was hit by a car on campus, forcing him to miss Wednesday’s win at Vanderbilt.

Maten had four points, three rebounds and one block in 15 minutes.

Guard Juwan Parker (Achilles tendon) had one point in his return after missing one game.