Chewing gum likely cause of death for CAL U’s Clark 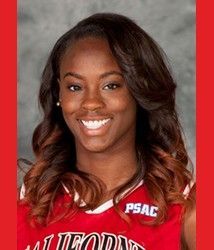 PENNSYLVANIA — A California University of Pennsylvania (CAL U) student athlete was found unresponsive early Sunday morning after possibly choking on gum in her sleep, authorities said.

Shanice Clark, a 21-year-old communications studies student and senior women’s basketball forward at CAL U, was found unresponsive in her apartment at Vulcan Village, according to a statement from the university.

Clark was taken immediately to nearby Monongahela Valley Hospital, where attempts to revive her were unsuccessful. The cause of her death has not been officially released, but officials say it appears to have been accidental.

“On behalf of California University of Pennsylvania, I extend my deepest sympathy to all of Shanice’s family and friends,” Jones wrote. “She will be missed by her teammates and coaches, her classmates, and by the entire campus community.”

While members of the Vulcans women’s basketball coaching staff and Clark’s teammates could not be reached for comment, CAL U Vulcans athletic director and senior woman administrator, Dr. Karen Hjerpe, also released a statement remembering Clark.

“Our heartfelt sympathy goes out to the family and friends of Shanice Clark, “Hjerpe said of the basketball player. “Shanice was a bright student and talented player…(and) her smile and personality will be missed.”

According to the CAL U Women’s Basketball website, Clark was redshirting this season after playing 24 games for the Vulcans last season. A native of Toronto, Ontario, Clark transferred to Cal U after playing two years at Sante Fe College in Gainesville, Fla.