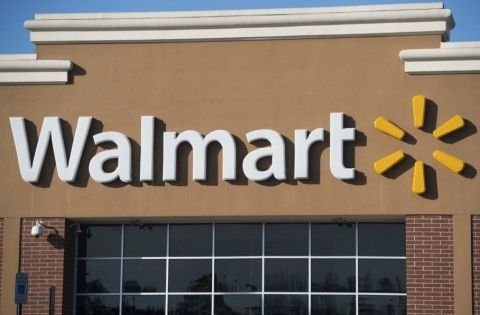 For the majority of taxpayers, the tax refund is a bonus that seamlessly shows up in their bank account each spring.

But Wal-Mart is giving another option to the minority of taxpayers who might otherwise wait for a check to hit their mailbox: pick up the refund, in cash, at any Wal-Mart store.

The move is the latest effort by Wal-Mart to target consumers who may not have a bank, who work mostly in cash, and for whom a tax refund is probably the biggest windfall they’ll see all year. “We know tax refunds can be one of the largest financial payouts of the year for many of our customers,” Daniel Eckert, senior vice president of services for Wal-Mart U.S., said in a statement.

Here’s how it would work. Taxpayers filing their tax returns at one of the 25,000 participating tax preparation locations could choose to pick up their refunds inside a Wal-Mart store. When the return is processed, refunds will get released to Tax Products Group (TPG) or Republic Bank & Trust Company, the banks Wal-Mart is partnering with for the program.

The banks will email taxpayers to let them know that their state and federal refunds are available. Taxpayers would then be able to pick up the cash – up to a maximum $7,500 – at any store through the Wal-Mart MoneyCenter or customer service desk.

Wal-Mart isn’t releasing a full list of the tax preparers participating and says consumers will need to ask their tax preparers if the program, called Wal-Mart Direct2Cash, is available. People who use online tax software, or who do their own taxes, wouldn’t qualify. The tax preparer may charge a fee of up to $7 for the service and Wal-Mart says it isn’t charging a fee for people to pick up the cash in store.

The company acknowledged Tuesday that the new program could make it easier for people receiving sizable checks – the average refund issued last year was about $2,800 – to spend some of that money in Wal-Mart. “It’s always a good thing, we believe, to have customers in our stores who have jingle in their purses and in their wallets,” Eckert said during a conference call.

Wal-Mart is going after a very particular type of customer. Because the option is only available through roughly 25,000 tax preparation locations partnering with the company, it excludes the millions of people who might file their tax returns online using tax preparation software.

And while about two-thirds of taxpayers receive tax refunds, the company is targeting the minority of taxpayers who still depend on snail mail to receive that cash. Of the 109 million tax refunds issued last year, about 77 percent were direct deposited, according to the Internal Revenue Service.

Because consumers wouldn’t access the cash any sooner than they would if they had the money directly deposited into their bank accounts – which the IRS does at no cost – it’s a sign that Wal-Mart is targeting people who don’t belong to a bank.

Wal-Mart has rolled out a slew of banking related services in recent years. In October, thousands of stores began serving as bank branches for GoBank, allowing people to make deposits or to open an account with the otherwise mobile banking platform. By then, Wal-Mart already offered a prepaid debit card, credit card, check cashing and money transfers.

The latest option is separate from the tax preparation services Wal-Mart already offers in 3,000 stores through a partnership with Jackson Hewitt.

But Wal-Mart is looking beyond banking in its efforts to get people to come into its stores. Last year, the Bentonville, Arkansas-based company partnered with an online insurance website to help customers compare (whether) Wal-Mart makes it easier for people to cash – and spend – their refunds in stores and enroll in health insurance plans. Earlier in the year, it began opening primary care centers inside of its stores.

With the tax season launching Tuesday, consumer advocates are warning about programs that charge people fees to receive tax refund checks they could otherwise access for free. For instance, the National Consumer Law Center cautioned that some paid tax preparers charge $25 to $60 for refund anticipation checks, which make it possible for people to deduct tax preparation fees from their tax refunds.

Wal-Mart says that for people who opt to get a paper check, its new program removes the worry over having a check get lost in the mail and that it can help reduce the steep fees some might face to cash in their refund checks.

For instance, some people may have to pay a check cashing fee of between 1 percent and 3 percent of the check account. On the average $2,800 refund, that would amount to a fee of $28 to $56. Some tax preparers may also charge a processing fee for issuing a refund check.

Still, the service isn’t faster – or cheaper – than having the money directly deposited into your bank.