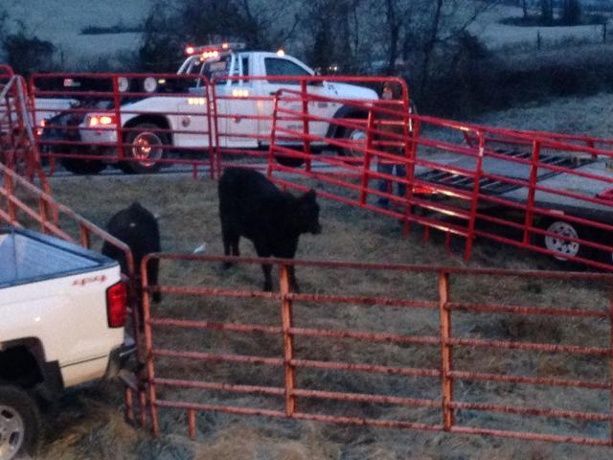 A truck carrying dozens of cattle overturned on Interstate 64 near Corydon, Ind., early Thursday morning, killing at least 20 of the animals and sending two people to a nearby hospital.

The accident, which happened shortly after 5 a.m., set at least nine cows free to roam near the roadway. One of those animals was killed when it was struck by a passing tractor-trailer.

Indiana State Police told WLKY-TV in Louisville that a 13-mile stretch of I-64 would remain closed for several hours while the accident scene was cleaned up.

The truck’s trailer, which was carrying 88 cows, was divided into four sections by metal partitions and was heavily damaged in the accident. Crews were working to remove the metal and free the remaining cattle.

According to WLKY, the dead cows will be processed for meat at a nearby facility and the meat will be donated to charity.

The driver and a passenger in the truck were taken to University of Louisville Hospital with unspecified injuries.