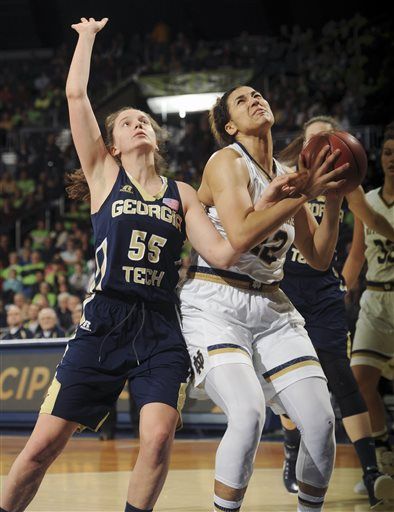 “I think one of the problems with a young team is they don’t understand that it’s not about winning or losing the game. It’s about how you play, the attitude you have, the toughness that you show. And we did not show any toughness,” she said. “We had no pride in our defense whatsoever.”

“They made runs at us and we were able to keep our composure, fight back and cut the lead to single digits several times throughout the game,” she said. “Every time Notre Dame made a run at us we regained our composure and went back at them.”

The Yellow Jackets (12-8, 2-4 Atlantic Coast Conference) shot 50 percent. The only other team to shoot at least 50 percent against the Irish was Miami, which who 53 percent in a 78-63 loss by Notre Dame. McGraw praised Reimer’s effort on the defensive boards.

“No one else did their job,” she said. “It was extremely disappointing to watch.”

Notre Dame had a 12-3 advantage in rebounding early in the game, but finished with just a 34-30 edge. McGraw said it appeared the Irish (18-2, 5-1) came out with “half effort” after wins at No. 12 North Carolina and against No. 5 Tennessee.

“You have to be ready for every single game. There’s no off days,” she said.

Notre Dame used a 10-0 run midway through the first half to open a 32-14 lead and appeared to be on the verge of breaking the game open. But Katarina Vuckovic hit a 3-pointer for Georgia Tech to spark a 20-8 spurt and the Irish led 48-41 at halftime. Notre Dame didn’t shake the Yellow Jackets until a pair of layups by Lindsay Allen and Reimer and a pair of free throws by Loyd with 5:33 gave the Irish a 17-point lead.

The Irish had a 14-0 advantage in fastbreak points and Brianna Turner added 14 points for the Irish, who shot 57 percent.

Notre Dame: Since losing at Miami on Jan. 8, the Irish have won four straight by at least 10 points. … It was the ninth time in the past 10 games they have shot 50 percent or better. … The Irish improved to 3-0 all-time against the Yellow Jackets. … Notre Dame plays at Georgia Tech on Feb. 19.

Reimer had her second straight strong game after missing the game against Miami after McGraw said she gave her time to think. She watched in street clothes against Boston College. She had nine points and 10 rebounds against Tennessee on Monday.

“I’m just trying to be aggressive and really focus on rebounds,” she said.

When Reimer was asked the reason she left the team for several days, a team spokesman and McGraw cut off the question.

“Let’s not go there,” McGraw said.

Georgia Tech: At Virginia on Sunday.

Notre Dame: At Clemson on Saturday.