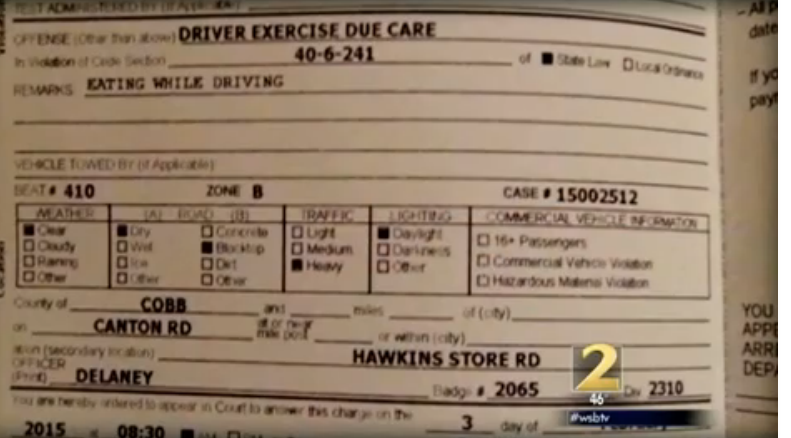 An Alabama man was issued a citation last week for driving under the influence of McDonald’s.

Madison Turner wasn’t speeding. He wasn’t driving erratically. He says he was just cruising his 2009 BMW down Canton Road with one hand on the wheel and a Double Quarter Pounder with Cheese in his mouth.

And according to at least one Cobb County, Georgia police officer, you just can’t do that.

Turner was pulled over and issued a citation for violating Georgia’s distracted driving law by, according to the ticket, “eating while driving.”

“The officer explained that he had observed me eating a burger for about two miles,” Turner told Atlanta’s WSB-TV. “He said specifically, three times, you can’t just drive down the road eating a hamburger.”

“If this was the law, I’d have to hire more attorneys, because everybody does it, including me,” said William Head, a traffic and DUI attorney in Kennesaw, Georgia. “There was no accident here, so the fact that this man was charged with eating and driving is a first for me.”

Turner said he plans to contest the ticket. But if Cobb County Solicitor General Barry Morgan thinks he can prove that driving while digesting did, in fact, make him unsafe behind the wheel, Turner may have a fight on his hands.

Applying makeup, reading the newspaper, or eating a burger — Morgan, who prosecutes traffic offenses, says it doesn’t matter what the driver is doing: Distraction is distraction, even if the tasty specifics of each instance aren’t spelled out in the law.