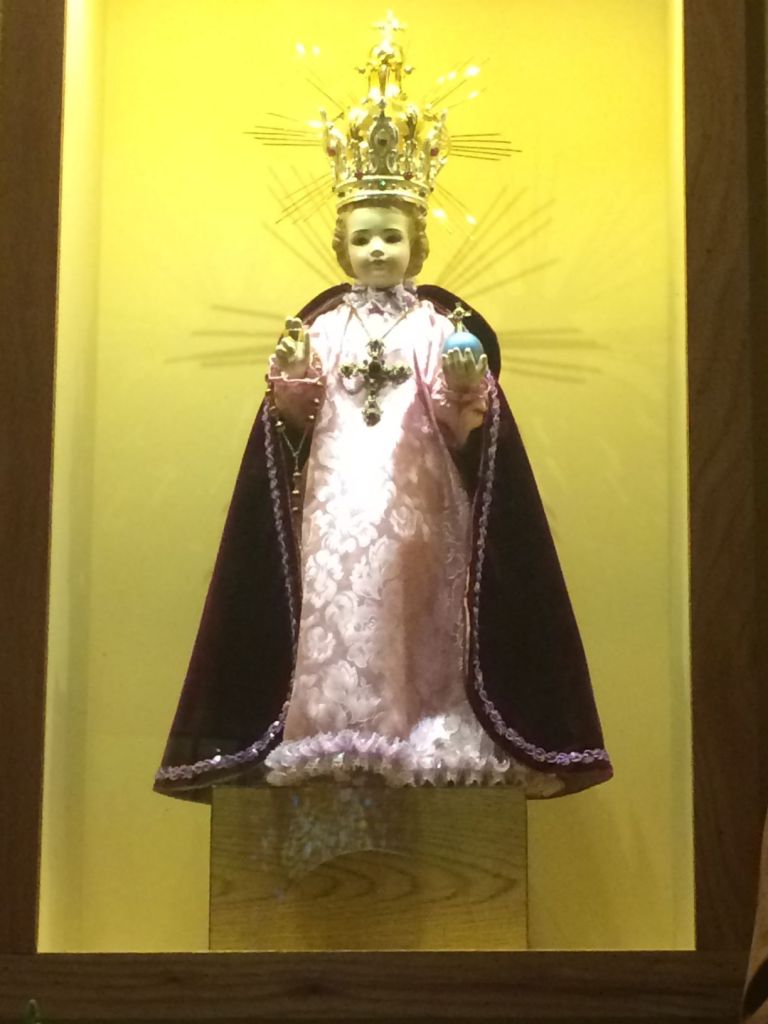 PRAGUE, Okla. — Most people who stop here come searching for something, and it’s not directions back to the highway.

St. Wenceslaus Catholic Church, in this town of 2,500 residents 50 miles east of Oklahoma City, is home to the state’s only recognized Catholic shrine.

A statue of Jesus as a baby, perched in a plexiglass display in the front of the sanctuary, brings nearly 80,000 pilgrims a year.

Most miracles attributed to the infant are small. But Rhonda Bartos, director of the National Shrine of the Infant Jesus, said he’s also credited for curing cancer, making a disabled woman walk again, and enabling couples struggling with conception be able to have a child.

Bartos acknowledges that Masses are sometimes distracted by visitors who arrive at every time imaginable. They tromp down to the front of the congregation to receive blessings bestowed by reaching inside a small opening and touching the infant.

(The church also has relics including a piece of the Holy Cross upon which Jesus was crucified, a sliver of Jesus’ manger and a piece of bone from Saint Wenceslaus.)

Today the church, named for the martyred, first-century Bohemian duke, feels welcoming but commercialized. A large gift shop seems to rival the size of the sanctuary, itself.

The church is also the first in America to have a vending machine for candles.

But this statue and the church both sprang from humble beginnings.

The statue arrived in Prague in 1947, a gift from the Sisters of Mercy in California. The priest at the time, Rev. George V. Johnson, had traveled to California to care for his critically ill mother, when the nuns gave him the statute — similar to one usually kept in Catholic kitchens as symbolizing never being without food.

The infant is 18 inches tall and blonde haired. His left hand holds a miniature globe with a cross, symbolizing Christ’s kingship. His right hand is extended in blessing with two fingers upraised to symbolize the dual natures of Christ.

The nuns made the priest promise to honor the statue, so he placed it in the church.

One night the priest, hoping to help his small congregation expand into a new church, was walking inside the church when his eyes met those of the Infant Jesus.

Bartos said the Infant Jesus spoke to the priest: “The more you honor me, the more I will bless you.”

Donations flowed in. The new church was built. A shrine was dedicated; it’s now just one of 123 Catholic shrines in the United States.

The statue has been celebrated with a wardrobe even the most fashion-conscious would envy. It has clothes and jewelry to wear for every special occasion.

For years, it perched on a shelf in the sanctuary. But Oklahoma’s recent spate of earthquakes put the statue at risk, and even knocked the crown from its small blond head.

So, for safety, the Infant Jesus is now behind glass.

And the infant hasn’t just blessed the St. Wenceslaus community. It helps others, too.

Bartos said it is routinely credited with performing miracles.

So it is that many pilgrims find their needs fulfilled, and their prayers answered, thanks to this small shrine in remote Oklahoma.