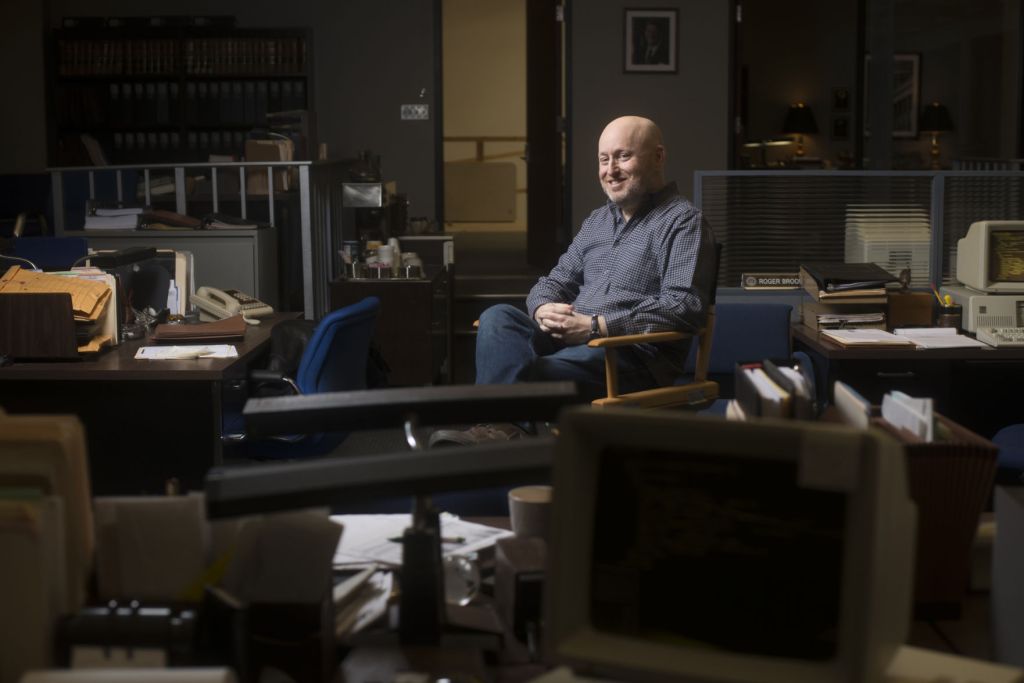 NEW YORK – The place in Brooklyn looks like a CIA safehouse. Red brick office building with peeling metal awning. No sign. Inside, writers are plotting out the popular Cold War espionage show “The Americans” – one of an assortment of Hollywood spy or national security dramas being driven by ex-spies.

The show’s creator and co-head writer Joe Weisberg is a former CIA officer who never fathomed he would one day sit in an office with Soviet propaganda posters and a cut-out figure of President Ronald Reagan, concocting television fiction.

“When I left the CIA, if you were going to ask me, ‘Would you write about espionage?’ I’d say, ‘Absolutely not. It would be a betrayal,’ ” said Weisberg, 49, a spy-turned-novelist who got tapped by Creative Artists Agency in Los Angeles to write television scripts. “I had never heard of CAA before. Now that’s like the CIA to me. It’s this huge thing in my life.”

The career afterlife of a CIA official has typically followed well-known paths: Work for a private military contractor. Launch an “intelligence-driven” LLC. Join a law firm. Consult for the CIA. Write a memoir. But the hunger for espionage on TV and movies in recent years is cracking open new career opportunities for ex-CIA personnel with a flair for drama.”Hollywood tends to be a destination spot for a lot of Washingtonians,” said David Nevins, the president of Showtime, which produces the spy juggernaut “Homeland.” “There was the ‘West Wing’ crowd of former politicos. I’ve met with more than one former Navy SEAL. And now, certainly the intelligence community has been the most recent in a long line of Washingtonians trying to come out and tell their stories.”Weisberg, whose show begins its third season on FX on Wednesday night, is perhaps the most successful of the CIA alumni who have infiltrated Hollywood. “The Americans,” about two deep-cover KGB operatives living in suburban Virginia in the 1980s, was ranked by many television critics as one of last year’s top 10 shows.

But Weisberg, who left the CIA in 1994, is hardly the only ex-agency guy trying to cash in on the spy show craze. (Spy shows, one executive at a major Hollywood talent agency observed, have become as ubiquitous as cop shows.) Former senior CIA officials Rodney Faraon and Henry “Hank” Crumpton are the executive producers of NBC’s “State of Affairs,” which stars Katherine Heigl as a CIA analyst and member of the agency’s presidential daily briefing team – one of Faraon’s old jobs.

(In the show, Heigl is technically a briefer to the president; in real life, Faraon was a briefer to an agency director, George Tenet.)

Faraon and Crumpton aren’t stopping with “State of Affairs.” They are actually developing a dozen other CIA-themed dramas, either for television or movies, all part of their work at an Arlington, Virginia-based firm they co-own called Aardwolf Creative. (CIA buffs and insiders know that “Aardwolf” is the code name for special, very candid cables to headquarters sent by agency station chiefs.)

“The CIA is sexy, especially since [the Sept. 11 terrorist attacks], there’s more transparency into what the agency does, particularly as it prosecutes the war on terror,” Faraon said. He mentioned USA Network’s “Covert Affairs” (which was recently cancelled after five seasons), and yet another spy show on NBC premiering Feb. 5 called “Allegiance.”

Other former agency employees have sought Faraon’s advice on breaking into the industry, too, he said. He and Crumpton got into the business after Crumpton’s memoir,”The Art of Intelligence,” was published in 2012. Hollywood executives were interested in acquiring the rights, but Crumpton was concerned about losing control over his story, and asked Faraon for advice.

“From a business perspective, the revenue stream would be much greater than selling the rights to your stories,” Faraon said.

Since their launch, he said, “[State of Affairs] has been generating a lot of buzz in the alumni community that we’re the real deal. There’s been a couple of folks who come to us with an idea, asking if this might make a good TV show or movie. Others come to us and ask, ‘How do I get noticed by the industry, and ‘What are you looking for?’ ”

Many former CIA officials tiptoe into Hollywood by writing books, getting them optioned, and consulting on whatever project results. That’s how Valerie Plame, a former covert operative whose cover was blown when her name was leaked to the media, got her start. She worked on “Fair Game,” the movie based on her memoir. Then she served as a technical adviser on the pilot of “Covert Affairs.” Now she’s a consultant to Warner Bros. Television, advising on shows such as CBS’s “Person of Interest.”

Robert Baer, a former CIA officer whose book “See No Evil” was turned into the George Clooney movie “Syriana,” is following a similar path. Building on the success of “Syriana,” he’s now writing scripts and producing. Last year, Baer co-wrote a script for Columbia Pictures for the sequel to the Angelina Jolie spy movie “Salt,” though Baer said it’s unclear whether the film will ever get made. He’s also working as an executive producer developing a Navy SEAL show.

Baer considers consulting gigs a “sort of a chump game. It doesn’t pay. You’re not really even a player. You don’t get invited to the premieres. You have to be able to write to make it in Hollywood.”

But John MacGaffin, a former deputy spymaster for the CIA’s clandestine service, loves to consult, even if he’s unpaid. He does it for “Homeland.” One of the show’s earliest writers, the late Henry Bromell, was MacGaffin’s cousin.

Later this month, MacGaffin will host an all-day session at the City Tavern in Washington for former CIA colleagues and the show’s writers, plus stars Claire Danes and Mandy Patinkin. He hosted such a meeting last year in the run-up to the show’s fourth season, which showed the CIA’s Pakistan station at war with the Taliban, a mole in the U.S. embassy, and tensions with Pakistani intelligence officials.

MacGaffin stressed that the sessions go nowhere near classified material. “If last year’s meeting was ‘Terrorism 101,’ this year’s will be a more advance discussion with a European focus,” MacGaffin said. “Espionage, disinformation, counterintelligence, cyberterrorism.”

Lindsay Moran, a former CIA case officer and author of the memoir, “Blowing My Cover,” wants to do more than be an adviser. She’s writing scripts and developing shows for Zulu 7, a media company that specializes in producing military and intelligence-themed television shows and movies.

But, much like spy-memoirists, spy-screenwriters face legal limits in their creativity.

Even though Faraon and Crumpton, the former CIA officers behind “State of Affairs,” don’t write the scripts, they did agree to show the agency’s Publications Review Board detailed outlines of every dramatic project their company is developing, to ensure no classified material gets on air.

Once the agency cleared their projects, Faraon’s and Crumpton’s partners, STX Entertainment, could begin developing the show. Even though the scripts don’t have to get cleared by the CIA, Faraon ensures that the show’s writers don’t unwittingly include dialogue that could expose the agency’s sources or methods.

“There are times when I say, ‘You got to take this out,'” said Faraon, though he doesn’t have ultimate control over scripts. “I try not to leave any tells. It’s a matter of us being responsible. But we also don’t want to take a Pollyannaish view of the CIA. That wouldn’t be authentic.”

In the case of “The Americans,” Weisberg must submit every episode’s script to the CIA. On occasion, the agency has asked him to remove “small things that are easy to change,” said Weisberg, who spends his days in his Brooklyn office. He works across the street from the fake bedroom of fake KGB illegals, a fake FBI office and a few blocks from a fake KGB office. (Fans of the show know it as the “Rezidentura.”)

Weisberg laughs about his unexpected foray into Hollywood. When he was taking a polygraph at the CIA in the early 1990s, his polygrapher asked a prescient question: “He said, ‘Are you going to the CIA because you are looking to learn things about espionage so you can write about it one day?'” Weisberg recalled. “It never occurred to me. But then I thought later, ‘Huh, that’s not a bad idea.’ ”