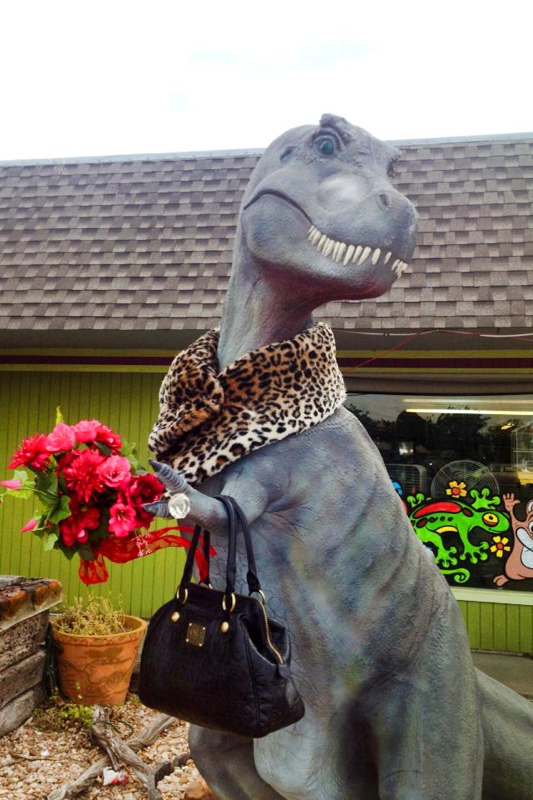 She told one of her employees to call the man back and tell him never mind. It was a joke, a whim, and buyer’s remorse set in almost immediately. Nine-hundred dollars for a nine-foot dinosaur? What was she going to do with a $900 nine-foot dinosaur? That was nearly ten years ago.

Now Kathy Keim doesn’t know what she’s going to do without her nine-foot dinosaur.

The fiberglass Tyrannosaurus Rex model has become a landmark along Washington Blvd in Bartlesville, Oklahoma. Because when the seller showed up a week later–her employee forgot to call–looking for his money, Keim paid him and did the only thing she really could do.

She just put it up outside in front of her business, Classic Pets.

“We just thought the kids would love it,” Keim says.

It didn’t take long for it to become the pet store’s mascot, thanks in large part to the costumes it donned over the years: A cap and gown come graduation season, a wedding dress and veil come wedding season. Aprons and turkeys at Thanksgiving. A hula skirt and bikinis in the summer.

“We get kind of bored easily,” Keim laughs.

“It was so fun to watch when she was dressed up like a bride because people would come pulling in with ‘Just Married’ on their car and take a picture and be dying laughing,” Keim says. “The little kids, when they get out, they just walked up to it with their eyes all big. They don’t want to leave it. It’s kind of sad, really.”

The 200 pound statue was stolen Sunday morning in broad daylight, an act so brazen the Bartlesville residents who say they witnessed the heist thought nothing of it.

Keim, who says she initially thought “about trying to be sneaky and track it down on Craigslist,” says numerous people contacted her after she sounded the alarm about the dinosaur’s disappearance on Facebook.

“I have about ten people telling me the same story,” she says–a man, a woman, a dark pickup truck with bed cover that wouldn’t close… because there was a dinosaur in it.

Someone says they saw the truck drive by when they were eating breakfast. Someone spotted it at the tractor supply place. Keim says a police officer told her he saw a dinosaur heading south on I-75 toward Tulsa.

With all the leads, Keim’s hopeful she can quickly get the dinosaur back in front of Classic Pets where it belongs. She’s offering a reward to the person who can make it happen. How much? She won’t say.

“But they will be invited to the coming home party,” Keim says. “They’ll have a place of honor.”

Those with information about the dinosaur’s whereabouts can contact Bartlesville police at (918) 338-4001.