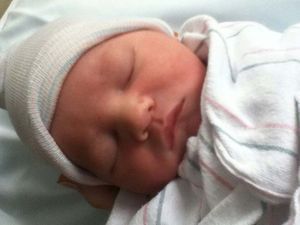 As two feet of snow turned Salem, Massachusetts into a virtual ghost town Tuesday, about a dozen lives were being celebrated at area hospitals.

Five “blizzard babies” were born at Beverly Hospital during Winter Storm Juno — four from parents arriving during the blizzard, and one from a family that arrived before the storm, according to Rebecca Gadon, director of maternal newborn services and cancer services at Beverly Hospital.

By Tuesday afternoon, six babies were born at North Shore Medical Center, including one set of twins, according to Casey Chuy, the hospital’s senior marketing manager.

“They all have interesting stories to tell,” Gadon said. “For women having babies, in labor, there’s always that thought in the back of your mind — you don’t want to have the baby while you’re on the way to the hospital or stuck on the road.”

One family is thankful they lived right around the corner from a hospital, close enough to say it was in their neighborhood.

Still, it took about five minutes to get to Beverly Hospital once Micah Thomas Bartley decided it was time to enter the world, according to his mother, Sarah Bartley.

“I was due on Sunday,” Sarah said. “We wondered if this baby would be a pain… but we didn’t expect this at all.”

As Sunday came and went and blizzard warnings grew more dire, so too did Bartley’s belief that her son would be a blizzard baby.

“It probably sunk in Sunday morning, as there was a big storm coming, two or three feet of snow, and we were like, ‘oh, man,’” Sarah said. “I had a pretty good idea that this baby was going to be born in the blizzard.”

So the Bartley’s prepared. They asked a family friend to stay at the house before the storm to watch their three-year-old son Silas if necessary. A neighbor with a snow plow was also on standby if a trip to the hospital was necessary.

By 7:30 a.m. Tuesday, more than a foot of snow was on the ground when Bartley went into labor.

“When I was ready to go in, thankfully we had really wonderful neighbors and one of them have a plow,” Barley said. “We woke him up and he came out and drove ahead of our car so we could get to the hospital safely.”

The family was checked in by 8 a.m. Three hours later, they had a new, eight pound baby boy.

“It’s nice to have a fun story,” she said. “We’ll always have that fun story to tell him when he’s older, about how exciting it was and how well we were cared for by our friends.”